To nullify or not: Senate Bill 8 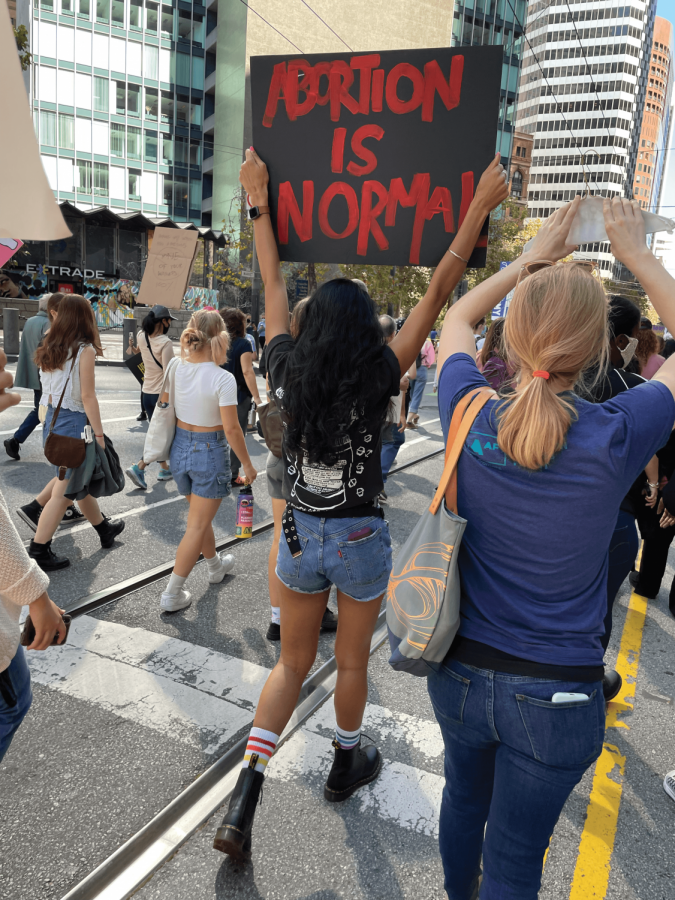 On Sept. 1, a new abortion law in Texas was enacted, severely limiting access to abortions in the state. This law, Senate Bill 8, prohibits abortions after six weeks into pregnancies, including circumstances of rape or incest, with the only exception being abortions for a medical emergency. The law received national attention and was brought to the Supreme Court weeks later. The overall majority of Supreme Court Justices — five to four — refused to block this controversial abortion law just before midnight on Sept. 1.

Hundreds of thousands of people all over the U.S. began to speak up through protest and other methods of advocacy. Even beyond the borders of Texas, many declared that Senate Bill 8 was unconstitutional and a violation of womens’ rights. Senior Lola Zirpoli has maintained a strong opinion about this law since enacted and has advocated her beliefs through protesting in San Francisco.

“I feel like I should be able to do whatever I like with my own body,” Zirpoli said. “It is very violating to think that not only can I not choose, but to think that a man would be choosing for me.”

Zirpoli’s viewpoint is widespread; a December 2020 Bark Survey revealed that 79 percent of students are concerned or somewhat concerned about abortion access being threatened in California, or the U.S. as a whole. As a result, multiple lawsuits against this bill have arisen throughout the country. In response, the Supreme Court decided to reconvene on Oct. 22 to reexamine the legislation.

The Supreme Court is having trouble navigating the constitutionality of the law due to Texas’ attempts to avoid the nullification by not making a direct ban on abortion itself. Senate Bill 8 allows for anyone who witnesses or has knowledge of an abortion to sue the patient. Due to this, if the Supreme Court decides to nullify the law, they will have to ensure they do not hinder free speech.

David Minhondo, a social studies teacher at Redwood, has been paying close attention to the advancements regarding the abortion law within the Supreme Court and believes the Supreme Court is in a difficult situation due to the constitutionality of the law.

“I am not 100 percent sure what the court will be able to do,” Minhondo said. “[The Supreme Court] isn’t going to say, ‘individuals cannot file lawsuits against each other’ [because] if they do that, they are uprooting an entire part of our justice system.”

The Supreme Court is currently hearing oral arguments on two cases, one against Senate Bill 8, and the other challenging a Mississippi abortion law. Mississippi, along with 19 other states, has followed in Texas’ footsteps, enacting abortion restrictions in 2021. However, Mississippi’s new law, banning abortions after 15 weeks, directly challenges the constitutional abortion rights established by the landmark case, Roe v. Wade, in 1973. On Dec. 1, the Supreme Court started the oral defense for Mississippi abortion restrictions, which could be used to weaken or overturn the Roe v. Wade decision.

“To me, Mississippi has a more national effect than the Texas law,” Minhondo said.

Senior Molly Pitts has concerns about the effects of Abbott’s new bills, especially as she knows several families living in Texas who would be directly impacted.

“[The families I know] felt strongly about [the law] in the sense that they obviously felt this was a step backward,” Pitts said. “The parents were also worried that it was getting to a point where they would have to move away if they did not [already] have prior plans [to move out of Texas]. They didn’t want to live in a state that would restrict their daughters’ access [to abortion].”

With all of these court cases and decisions, many protesters, including Zirpoli and Pitts, hope the Supreme Court will come out with their verdicts soon. Before the ban in Texas, 84 percent of the women seeking an abortion were more than six weeks pregnant, severely limiting their chances to abort without conviction. With this being said, the Supreme Court Justices are not hearing trials every day. Their schedule is structured for oral arguments every Monday, Tuesday and Wednesday with no public sessions on Thursday and conferences on Friday. On Saturday, Sunday and federal holidays there are no hearings. This schedule does not allow the Supreme Court to consistently make advances on their cases.

“If you have such an incredibly important position and you aren’t working the amount that most do when they have these high positions, I think things should need to change,” Pitts said. “I am not saying work [the justices] to the bone or work them 24/7, but I do think that [how much they are working]  should come into question.”

With the current debate in the Supreme Court, there is no set date as to when their verdicts on the various abortion cases will come out. During this time, women across the world are praying for a positive outcome that does not further suppress their rights.

“As a woman, [this law] does not make me feel confident in our country’s morality because [if] they think it is ok to take these rights away, what is next? It took us a long time to get voting rights, is that going to go away next?” Pitts said. “At this point, I am not putting anything past our government.”