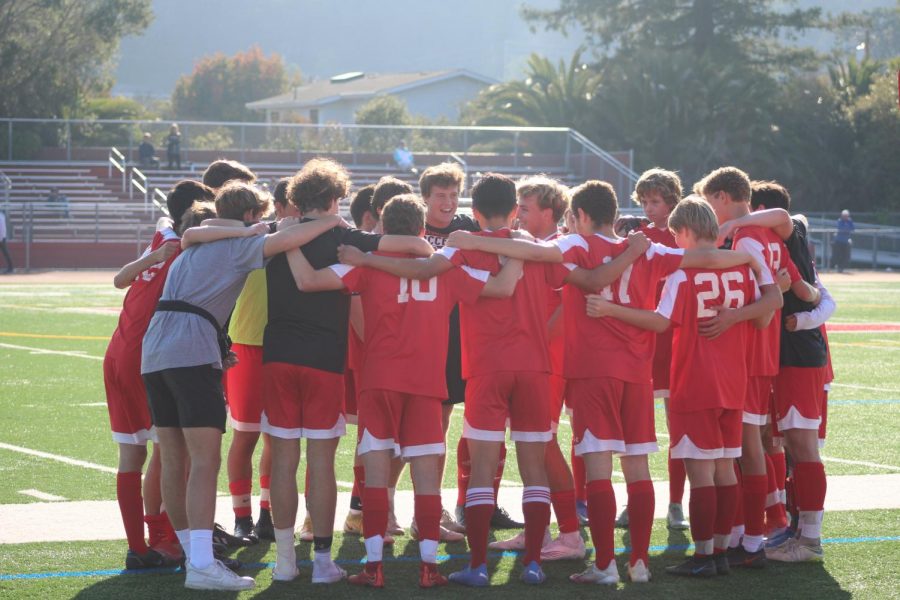 The boys’ varsity soccer team came ready for their match against Marin Catholic (MC) on Saturday, Dec. 4, winning with a score of four to zero at Redwood’s Troppman Turf Field. The team has worked on their skills for the past three weeks in order to become one cohesive unit, able to dominate any opponent it plays. Hours of training paid off this weekend, as the team was able to use tactics learned in practice to have a victorious game.

The game’s first half started strong as the first goal was scored within five minutes of play by senior Dave Mazariegos. Mazariegos scored the goal off of a free kick, something the team had been working on in practice.

Senior striker Jacob Smith said that Mazariegos’ goal was critical, as free kicks have been difficult for the team in the past few weeks.

“Mazariegos’ goal was exciting and uplifting since it was less than five minutes into the game. [After that] we were buzzing and going hard. [Mazariegos] lifted the team up and gave us more energy,” Smith said.

Mazariegos and Smith worked together throughout the game to keep the ball away from the opposing team and create scoring opportunities for one another. Smith scored a goal later in the half, assisted by Mazariegos.

“I give [Mazariegos] all the credit. He had a great shot and created the chance for me,” Smith said.

Another strategy that the team worked on in practice was “pressing” the opponents’ offense to keep them away from the goal. This strategy worked well in the match, as the defenders were able to keep MC’s strikers away from the Giants’ goal.

Senior right wing Matheus Lonning is appreciative of the team’s focus on this skill, and he believes it played a part in their success against MC.

“We try to start the defense up forward, making [the other team] go deep. The defense is the biggest thing we’ve improved on [in practices] which helped us out a lot,” Lonning said.

Mazariegos also notes the importance of staying strong mentally and not getting discouraged. He claims the team’s success is dependent on their mentality, and that if they have a negative mindset, they will not end up doing as well.

“You play how you practice. [It is important to have] the mentality that we can do better and win this game,” Mazariegos said

Smith and Lonning mentioned that one notable aspect of the team is their connection; the players get along well and have exceptional chemistry. Lonning emphasizes that having such a tight knit team is what makes them strong. In addition, Mazariegos says having a close group encourages the boys to do better, rather than discouraging each other if they make mistakes.
“We act like a family. We are always there for each other and pushing each other to do more and [be better],” Mazariegos says.

“We’re focused on winning one game at a time and not getting too far ahead of ourselves. But, I am confident we can make it all the way [to states],” Smith said.

Looking forward, the Giants are confident that their winning streak will continue. Their next game will be played on Dec. 8 at 3:15pm on Redwood’s Troppman Turf Field.