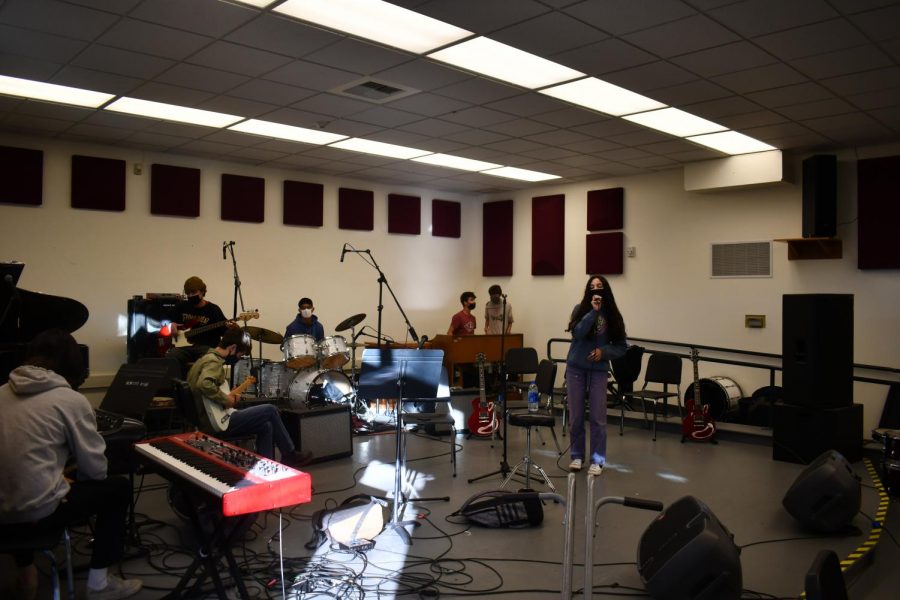 “We are a very distinctive band that plays a unique mixture of genres. Many people across the music department come to our practices to join us, and we have several songs ready to perform,” Pianist Jack White said.

From folk to country to rock music, Redwood’s newest band, the Bargain Market Quartet, can play it all. Their unique name was created during their Advanced Performance Workshop (APW) class by comprising the names of bands they were previously in to generate The Bargain Market Quartet. The band consists of 6 seniors; Jack White, Griffin Dione, Evan Miller, Bodhi Bartle, Aiden Tribolet and Agneya Poduval. Each member is specialized in playing a particular instrument, adding to its diverse sound. Although the band is in its beginning stages, they have several songs in the works and are set to perform in the music department’s annual winter concert on Jan. 17, as well as several solo concert dates planned for the spring semester.

Senior Evan Miller, a four-year member of Redwood’s music program and one of the lead guitarists in the band, is looking forward to witnessing the group’s skills progress.

“The band is really new. It was created at the end of September. We all have very similar tastes in music, [which is] part of the reason why we created the band,” Miller said.

“With the opportunities and resources that are provided to us by Mr. Mattern, I believe that we can get a lot bigger and make an impact on Redwood’s music department,” Miller said.

After spending countless SMART periods together playing music, the Bargain Market Quartet was formed. Despite being in its pre-productive stages, the group members have made significant improvements due to their dedication.

“[The members of the band] and I always go to the music room during SMART and jam. Jack is always bringing some new folk music for us to play, and we just mess around and try to play the whole song. It’s always just such a great time,” Miller stated.

Mattern mostly assigns his students to play songs in the rock, country or folk genres, so the band intentionally concentrates its songs within these genres in order to highlight their strengths. The group noted that Mattern’s expertise played a significant role in the creation of the Bargain Market Quartet, as well as their artistic process.

“[Mr. Mattern] was extremely supportive when our band was just an idea. He gave us a lot of great advice and insight on what goes on behind the scenes of a band, and he often comes and plays with us during SMART period,” Miller said.

The band records the majority of their songs at lead bassist Griffin Dione’s house, and the band hopes to begin releasing these songs by February of 2020. The Bargain Market Quartet will be playing with the rest of APW in their annual January concert, and are hoping to perform a few of their own songs for the Redwood community during music performances.

White, pianist and creator of the band, is extremely optimistic about their upcoming performances, especially the Night of Blues which will take place next March.

“We are working on having two songs done by [the Night of Blues], and Mr. Mattern told us that there is a possibility of letting us use the Christmas concert as a platform to get our band a little bit of recognition,” White said.

But before they are ready to hit the stage, the band recognizes the importance of solidifying their sound. Dione sees their hard work in the band room beginning to pay off.

“All of the hours that we spent together playing different kinds of music and brainstorming how the band will be created are finally producing results. All of the band members are extremely talented and enthusiastic about our progress, as well,” Dione said.

Dione emphasizes the band’s camaraderie, and appreciates its importance to their success.

“It’s always a great time hanging out with the band, and a lot of that needs to be credited to Mr. Mattern. We have definitely become a lot closer through playing music,” Dione said.