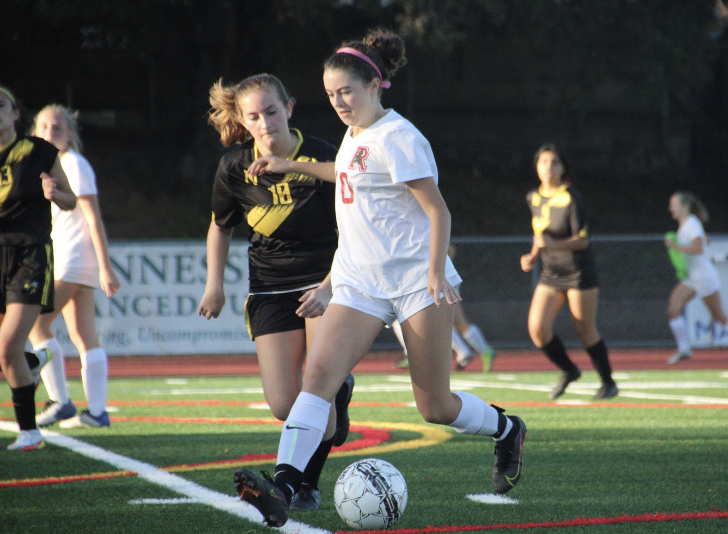 On Tuesday, Nov. 30, the girls’ varsity soccer team brought home a victory in their season opener against Novato High School, with a final score of 8-0. Each teammate, whether on the sidelines or on the field, was able to bring both tremendous energy and strong communication to the game. After weeks of training, the Giants were immediately able to recognize what moves were needed to score goals, sticking it to Novato with powerful headbutts, fast reflexes and deceptive approaches.

In the first half of the game, Redwood mainly kept the ball away from Novato’s goal, drilling down on their offensive skills and using the advantage of their strong defensive players. Within the first 10 minutes of the game, the girls scored three goals by getting around their opponents and rushing to the goal post as fast as possible. While the team managed to keep the ball at Novato’s goal for the most part, their goalie put up a good fight, blocking Redwood’s soft goal attempts.

Team captain Riley Anderson, who plays both center and outside back, maneuvered through her opponents with concentrated dribbles and explosive speed. She used these defensive techniques throughout the game to maintain a sense of trust between her and her teammates in the event that they needed to make a quick pass. Her defense was well-organized and she was able to get the ball out of the air quickly. By the end of the first half, the Giants’ spirit remained high as they scored goal after goal.

During halftime, head varsity coach Ivan Bandov gathered the players to discuss improvement methods that would allow them to come back even stronger in the second half.

“Attacking wise, we wanted to make the field as big as possible,” Bandov said. “When we do decide to change the tempo, [we] play fast and try to get forward quickly, which makes it tough for the opponent to react [to us].”

The Giants continued their scoring streak into the second half. Senior Briana Salvetti plays center forward and was determined to score as many goals as possible. She did so with a hat trick (three goals in the game) by attaining three unblockable kicks, giving the team a better chance to win.

Another team captain and center midfielder Avery Jones, who was unable to play as she is recovering from an injury, paid close attention to how her teammates were receiving the ball on their front foot.

“No matter what position [they were playing], everyone on the field was paying attention [to] keeping their bodies open so they could see all options,” Jones said. “[They were also] receiving the ball on their front foot so that they could drive forward into the attacking final third if given the opportunity.”

Jones is motivated for the future success of the team and is excited for what is to come at their next game. Being a senior on the team, she has high hopes for a successful year.

“This game was [kind of] a precursor for what’s to come. It was frustrating to sit on the sidelines, but knowing that there is a lot ahead and how much potential we have is exciting,” Jones said.

This esteemed and dedicated team will play their next game on Dec. 2 against Bishop O’Dowd High School in Oakland.