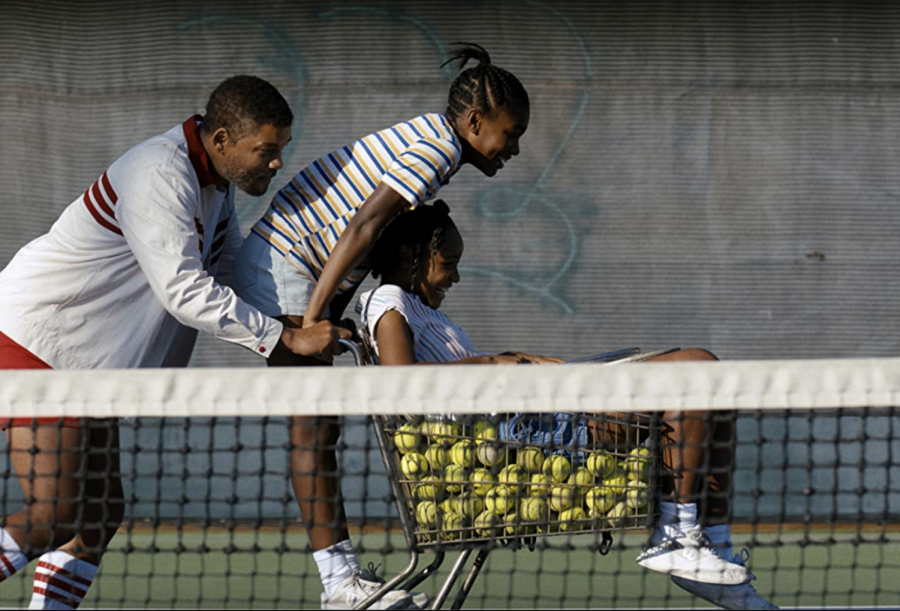 Many film-lovers tend to shy away from sports movies, as they are commonly dismissed as overdone cliches. King Richard, a dramatic biopic, is quite the opposite. Released on Nov. 19, King Richard depicts the early lives of tennis stars Venus (Saniyya Sidney) and Serena Williams (Demi Singleton) and the coaching of their ambitious father, Richard Williams (Will Smith).

The movie was inspired by the story of Venus and Serena and produced by Smith. The three used the film to tell the narrative through the underrepresented perspective of Richard. Initially a seemingly simple sports-centered story, King Richard portrays the persistence of the Williams family and develops into a humorous and striking watch.

The narrative of Venus and Serena Williams is well-known. Internationally recognized for their talent in tennis, both sisters made names for themselves by persevering, despite all circumstances being against them. The sisters were raised in a small Compton bedroom with limited resources, and playing an all-white sport as Black young women was challenging in itself. Venus and Serena were often refused coaching, as they could not offer compensation, and therefore relied on their parents to develop their tennis careers. Richard’s recognition in King Richard aims to show his role in the Williams sisters’ success.

Smith fully personifies the written character of Richard, perfectly attaining the charisma and liveliness of his personality. Not only does Smith effectively portray the passion behind Richard’s thoughts, but also the passion behind his decisions. It is evident that Richard greatly desires to further his daughters’ careers, as Smith uses his notoriously pensive facial expressions to clearly establish each thought behind critical decisions. By carefully pausing before speaking and eagerly reacting to criticism from professional coaches, Smith conveys the reasoning behind the controversial actions Richard takes. Smith explores the aggressive aspects of the father’s parenting approach, making the film all the more captivating. He makes it clear that the movie is not intended to focus on the athletic achievements of the Williams family or glorify the debatable parenting tactics of Richard. Instead, King Richard captures the shared quality of persistence within the Williams family.

In addition to the focus on Richard in the Williams sisters’ lives, the film highlights other family members. Raising five children, Richard and his wife Oracene Price (Aunjanue Ellis) were portrayed as obvious role models for their children. Though the film covers intense topics of family disputes and pressure, the lightheartedness of the Williams family brings an essential innocence to the plot. The personalities of all five children are conveyed through candid family moments. Home videos and family movie viewings bring the Williams family to life through humor and affection. Their family connection is a consistent factor throughout the film and can be found as a grounding point while watching the movie. Watching the family interact in a familiar way brings an additional level of comfort to the viewer, despite the obviously questionable parenting tactics and family dynamics.

While the effective portrayal of the Williams family was engaging, King Richard offered more than good acting. The soundtrack of King Richard is particularly notable. Including classics such as “California Dreamin” and “Welcome to Paradise” accurately reflects the inspirational and determined tones of the movie, as upbeat songs are paralleled with positive developments in the family’s life. Additionally, after the credits, real home videos from the Williams family are featured in a format that compares real-life footage to clips recreated in the movie. Incorporating real videos of the Williams family brings an additional layer of homeliness to the film, reinforcing the underlying message of the importance of family.

Despite the slight glorification of Richard, King Richard skillfully portrays the story of the world’s best tennis players through a fresh pair of eyes and challenges its viewers to evaluate Richard for themselves. King Richard embodies its characters in an irresistible way and leaves viewers laughing and enlightened. Now available in theaters and on HBO Max, King Richard is a necessary watch.