The awaited adaptation of ‘Tick, Tick… Boom!’ is a blast to watch 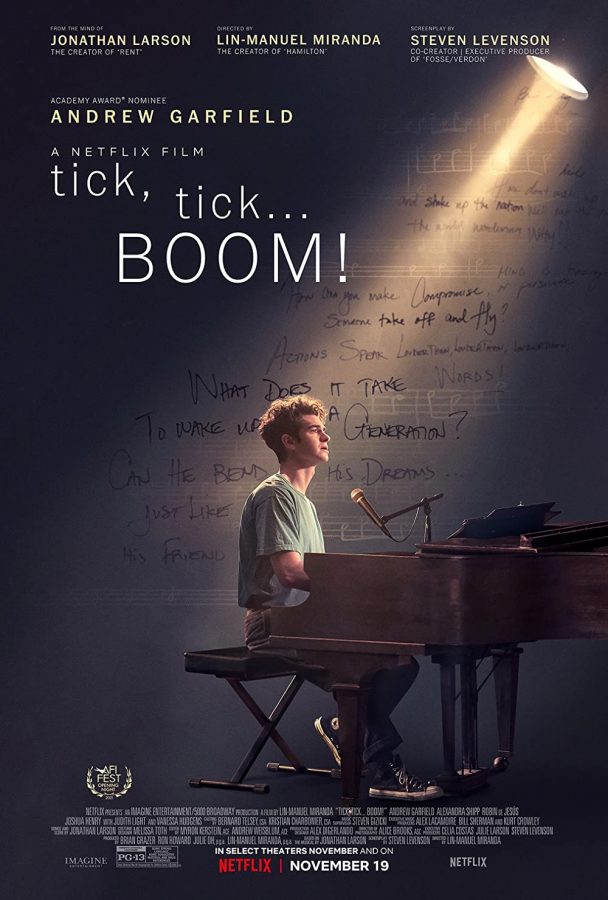 A piano sits in the corner of a nearly empty stage, as the audience patiently waits for Jonathan Larson to start playing. Soon, a melodic song fills the room, and the movie musical “Tick, Tick…Boom!” directed by Lin Manuel Miranda begins. The film is an adaptation of the 1990, semi-autobiographical, stage show by Jonathon Larson who later wrote the hit musical “Rent.” “Tick, Tick…Boom” follows a struggling artist in New York desperately trying to create a successful musical weeks before he faces his unavoidable worst nightmare: turning 30 years old.

Set in 1990, the ambitious playwright, Jonathan Larson, played by Andrew Garfield, is attempting to produce his passion project of eight years, a musical called “Superbia.” However, he is constantly facing rejection, as nobody on or off Broadway is willing to produce his work. Besides his unsuccessful creative pursuits, Larson is also struggling to maintain his relationship with his girlfriend Susan (Alexandra Shipp) and to pay his ever-growing bills. On top of his personal struggles, the looming AIDS crisis threatens the lives of his closest friends. All of these factors call one thing into question for Larson: what is he willing to sacrifice in order to become the next great musical theater playwright?

What stands out about “Tick, Tick…Boom!” is how visually stunning it is. Many of the musical numbers are not grounded in reality, as there are times where the sets fall apart or music notes float around the characters. This made the movie memorable, as I found it more entertaining to watch music numbers that were intricately shot rather than watching the actors traditionally sing towards the camera for every number.

Additionally, the bright, unique stylization of certain scenes provides a great contrast to the other scenes in the movie that are emphasized by the grey hues of New York City in the winter. The musical pieces are flamboyant which often lighten the mood of the movie’s sometimes depressing storyline. I found myself immersed in the creativity of each number, as the world seemed to transform when the characters began to sing.

Not only is the movie enjoyable to look at, but the actors also do an incredible job portraying their characters, each with their own unique ambitions, personality quirks and morals. Although none of the characters are perfect, they are relatable. Personally, I was drawn to Larson’s character who is shown as a workaholic, who consistently puts his work before his relationships and tends to prioritize himself and his needs in every situation. These flaws are what make him an engaging character to watch develop throughout the runtime. Furthermore, the actors’ chemistry with each other helped enhance the emotional stakes of the film. Since each character has intense relationships with one another, I could not help but be invested in their stories and hope that they all succeeded in their careers and personal lives. 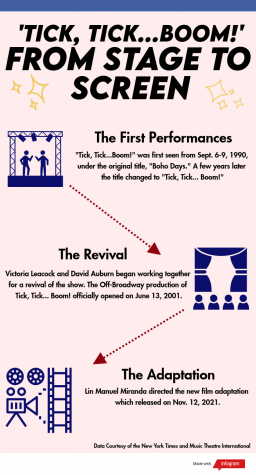 In addition to the stellar character work and cinematography, the movie occasionally breaks the fourth wall, which adds to its overall charm because it shows how self-aware the movie is of its original source material. Most of the movie’s scenes are shown chronologically, but there are times when the movie shifts towards a separate stage where Larson breaks the fourth wall and narrates to the audience what has happened in the movie so far. Remaining faithful to the original play, the stage he stands on resembles the real-life set that the first adaptation took place on. This touch was not only engaging to the viewer but also an incredible homage to the original stage show.

“Tick, Tick… Boom!” is a thrilling movie for anyone to watch, regardless of whether they are a fan of musicals or not. The entire cast has amazing chemistry with one another, and they come together to create a visually compelling, sentimental and sometimes tear-jerking film.