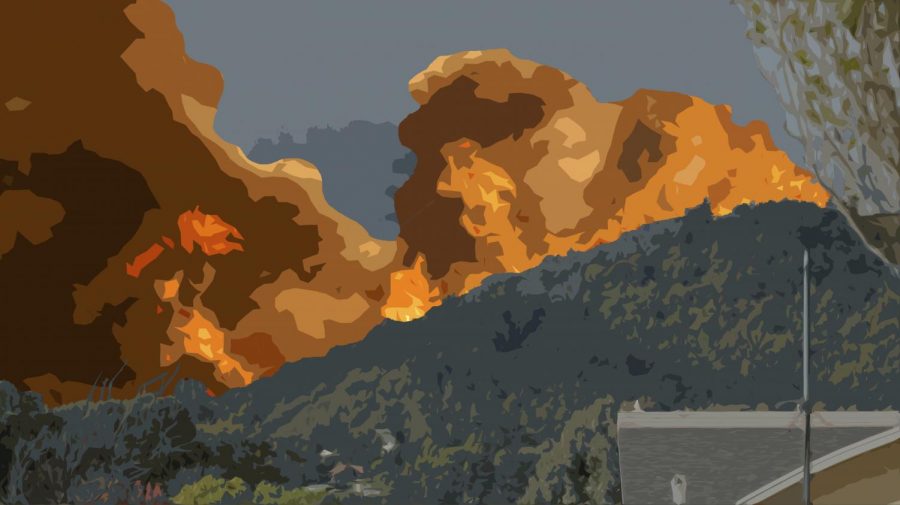 Students at Redwood High School and all around California are now accustomed to late summer and early fall days spent indoors as thick veils of smoke pass over the Bay Area. In recent years, fire season has brought the threat of wildfire close to home, with fires like the 2017 Tubbs Fire burning through cities near Marin, such as Santa Rosa and Sonoma. This past summer, fires reached as close as Terra Linda, burning the foothills surrounding Lucas Valley. Not long after, in late September, a fire sparked in Novato from a flipped car. Some Tamalpais Union High School District (TUHSD) students and faculty live within a few miles of these incidents and could be at risk of having to evacuate their homes due to both natural events and human errors. The various fire departments around Marin County are preparing to try and combat fires and prevent the possibility of another serious fire from ranging south from the North Bay into Marin.

Although many are alarmed by the fires, Marin residents are not completely helpless. Fire departments are not the only ones who can prepare for these incidents; mitigation can come from the work the public puts in to prepare as well.

Todd Lando, the Hazard Mitigation Specialist at the Central Marin Fire Department in Corte Madera, has worked at the station for 31 years and emphasizes the importance of residents protecting their homes.

“Right now, it is important that people clear the areas [of vegetation] around their homes and try to keep that distance that could stop the fire from jumping around. We need to create that defensible space. In fact, it is required by homeowners,” Lando said.

Small shrubs and dry grass around houses are most susceptible to catching fire during the hot, dry autumn days and these also happen to be what surround most peoples’ houses. Cutting away brush and flammable vegetation is the best way to start clearing space. Fire containment is extremely important, however, firefighters cannot trim every tree in Marin. It is paramount for the public to be involved with their community’s fire safety in a high-risk area such as Marin.

“We want trimmed and limbed trees that have no dead wood, trimmed grass with as little of that tall dry grass as possible and irrigated plants,” Lando said.

California’s drought makes the issue of fighting fires a balancing act. Senior Jake Ures is a volunteer intern at fire departments around Marin and is learning about fire science. Through his internship, Ures has come to learn that in our community, using too much water can be just as dangerous as not using any water when it comes to combating fire season.

“A lot of students have very nice lawns at home that require a lot of maintenance and water. It is important that you don’t overwater it and we conserve water for the fires as well. If a fire were to start nearby, the fire department uses a lot of water from reservoirs and nearby pumps,” Ures said.

The availability of water is vital; when firefighters have no water, they cannot properly contain the fires.

“It changes everything about how we fight fires. The less water there is, the drier the vegetation is, and [this] makes [fires] burn hotter and more intensely. This takes more water, but where we are, they have less water, so it makes it kind of paradoxical,” Lando said. “We recommend plants that do not need as much water, and sometimes, to cut back on our plants.”

Properly maintained yards, patios, greenhouses and gardens make homes much safer during the fire season. Improperly cared for, these factors can turn one’s backyard into a hotspot for wildfire. These recommendations along with a full list of steps that homeowners and renters can take are also available on the Marin fire departments’ websites. It is important that people are clearing their own properties as well as public land that puts a community at risk during the fire season.

“Even when you see dry brush on the side of the road, it could really make a difference if it gets cleared,” Ures said.

According to a 2007 study from the Pacific Biodiversity Institute, 60.7 percent of all human-caused fires within the U.S. happen within 200 meters of a road. Whether it be cars or debris, the risk of fire is more prevalent near roadways.

Unfortunately, fires are not always contained as we have seen in years past around the Bay. It is very feasible that a fire coming from the North Bay would result in an evacuation of Marin County. Immediate priority goes to getting all civilians away from the danger so firefighters can do their job. The evacuation process is swift and residents should stay prepared.

“You wouldn’t have much time to bring your things. Just bring what you know you will need [and] don’t prioritize your personal belongings over your life. Getting out can take longer than people think,” Ures said.

Evacuees need to move quickly and take only what they need. In the scenario of a fire, money is one of the most valuable resources, along with supplies commonly found in go-kits.

“We recommend that everyone has a go-kit, especially in the summertime. This should be a backpack or something easy to carry that has a protective layer of clothing, gloves, masks, goggles, head coverings and flashlights. I have seen people running out [of their homes] in flip flops which isn’t very safe,” Lando said.

Marin’s proximity to the San Francisco Bay allows easy access to multiple bridges, providing different areas for residents to evacuate to. However, San Francisco is far too densely populated to hold the entire population of an evacuated Marin County. As described in the Mt. Tam Mutual Threat Zone plan (MTZ Plan), Marin residents should expect evacuation centers to be located in the East Bay — likely accessible by only a few routes which could be blocked in emergencies. Evacuation routes are initially aimed at getting everyone to Highway 101 and then to an actual evacuation point which varies depending on the location of the fire.

“Within the next few years, you’re going to start seeing fires that cause dozens, hundreds or even thousands of evacuees to leave their homes,” Lando said. “Anything along the base of Mt. Tamalpais would cause evacuations. Mass evacuations are [demanded] based on what we dictate fire paths will look like.”

Todd Cliff is a former Santa Rosa resident who has evacuated his home four times in the last five years due to fires and ultimately moved to the South Bay Area to avoid the danger.

Residents in the North Bay have had every reason to prepare, and now that fires have passed through several times, most residents are well equipped.

“My first time, I got lucky. My house was fine and I grabbed God knows what with me when I left. After the first evacuation I started keeping a duffel bag in my garage that had a few shirts, a few pairs of pants and some protective gear like gardening gloves and safety glasses. Even my kids’ school had N95 masks available for the air years before the pandemic had us in masks,” Cliff said.

Although Central Marin has not had to evacuate for fires in two decades, the community needs to stay alert to the possibility.

“This community isn’t particularly in practice with evacuations, so we are going to be calling them much earlier,” Lando said. “The potential is there for a fire that causes all of the county to evacuate, and it seems to only look worse each year. In 2021 however, we saw weather more similar to what we consider normal.”

Last summer, the Weather Channel reported average temperatures in Marin up to 10 degrees Fahrenheit higher than 2021. Hopefully, the trend continues into the next year, but in the event of an emergency, evacuations are called over the radio via housing zones that get warnings one by one depending on the direction a fire is traveling. Evacuees should know which housing zone they are a part of and what routes to evacuate on.

“In 2017, before I sold my home, I was listening to the radio when they recommended my zone to evacuate or be prepared to. I knew to leave my work and immediately go home to grab some supplies before getting my kids and leaving. I never got service at my house, so the radio gave me a better heads up,” Cliff said.

Information for these scenarios can be located online, but during emergencies may not be accessible.

“It is important to listen to first responders. Tune into your radio, because you could lose cell service,” Ures said.

“If we see rain through the next few weeks [of late October], it would mean the end of the high-risk area of the fire season,” Lando said.

Thankfully, in the week of Oct. 18, Marin experienced the first consistent rainfall in months, alleviating some of the uncertainty and danger.

Risks are settling in Marin and the Bay Area, but fires are a possibility all year round. Central Marin Fire recommends that people keep go-kits and similar supplies as early as the start of spring, if not all year.

“Just one week of rain is not going to cut it. Just because we have good and healthy vegetation doesn’t stop someone from dropping a cigarette or having a gender reveal party,” Ures said.

This “gender reveal party” was what caused the El Dorado fire that burned 20,000 acres from Sept. 5 to Nov. 16, 2020. A couple used minor pyrotechnics to reveal their baby’s gender, which caught a nearby hillside on fire. Not only should residents stay diligent about mitigating the fuel for forest fires, but their actions in dry areas. It does not take much for a small flame to get picked up by the wind and spread rapidly.

“The vast majority of fires are due to human error,” Ures said.

According to the National Park Services, 85 percent of all fires in the U.S. are caused directly by humans, proving we could all be more careful, especially once the spring season rolls around. Until then, residents are advised to follow protocols mentioned above such as clearing defensible space, conserving water while keeping their gardens healthy and making sure that all precautions are taken when lighting a fire.