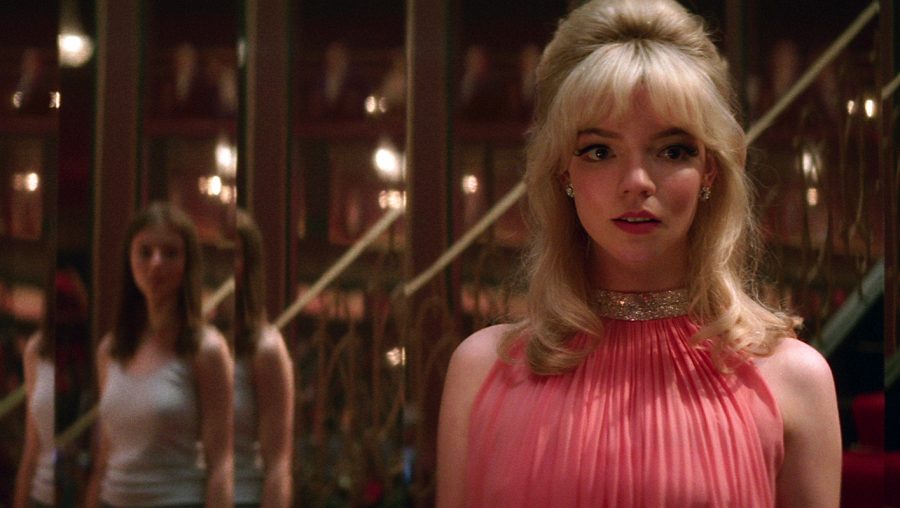 Pink chiffon flashes across the dance floor. Blazing lights advertise Sean Connery’s 1968 James Bond film “Thunderball.” The Walker Brothers’ song “Land of 1000 Dances” haunts the gauzy 60s backdrop of “Last Night In Soho,” the newest movie by director Edgar Wright. The film balances both present-day and 1968 London by following a young fashion student, Eloise (Thomasin Mackenzie), who experiences lucid visions of the past that begin affecting her everyday life. Eloise begins seeing 1960s London through the eyes of Sandie (Anya Taylor-Joy), an aspiring singer struggling to gain recognition in her career, but these visions soon become horrific as the line between Eloise’s reality and fantasies becomes blurred.

“Last Night In Soho” is a visually stunning film, largely because of the efforts of cinematographer Chung-Hoon Chung, whose other credits include the upcoming series “Obi-Wan Kenobi” as well as the 2016 adaptation of “Me and Earl and the Dying Girl.”

The movie clearly draws inspiration from several classic thrillers and 60s dramas, such as  “Suspiria” and “Darling” through similarities in red and blue lighting, plot and period costumes. Even Eloise’s growing fear of going to sleep, since this is when she is frequently transported back to the 60s, feels reminiscent of the storyline in Wes Craven’s “Nightmare on Elm Street” (1984). At times, however, the visuals become overwhelming and over-the-top, especially due to an overreliance on special effects in the more dream-like sequences of the film.. These take away from the feeling of authenticity the movie could have had with such strong source material and the original horror films it takes so much of its story from.

Another strong point is the costuming and soundtrack. Of course, the film is centered on a fashion design student. From Anya Taylor-Joy’s pink tent dress and mod-style outfits, to Thomasin Mackenzie’s retro white jacket and dresses, stunning imagery is present throughout the movie. The soundtrack is also exceptional, with classics like Dusty Springfield’s “Wishin’ and Hopin’” and The Kinks’ “Starstruck” adding to the 1960s ambiance. The combination of visuals, clothing and the soundtrack mesh together almost seamlessly.

However, the power held by the visuals, costuming and music cannot make up for the lack of substance underneath the movie’s surface. The scenes that are set in the modern day, especially, fall flat and feel almost unneeded compared to the fast-moving world created to emulate the 1960s. Present-day London and Eloise’s daily life feel almost like an afterthought. The movie only picks up its pace in the second half, when visions of the 1960s begin to come into Eloise’s reality. The dialogue feels contrived in many of the scenes, with side characters given next to no opportunity to develop relegated one-liners that don’t add much to the story. Mackenzie and Taylor-Joy both do amazing work with the material they have been given, embodying their characters perfectly, but the actors alone cannot fix the script’s gaps and shortcomings. Side characters like Jack (Matt Smith), Sandie’s controlling boyfriend and manager, also do an excellent job of giving his own unique spin on the script and establishing the movie’s individuality despite drawing many elements from movies that already exist.

The film ultimately fails to truly leave an impactful message, skewed by an over-the-top ending sequence and an ending scene that feels like a cheap and unnecessary conclusion. What makes “Last Night in Soho” enjoyable is its attention to detail in crafting scenes and stylized visuals. What prevents it from being truly great is when the effects and more fantastical elements draw attention away from the promising potential of the film’s storyline. Watch the movie’s trailer here.