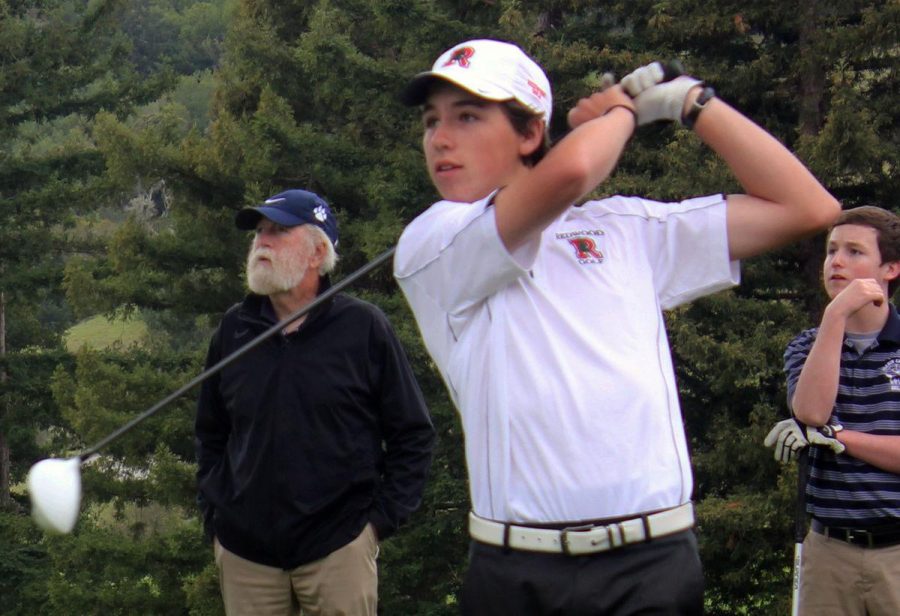 Jon Shaw could not believe it. A triple bogey. Tenth hole of the MCAL championship at San Geronimo, and he had shot a triple bogey. Three minutes was all he allowed himself to be angry. Then he moved on.

Using his strong short game and solid putting to birdie several of the remaining eight holes, he produced a score of 72.

The number itself was not especially inspiring to Shaw. A 72 is good, but Shaw is an elite MCAL player. Were his home course not the score-raising Meadow Club, Shaw perhaps would be Player of the Year, which is decided purely on average score.

On April 29, 72 was not purely an average score. The greens were inconsistent, the weather challenging. So Shaw carried the day, besting every other golfer by two strokes. His teammate, junior Chris Laub, was close behind, coming in with a score of 76. Together, Redwood’s two stars placed the team firmly in the lead.

The lead would hold for the rest of the day, giving Redwood its third straight MCAL championship.

Shaw and Laub had to carry the rest of the team, who scored in the upper 80s and low 90s, to the MCAL championship victory.

But throughout the year the team has relied on excellent performances from various members. In the team’s second match against Branson, Shaw shot a 41 (in regular matches, the golfers play just nine holes), three or four shots more than he would usually register. But Gotz saved the day with a score of 36 to push the team to the victory.

The fourth, fifth, and sixth players are also key. One score out of the six is dropped each match, so two out of the bottom three players must turn in solid scores. Redwood’s bottom three is certainly capable of doing so. Freshman Nick Laub takes after his brother Chris, excelling at driving the ball. Sophomore Matt Cinelli and senior Matt Beaumont have improved throughout the year, helping to boost the team during its 11 match regular-season win streak.

Chris Laub is one of the best ball-strikers in MCAL, driving the ball up to 290 yards. Shaw’s short game is unmatched in the league, while his putting is close behind. Junior Alex Gotz has emerged as a solid third player, capable of shooting low scores to cover on off-days by Shaw or Laub.

However, a slow-paced individual sport like golf requires more than talent – the mental aspect plays an important role. After that triple bogey, Shaw could have easily bogged himself down with frustration and slumped his way through the rest of the course. But he’s been trained not to, as has every other golfer on the team.

Coach Ben Kline is a psychologist who focuses heavily on the mental aspect of the sport. Junior Alex Gotz attributed much of the team’s success to Kline’s emphasis on the proper mindset.

At team dinners hosted by various members of the team, Kline invites guests who speak about how to approach the game mentally.

Gotz said he was most helped by a presentation from Eric Jones, who preached about the topic of target awareness – in essence, focusing the mind on the target and simply letting the body do the work.

While Kline does not work with the boys much on golf mechanics, assistant coaches do. Justin Riegler and Dave Wolert, a PGA professional, talk to the players consistently about maintaining swing plane and staying balanced.

Most of the mechanical work for the golfers comes with private coaches, according to Laub, because they provide instruction for the athletes during the offseason. But Laub still said the Redwood coaches were instrumental during the season, providing feedback to players in conjunction with the training received from private coaches.

“Our team coaches will not really mess with what we’re working on,” Laub said. “But if I might say to one of the coaches, ‘Hey, can you check for this?’ and he’ll say, ‘Yeah, this is correct or incorrect based on what you’re working on.’ So in terms of what you want them to look at, they’re perfect because it’s another pair of eyes.”

The team finished 10th out of 25 teams at the NCS match.