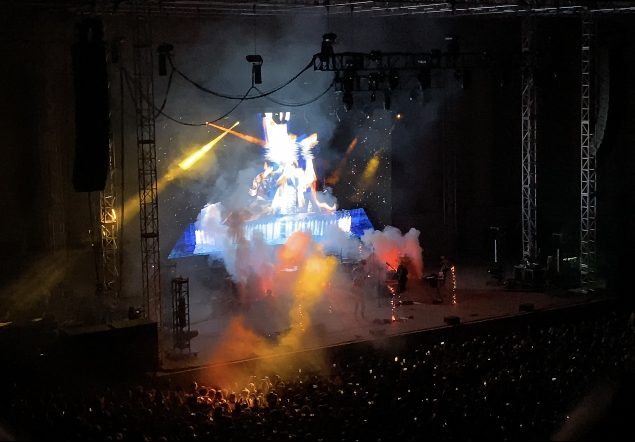 Phoebe Bridgers blew fans away at her recent concert in Berkeley, enveloping her audience with her soothing voice and creating an ideal atmosphere for a night of chill, quality music. Bridgers, on her nation-wide “Reunion Tour,” performed her latest critically acclaimed indie album, “Punisher.” Many connected with her unconventional and romantic lyricism, as it allowed them to understand her on a personal level. Nearing the end of her first tour, fans have heard and marveled at her whimsical melodies finally being performed live.

Played at The Greek Theatre, the show’s opening act unfolded around 8:00 p.m. and was performed by a friend of Bridgers,

Julien Baker. Baker and Bridgers released an Extended Play together in2018, “boygenius,” and fans were thrilled to hear a few songs they recognized. As the opening act concluded, fans were at the edge of their seats with anticipation. However, 30 minutes later, fans were still waiting, and many left to buy food at the stands. I found myself checking my phone every five minutes, growing impatient at the sight of the vacant stage. Finally, after around 45 minutes, lights illuminated the stage and a blanket of suspense quieted down the jittering fans. The show was about to begin.

As the first few chords of her most popular song, “Motion Sickness”, rang out, fans erupted into screams and colored strobe lighting began to flash. Bridgers sported an all-black suit and sang with an upbeat tone, keeping the environment cheerful and lighthearted for the beginning of the show.

During the concert, projections displayed cartoon-like images behind Bridgers and the band on stage, each representing a certain lyric or song. The orange and brown spot lights that slowly drifted around the crowds were magical, reminding me of Halloween and peaceful fall evenings. Songs like “Funeral” sent the crowd into a cozy daze despite the cold night’s air.

“Funeral” is a melancholy ballad about self-pity and narcissism. It was also one of the few songs performed from Bridgers’s first album,“Stranger in the Alps,” released in 2017. Being able to hear it performed live brought a wave of nostalgia over me, and I wished I could have heard more songs from“Stranger in the Alps.”

Bridgers’s lack of songs from this album left myself and many others a little dissatisfied by her less popular but still beautiful songs being left unsung. Her fanbase is arguably one of the most tight-knit and dedicated ones. Not only does it become easier to become attached and form connections with her tracks, but also with other fans who appreciate the same type of very specific music she creates.

Towards the end of her show, Bridgers captured the heart of every audience member with one of her final songs, “I Know The End.” The bridge of the song felt like slowly going up a rollercoaster, as fans sang louder and louder and eventually broke into screams as the set closed.

Bridgers’s show beautifully showcased her personality and performance abilities. The smoke, lighting and projections behind the band allowed fans to understand the emotion that was  attached to each song. Despite wanting to hear more from her other album, Bridgers sang songs from “Punisher” in a way that filled the whole venue with overwhelming emotion. She closed her show by singing a cover of  “That Funny Feeling” by Bo Burnham in her trademark solemn tone. Walking back to the car, I felt content after listening to the good live music already beginning to replay in my head.