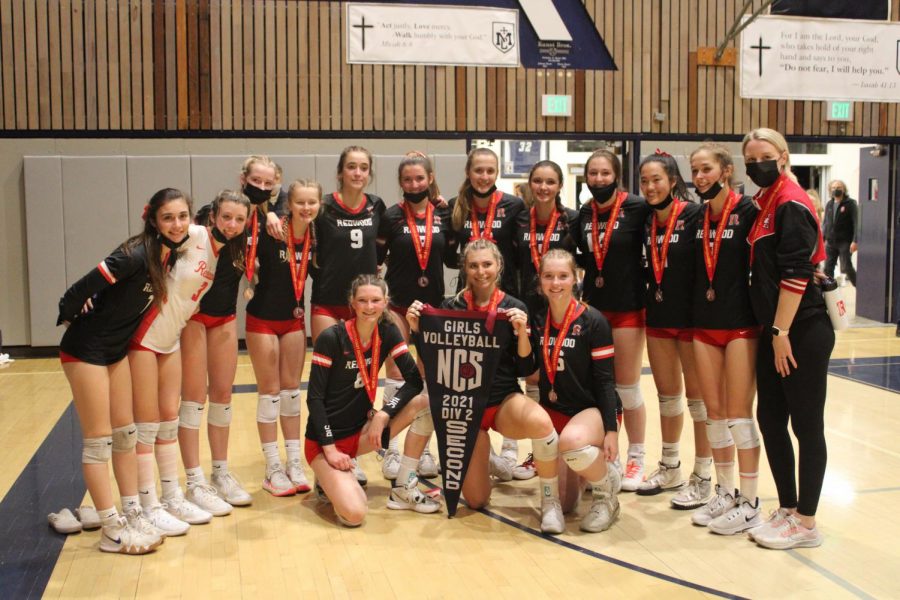 The varsity girls’ volleyball team could hardly contain their excitement to play against their longtime rivals, Marin Catholic High School (MC). Sustained throughout their highschool and club team careers, this friendly feud has intensified the gameplay between Redwood and MC players. The North Coast Section (NCS) championship game on Nov. 6 was characterized by long rallies and fierce energy. When faced with another opportunity to gain redemption after losing on Sept. 22, the Redwood girls’ team lost in a close game to MC in all three sets. The sets concluded at 20-25, 18-25 and 19-25, with brief moments of tied scores. Junior Katelyn McKnew understood why the game was more competitive compared to their previous loss against MC.

“Before each set, we came out with a lot of energy,” McKnew said. “I think resetting after a little loss between the sets [is what] my team is really good at. Sometimes we try to get too tricky with the [technique] and it doesn’t quite work.”

Stepping onto the court with more than a month of practice since their previous game against the MC team, the girls felt more mentally and physically prepared. With two of their starters sitting out of the previous MC game due to injuries, the team’s chemistry was noticeably more present this time around. Freshman Ella Moran noted their fiery entrance.

“I thought we came out way stronger and started off talking more,” Moran said.

From her perspective as libero, Moran noticed MC’s strong defense. She commended her team’s attack and especially praised junior Kaley Matthews for her strategic decision making as the starting setter.

“We were trying to run the middle [hitters] a lot more because last time when we played them we didn’t run it as much. But I thought the middle did a great job, and Kaley did a great job of running the court and setting everyone,” Moran said.

Redwood head coach Ursula Gruenert said the girls held their own, and that the loss boiled down to an arms-race of who consistently performed better.

“The hard thing is we need to be able to pass in order to run our middle [hitter.] We passed well, but not well enough where we could involve our middle [hitter] more. It was a step up. Everything that we did from the last time we played them was an improvement,” Gruenert said.

As a third year varsity player, McKnew had high hopes to win. Despite the loss, she gained some insight from playing as the middle blocker.

“I learned from that game that I really need to close the block especially on those big outside [hitters.] Hopefully we’ll be watching a lot of film and going over it and [trying to adjust the game plan for next time,” McKnew said.

In addition to McKnew, Gruenert claims that everyone benefited from the lessons they learned despite the final score.

“It’s easy to start a game fired up, lose a couple [of] points and then kind of tailspin,” Gruenert said. “We tried to keep a high level of consistent energy, but it’s hard [and] exhausting. It’s frustrating, especially when they compete at a high level to continuously just barely lose to a team, but I believe [in] every experience they have they’re learning.”

Redwood may face MC again if they continue winning the California Interscholastic Federation (CIF) games. Redwood will play their first CIF game on Nov. 9 against Pleasant Valley at their home court.