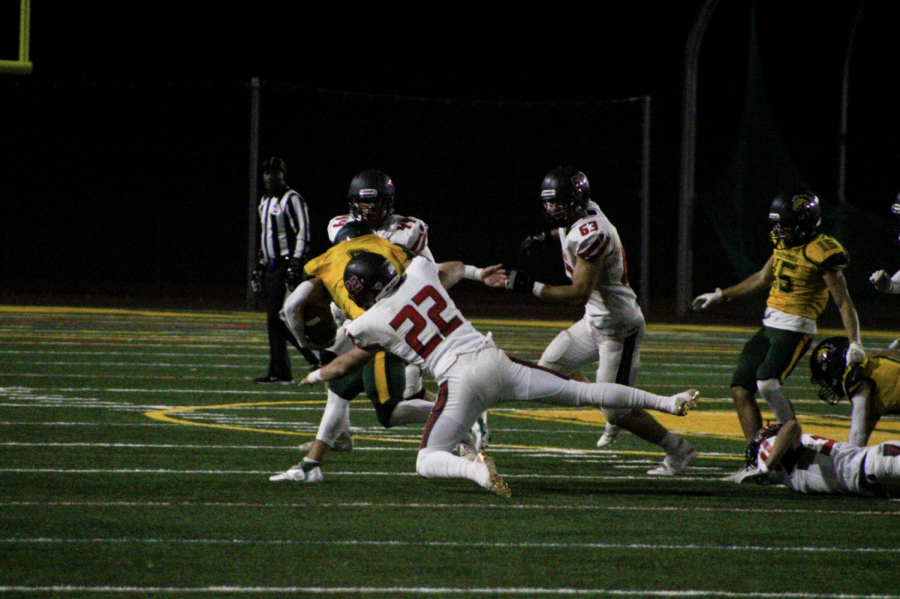 When the clock hit zero at the end of Redwood’s faceoff against San Marin last Friday, Nov. 5, nobody knew what was next for the team. Their record put them on the brink of contention for a playoff spot, but seedings would not be released until today, Nov. 7. What the team knew for sure was that they battled until the very last snap and played a game of fierce, competitive football. Despite the 46 to 27 loss, players and coaches alike were proud of their performance. Head coach Allen Talley was impressed with his team’s effort, and knew they put up a good fight.

“It was a good game. We were really inconsistent, but the kids fought, and that’s what we always wanted. So I was really proud of them for that. Really proud,” Talley said.

The first quarter of the game was scoreless and consisted of mostly short offensive drives ending in punts by both teams. Junior tight end and defensive end Rowe Stodolnic attributed the team’s defensive success in the first quarter to their ability to shut down San Marin’s long pass attempts and handoffs to their star running back, Justin Guin.

“That was the best I’ve ever seen our defense play. The first two drives were four and done; we just held those guys. Number six, Guin — we were preparing for him all week. We showed him that we were ready,” Stodolnic said.

Despite this, San Marin came into the second quarter strong and scored two touchdowns within the first two minutes. The first was the result of a deep pass by San Marin quarterback Joey Cook, as Redwood only had one man covering the receiver who could not catch up. A missed extra point followed the play.

On Redwood’s next offensive drive, San Marin’s tough defense forced a fumble that they were able to recover for a swift 46-yard scoop-and-score. The score was then followed by a successful two-point conversion. This marked an emotional turning point for Redwood, and players began to lose stamina.

“They scored twice in a minute, and that was kind of like a punch in the face. We were playing so well on defense, and then they blindsided us with the two scores,” Stodolnic said. “Fourteen points in one minute, looking at the scoreboard, it’s a little disheartening. We did come back from it, but it just took a little longer than it should have.”

After an ineffective drive on offense for Redwood, Guin rushed into the endzone for another San Marin touchdown, leaving the score at 20 to 0 after San Marin missed their extra point attempt.

With five minutes left in the quarter, Redwood quarterback junior Brady Weingart threw deep to senior wide receiver Nico Tribuzio, giving Redwood a first down within the 15-yard line. Two plays later, Weingart fired a lateral pass to wide receiver Zack Johnson, who carried the ball into the endzone to put Redwood on the board. Johnson felt that the team’s energy had been rekindled after the touchdown, giving them hope for a recovery.

“I was the most excited I’ve been in a long time. I knew that [touchdown had] given us a chance we needed to come back. If we didn’t get it, we would have been in a hell of a lot more trouble,” Johnson said.

San Marin quickly charged back down the field, putting the ball in the end zone on a 40-yard reception with 37 seconds left in the half, leaving the score 26 to 7 at halftime.

On Redwood’s first offensive drive of the second half, Weingart threw an interception, leading to another touchdown for San Marin. After that, Redwood’s defense began to successfully hold off San Marin and kept the score stagnant for a large majority of the third quarter. Redwood held their ground against San Marin’s running game, and Johnson explained that despite Guin’s many attempts, he could not break through their defensive line.

“We tightened down our ends. We were just trying to stack the box as much as possible and eliminate his cutback lanes because that’s what he likes to do. He’s just hard to bring down; he’s a pretty thick kid,” Johnson said.

Towards the end of the third quarter, Weingart threw a deep arching pass down the field, which bounced off junior Colin McGrath before landing in senior wide receiver Luca Veconi’s outstretched arms. This put Redwood in scoring territory, and the team finished the offensive drive with a one-yard rushing touchdown by senior running back Yur Majesty Starbird.

The fourth quarter consisted of two more touchdowns by each team. San Marin was the first to score with a 44-yard run, followed by a quick Redwood offensive drive and a touchdown pass to junior Sam Janowsky.

Junior kicker Conor Weasler placed his post-touchdown kick perfectly on the first-yard line, and Redwood shut down San Marin’s return attempt. On San Marin’s next offensive drive, Redwood’s defense recovered a fumble, and the offense capitalized with an 11-yard receiving touchdown by Stodolnic. The following extra point was blocked by San Marin, leaving the score 27 to 39. San Marin scored the last touchdown, capping off their win with a 7-yard run by Guin.

After the game, a mix of emotions overcame Redwood’s players. While they were disappointed with the loss, they were more saddened by the idea that they may never have a chance to play with the same group again.

“We worked so well together, and all these kids love each other. I just haven’t been part of a team like this. So at the end of the game, I was like, ‘The game’s over, we lost, but I’m not as concerned about the game as I [am] about losing the team,’” Stodolnic said.

Senior players were not immune to these intense emotions, as it was the last time they would set foot on the field in grey and white.

“I’m honestly just kind of sad. I don’t know if this is the last time I get to wear my pads and get to play football,” Johnson said. “[It might be] my last time in Redwood pads, I don’t know. We will know Sunday. It’s this jersey. It’s this team; I don’t wanna be done with it yet.”

It has since been released that Redwood did not take a spot in the playoffs this season. The team finished with an overall winning record, consisting of six wins and four losses.