Missing women in media: The white take the spotlight 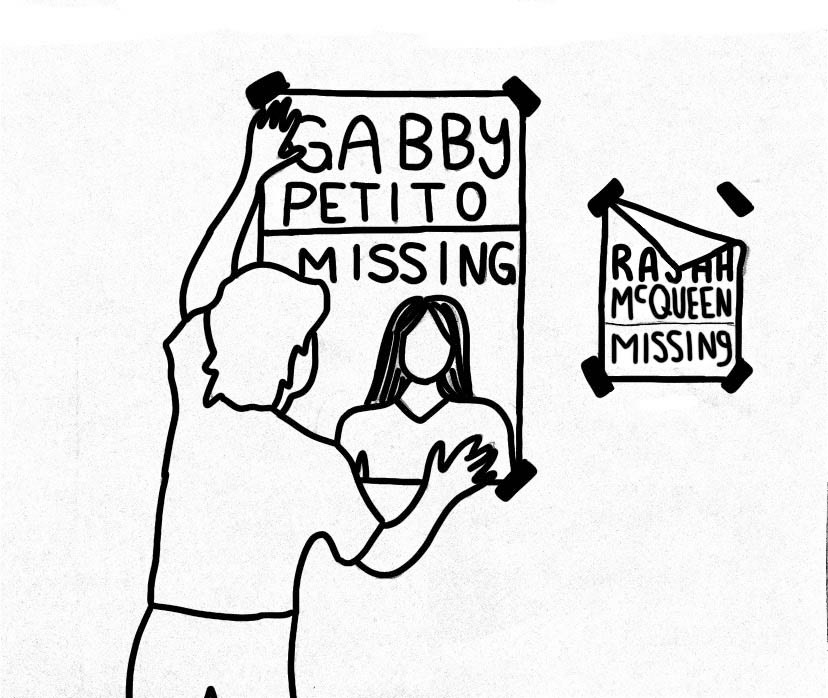 On Sept. 11, 2021, Gabby Petito, a 22-year-old white woman from Florida, went missing. Nationwide, the disappearance of Gabby Petito has become a popular subject. While it is important that Petito’s case is covered and that we recognize her disappearance, it is also necessary that we take this case and reflect on its coverage in comparison to the hundreds of women of color who go missing every year. According to a 2013 study in the Journal of Criminal Law and Criminology, white women make up about one-third of the national population, but make up one-half of the news articles written by the Star Tribune, the Chicago Tribune, CNN and the Atlanta-Journal Constitution. The public is more aware of white women who have gone missing, been abducted or murdered, than we are of women of color who go through these same devastations. Women of color are entitled to the same attention and coverage as white women because their lives are just as important. However, this is not reflected in the media.

Gabby Petito, Patty Hearst, Jayme Closs and Elizabeth Smart are all white women who have gone missing and, as a result, made national news. Chances are you’ve heard these women’s names in your homes or on the street, but have you heard of Rajah McQueen, a 27-year-old Black woman who was last seen on June 26, 2021 in Cleveland, Ohio? She has received very little news coverage and thus has attained nowhere near the amount of attention Petito has received. To compare, #rajahmcqueen on TikTok has only 5148 views, while #gabbypetito has 1.4 billion views. Not only are both of these cases about women in their twenties, but both women are also suspected to have been in abusive relationships at the time of their disappearances. Despite their similarities, Petito’s case gained the attention of millions more people.

Many might argue that the reason Petito’s case gained so much coverage was because of her social media presence and her “influencer” status. Petito frequently posted on Instagram and had recently started a YouTube channel, but this is no justification for her case attracting more attention than that of missing women of color. Although Petito had social media influence, the same can not be said of several other white women such as Sarah Everard, Patty Hearst and Elizabeth Smart who have gone missing and gained national attention. This shows that it is not these womens social media influence that makes them get national attention. It’s their race.

In order for more missing women of color to get the attention they deserve, media companies need to start speaking up about the lives of women of color. According to a January 2021 report published by Wyoming’s Missing and Murdered Indigenous Peoples Task Force, 21 percent of homicide victims in Wyoming between 2000 and 2020 were Indigenous peoples, yet only 18 percent of Indigenous female victims received coverage. In contrast, 51 percent of white victims made the news. Additionally, according to the National Crime Information Center, 268,884 women and girls were reported missing in the U.S. in 2020. Of this, 34 percent were Black females. Clearly, hundreds of women of color go missing every year, but most people are incapable of naming a single one of them. According to an October Bark survey, 55 percent of Redwood students have never even heard of any specific women of color who have gone missing. The media’s lack of coverage of women of color suggests that they prioritize the lives of white women.

Although we must address the fact that news publications do not pay enough attention to women of color who go missing, we also need to reflect on how the general public plays a role in only placing value in white women’s lives. According to the LA Times, Gina Masullo, Associate Professor of Journalism and Media at the University of Texas at Austin, stated that, “The same reason why media coverage is different for white women than for women of color is the same reason this is getting so much attention … We live in a system that puts white women at a higher value.”

Because we, as a society, are so quick to digest the stories of white women who go missing and are so eager to try to solve their cases or bring awareness to them, the media continues to share these women’s stories due to their reception. If we could give the same attention to cases such as Rajah McQueen’s, what we see on the news and on social media would consequently change. It is not only the fault of the media for disproportionately highlighting missing white women, but it is also the public’s fault for continuing to solely focus on cases of white women.

Many women of color are left feeling unimportant and unvalued in comparison to white women due to the lack of acknowledgement women of color get when they go missing. Therefore, it is necessary that society comes together to reflect on our historic and current racist biases so we can move forward and begin to give women of color the same attention and value they deserve.