Solomon Fragakis has an eye for the action 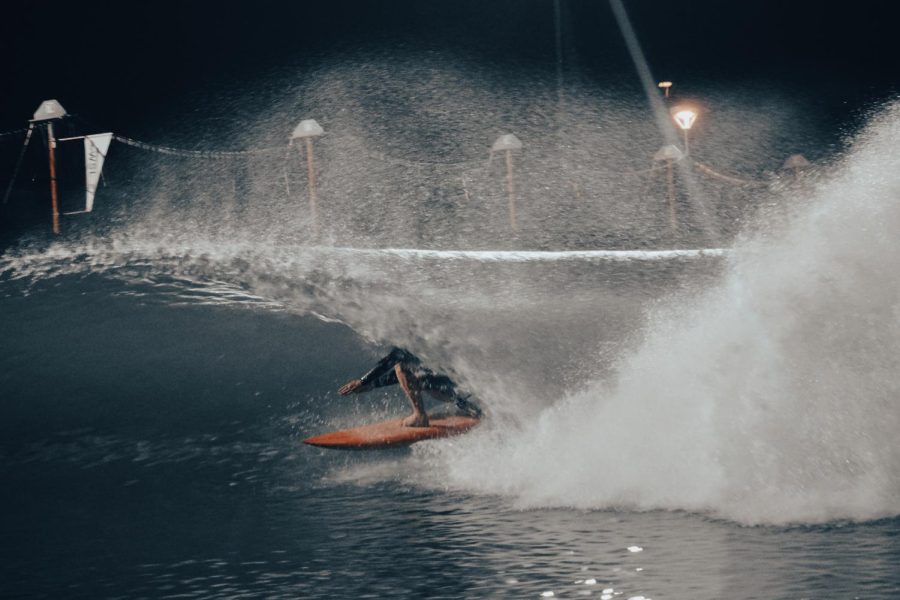 Awake before the sunrise, Solomon Fragakis, a current junior at Tamiscal and former Redwood student, loads his car with his morning necessities: a surfboard, wetsuit, wax, camera bag, camera body, lens, an extra lens and one more lens with a really good zoom. He gets to the beach, suits up and shreds. Fragakis often surfs with company, joined by other early morning adventurers. Halfway through, he runs back to his car to grab his camera. Returning to the ocean soon after, Fragakis returns with a different intention, rather than to shred, he aims to shoot video. He films his friends showing off their skills, capturing everything from break to barrel. Packing up his equipment and getting on the road, he hopes to make it back in time for his first class.

Fragakis is an adventure sport enthusiast, whether it’s surfing, snowboarding or mountain biking, he lives for the thrill. Fragakis also lives for film. Blending the two, he cinematically captures the action.

It hasn’t always been that way, though. For most of his life, Fragakis has been the one in front of the camera doing these sports. It wasn’t until last February, when snowboarding in the half-pipe at Mammoth Mountain that his role changed. Fragakis fell and dislocated his shoulder.

“​​I was out for six weeks, and I didn’t really know what to do with my life. I decided to pick my camera back up and try to make something,” Fragakis said.

The injury sparked his inspiration to create videos; with more free time, Fragakis began filming his friends and capturing their pursuit in sport. Finding surfers, mountain bikers and rock climbers, Fragakis filmed a range of adventures. Two months later, he found himself with over 300 gigabytes of footage.

“I found that I could actually make a 20-minute movie with the stuff I had filmed,” Fragakis said.

Over the next three months, he did exactly that. By July, the 16-year-old made his debut and released his movie, “What We’re Chasing.” Featuring six local athletes, the movie tells a story of the feeling of freedom that these talented individuals chase in Marin.

Noah Sargent, a local surfer, was featured in the film during the first segment. Working closely with Fragakis during the filming process, Sargent witnessed his talent.

“When Solomon first showed me the edit I was speechless, fully speechless. I had no expectations, so when he threw it all together, it was pretty shocking to see what he had created in such little time,” Sargent said.

Fragakis had a unique drive and focus to reach a professional standard. Most nights he worked tirelessly from 6 p.m. to 1 a.m. in order to perfect every detail. Owen Wright, a close friend and fellow surfer also featured in “What We’re Chasing,” saw how committed Fragakis was to perfecting the movie.

“When he was filming his movie, I remember he was just on a non-stop grind of editing and filming. I would ask him if he was tryna go surf but he’d be like ‘nah I have to edit’,” Wright said.

Fragakis was deliberate with the shots he chose because he strived for a seamless and engaging product. Inspired by action sports films that he grew up watching, Fragakis wanted to mesmerize his audience in the same way.

“Since I was young, I’ve always idolized these skiing, snowboarding and biking movies. I would rewatch them over, and over again, just unable to take my eyes off of them. I wanted to make something like that but mix all the sports together rather than sticking to one genre,” Fragakis said.

Setting out on the feat to make a movie, Fragakis did not know what he would face. He encountered computer crashes and loss of footage, but he did not give up.

“I can tell he’s very persistent in gaining a level of excellence in his work. He keeps working until he gets exactly what he wants,” Wright said.

After releasing “What We’re Chasing”, Fragakis’ connections multiplied. The movie acted as a doorway into more filming opportunities as clients were able to see what he was capable of and trust his talent. Fragakis sometimes encountered judgments about his potential, but he was able to disprove them.

“Definitely because I’m younger, people don’t really think I can do that much. No one realizes what’s going on while I’m filming but then they’re really impressed when they see what I can create,” Fragakis said.

For Fragakis, this is only the beginning. Bigger film projects are on the horizon and the filmmaker will continue searching for opportunities to record the adventure.

“I think everyone wants to better themselves. And I think [Fragakis], especially with how he’s already improving, doesn’t want to stop. No one wants to just stop and reach their peak. He’s definitely determined,” Sargent said.