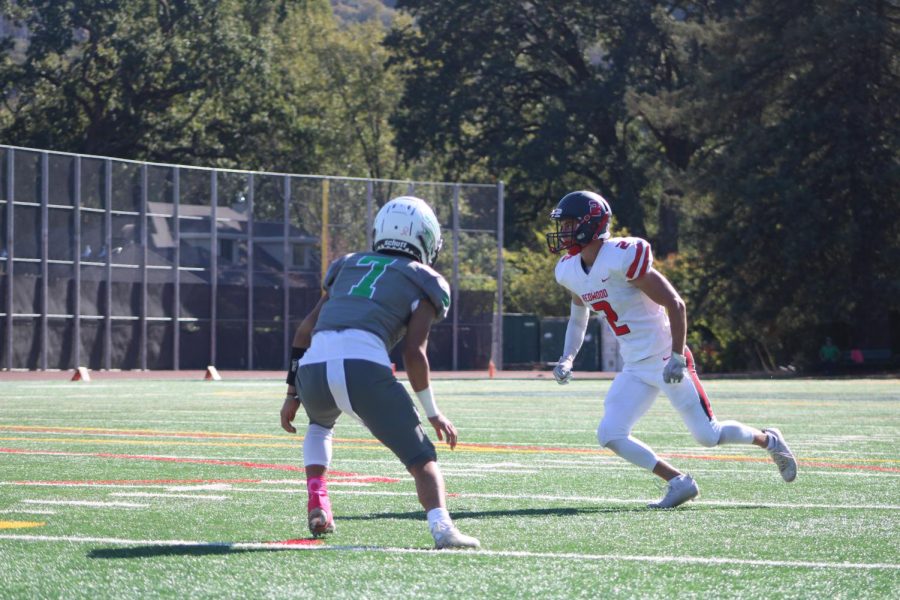 “My favorite thing is running as fast as I can and trying to make a play. I like the feeling [that] if I mess this up, it’s on me, but if I do this well, then I get to celebrate it. I like having that pressure,” senior Nico Tribuzio said.

This year, Tribuzio has been a standout player on Redwood’s varsity football team, excelling as a wide receiver and cornerback, totaling 21 receptions, 351 receiving yards, eight touchdowns, and upwards of 25 tackles. Redwood’s Sept. 25 faceoff against Novato High School marked one of his most impressive performances. Tribuzio had three receptions for 127 receiving yards and three touchdowns. Varsity quarterback Brady Weingart credits Tribuzio’s speed as one of the main factors in his success.

“My first impression [of Tribuzio was], ‘fast.’ You step on that field, [and] he is faster than everybody on it, every time,” Weingart said.

This speed has allowed Tribuzio to beautifully haul in a number of deep passes this year, and dodging defenders is a simple task when taking into account his elite shiftiness. During Redwood’s faceoff against Tamalpais High School (Tam), Tribuzio scored on an 89-yard kick return, bursting through Tam’s special teams unit on his way to the endzone.

In addition to speed, reliability is an asset that makes Tribuzio such a key component in both Redwood’s defense and offense. When catching passes from Weingart, his consistency comes into play and helps the team gain yards.

“[Tribuzio and I] have a really good relationship. We’ve got a lot of chemistry and I trust him. If he’s even slightly open, I just trust him to catch the ball,” Weingart said.

While a lot can be said about Tribuzios’s aptitude for the game, his leadership as a captain makes him a valuable resource for the team.

“He’s a lead by example kind of guy,” Weingart said. “He gets vocal when he gets fired up, but really he just leads by example. Every day he’s giving full effort in practice and everybody feeds off of his energy.”

Varsity head coach Allen Talley views Tribuzio’s leadership in a similar light and believes this silent maturity makes him a great example for the younger players.

“He’s hardworking, gets the job done and does whatever you need him to do,” Talley said. “He’s a leader. He’s kind of a quiet leader, but he’s a leader. Everybody looks up to him.”

The legacy of Tribuzio’s leadership is part of a bigger trend on the football team — upperclassmen always place a great deal of importance on mentoring and including younger players. For Tribuzio, it was varsity wide receiver and cornerback from the class of 2021, Zach Ginsburg, who left a remarkable impression. Tribuzio explained that during the seven on seven scrimmages the boys held during COVID-19, Ginsburg helped him in mastering many skills.

“I was getting destroyed by him. He would just catch every ball on me, and make good moves,” Tribuzio said. “I’d always ask how he did that, or [ask] for him to break down [moves] for me, and he would do it every time. He was super nice about helping me out and wanting me to get better. I still watch his highlights to see what he did, so I can try to model my game after some of those things.”

Undoubtedly, Tribuzio will leave a legacy similar to Ginsburg’s, a legacy that has been in the making since he set foot on the field freshman year, with his hard work, dedication and determination.