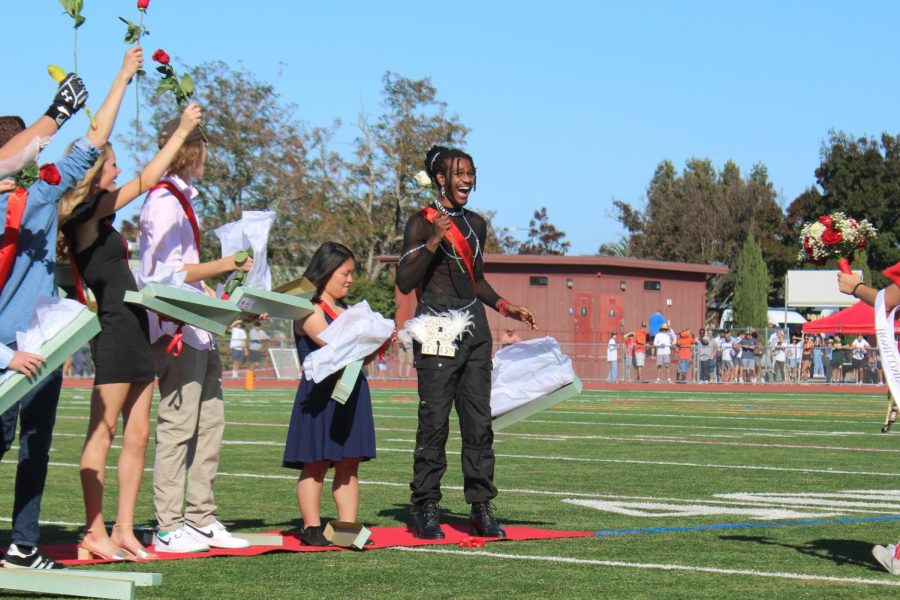 “[Growing up] I didn’t coincide with what everyone thought a man should look like. Then I realized, why do I have to be a model of what anyone expects?” senior Kaylen Shaw, this year’s Homecoming Royal, said.

This year the Leadership class changed the homecoming ceremony to only crown one Homecoming Royal. The senior class nominated twelve seniors and three were nominated by faculty, and the whole student body voted for the final Royal. They made this change to one final Royal in an effort to neutralize gendered terms of “king” and “queen” and include students of all gender identities.

Shaw made Redwood history by becoming the first openly non-binary student to win the title of Homecoming Royal on Oct. 16, 2021. For the Homecoming Royal reveal, all of the candidates lined up on the field at halftime during the homecoming football game, with their individual boxes hiding a rose inside. The winner’s rose was white while the others were red.

Senior Raine Conti was nominated to the homecoming court, as she is known for her participation and work in the Redwood theater program. A self-identified ally of the LGBTQ+ community, Conti was thrilled for Shaw to be crowned Homecoming Royal.

“I was so happy when [Shaw] opened the box [with the] white rose. I think the entire school [was thrilled] because it was not only exciting for the winner, it’s just so exciting to have that representation,” Conti said.

Leadership teacher Melissa Boles saw how Shaw’s role solidified their place as a leader in the Redwood community.

“When [Shaw] won, they seemed surprised. And my guess is that the surprise was also genuine that they did not realize how many people look up to them. They’ve definitely become a figurehead,” Boles said.

“I did think a lot about gender and gender roles historically, what masculinity looked like hundreds of years ago, and where that puts me as a person and my femininity. Then I just decided at one point that those things aren’t really tangible, femininity and masculinity; there’s not a real list to check off that makes you more feminine; what makes you more masculine? All of it is pretty much subjective,” Shaw said.

Will Fitzgerald, who has been close with Shaw since middle school, believes that Shaw’s win was well-deserved.

“I think that [Shaw deserved to win because they] have done a lot artistically and contributed to the social environment [at Redwood]. They always have this constant positive energy and ability to make everyone feel happier,” Fitzgerald said.

Fitzgerald also believes that their win brings up a bigger conversation about non-binary visibility at Redwood.

“I think that it [also] creates a space for correction and opportunity for people to start recognizing pronouns. For a lot of people that don’t have non-binary friends, they realize ‘oh, they use they/them pronouns,’” Fitzgerald said.

Conti also sees this as a positive reflection of Redwood’s values, and a step towards the school progressing even more with the LGBTQ+ community.

“This was a concrete example of a shift in the right direction,” Conti said. “I think it’s really great that the student body could band together and vote for somebody who just deserves it, especially somebody who identifies as non-binary. It is a progressive stance showing that ‘We [support this person.] That’s somebody that the entire school chose to represent Redwood for the whole year.’”