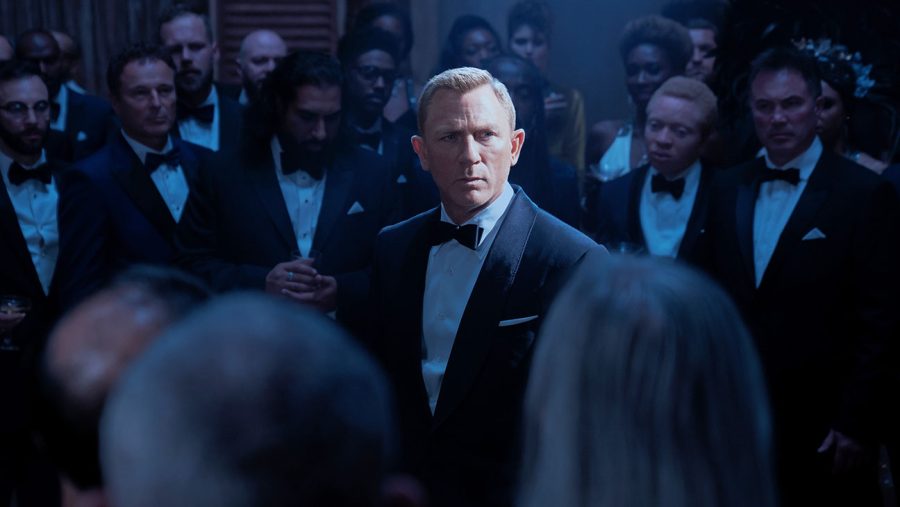 “No Time To Die,” the newest James Bond movie directed by Cary Joji Fukanaga, was released on Oct. 8, 2021, after being delayed for over a year due to COVID-19. Starring Daniel Craig, the film tells the story of James Bond: a former agent from MI6, the British intelligence agency. Bond meets a former friend Felix Leiter, played by Jeffery Wright, who warns him of a mission that requires the best 00 agent — Bond himself. Leaving his tranquil, retired life in Jamaica, Bond departs to help the CIA and MI6 rescue a kidnapped scientist, who turns out to be far more dangerous than expected. Bond and other 00 agents travel from Jamaica to the murky woods of the Netherlands to overcome a series of treacherous obstacles. On their journey, they encounter a mysterious villain named Safin, played by Rami Malek, who has access to advanced technology that can kill anyone using their DNA. Bond and new 00 agent Nomi, played by Lashana Lynch, put their lives on the line to save the world.

Although many actors have played the role of Bond, Craig, widely accepted as one of the best James Bonds, does an impeccable job. He brings a new level of intensity to the film by incorporating a substantial amount of action and dangerous stunts with motorcycles and hand-to-hand combat. Craig’s stunts in “No Time To Die” are unlike any Bond film ever; his hard-working attitude and passionate emotion in the role of James Bond makes him one of the best actors. Unfortunately, this will be Craig’s final James Bond movie, although the series will likely be perpetuated with new actors, as the Bond franchise switches actors regularly.

Lynch’s performance of Nomi, a new 00 agent in the MI6, is outstanding. Lynch made history as the first Black female 00 agent in a James Bond movie to play a lead role. In her preparation for the film, the actress made it her mission to use her voice and be a spokesperson for her race and sex. Lynch has inspired others to speak up and be a part of their own conversations with race, gender and culture. During her role of Nomi, she plays an astonishing role with power, quirkiness and secretiveness, setting a high standard for future Bond movies. Bond and Nomi meet in Jamaica, where they are introduced to each other and gradually find respect for one another throughout the film. Nomi was always on the hunt for Safin, and with Bond’s help, the two function as a dynamic duo to protect the world from Safin. With “No Time to Die” being the first Bond movie to have a female in a lead role, the importance of her performance in the film is special. As Bond fans leave the theater, they’ll be left with only content and inspiration.

James Bond’s “No Time To Die” is a high-quality film and does not let fans down. It includes beautiful scenery, emotion, action and intensity, and is bound to keep you on the edge of your seat the entire film. With highs and lows, your mind is engaged from start to finish. This movie is a must-see if you love tension, mystery and suspense.