How brilliant are our solar panels? 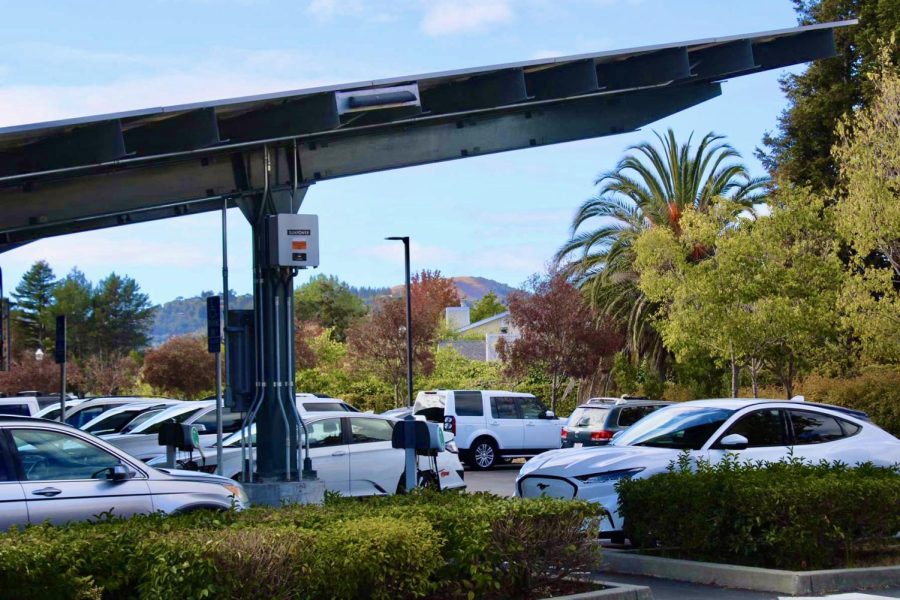 Hanging over the cars, the piers and heavy construction work of the solar panels are shown on the siding.

Soaking up the sun to power the surrounding buildings, black solar panel grids sit above the parked cars in Redwood’s front lot. These clean energy producers barely cross the minds of students and members of the Redwood community, despite standing tall at the front of campus.

Back in 2015, Redwood High School installed photovoltaic (PV) solar panels in the front parking lot. 1,620 solar panels, each containing 435 watts, were placed in a solar canopy offering four electric car charging stations and numerous shaded parking spots. However, the data on solar panels in regard to energy and financial savings has not been recently publicized to the majority of the Redwood community. This poses the question: How did we get these solar panels and are they worth the cost?

Tamalpais Union High School District (TUHSD)’s main goal when installing the solar panels was to decrease the electricity rates for which the district pays. The panels were intended to produce savings over time, minimize greenhouse gas emissions and lessen the school’s reliance on commercial energy. According to David O’Connor, TUHSD Director of Maintenance and Operations, the solar panels have offset 85% of the school’s energy costs. In addition, the panels were predicted to reduce greenhouse gas emissions by 600 tons per year — the same as removing 125 cars from the road.

After deciding to integrate clean energy into Redwood’s landscape, TUHSD officials chose the corporation SunPower to purchase and install the solar panels. According to a TUHSD solar panel project binder belonging to Chief Financial Officer Corbett Elsen, there were three vendors who interviewed in front of a selection team consisting of two district staff, one Kenwood Energy Staff and one Public Financial Management Inc. staff, both companies being consulting services. The team selected SunPower because of their more efficient solar panel options, allowing for a smaller installation area, as well as a qualified team of interviewees who were able to answer the district’s questions and construct a thoughtful design.

Throughout the process, a solar project committee assembled to make decisions such as choosing not to incorporate solar panels into the back parking lot in addition to the front lot. In the end, they concluded that building solar canopies in the back parking lot would not make economic or geographical sense.

After rounds of revisions, the solar panel project proposal called for almost $3.5 million with a 10.5-year lease. The district relied on bonds for a portion of the payment. According to a 2015 Bark article by Camille Kawawa-Beaudan, $600,000 of funding came from a 2006 bond and another $160,587 came from Proposition 39 (California Clean Energy Jobs Act). The rest of the funding came out of the district’s cash reserve.

While the original contract only called for $3,427,961, design and construction changes increased the contract by $112,354.66, creating a final total of $3,540,315.66 for the project. These prices include labor, PV modules, inverters, parking canopy, balance of materials, electrical vehicle charging stations and construction materials.

“[MCE] broke the ground and stood up to all the challenges that PG&E threw at us … We’ve helped push PG&E to provide and create a cleaner energy mix. We’re providing and actually creating some of our own energy now, as a public agency, at rates that are competitive with PG&E,” Rice said.

According to Rice, there’s a relatively quick payoff with solar energy: around seven to 10 years for the purchaser to get their money back. In addition, she stated that there were more grants available to fund these clean energy projects for public agencies (such as public schools) as opposed to private businesses and residences. She also advocates for schools and businesses to utilize solar energy since these entities already consume energy during the daytime.

“[For] schools [or] any of the larger commercial buildings or institutions, [it is] really important for them to be utilizing clean energy because you actually do have such a draw [of energy], especially during the daytime… Right now a lot of the supply of clean energy is during daylight hours … so to have those kinds of institutions and large energy users that are mostly up and running during the day, like a school, using clean energy is really, really important,” Rice said.

According to O’Connor, the solar panels currently have an annual energy generation of 1,150,000 kilowatt-hours (kWh), which was what SunPower had predicted. This is different from what was mentioned in a 2016 Bark article written by Mary Winnick where O’Connor was a primary source, which stated that the solar panels would be producing over this estimated amount of kilowatt-hours.

“​​Despite the fact that there was less sunlight last year than the school expected, the panels are still producing more energy than the 1,150,000 kilowatt-hours SunPower Corp. projected before the panels began functioning,” The Bark reported.

However, the solar panels have also had some maintenance issues, raising the question on how much Redwood has spent on the upkeep of the panels. The Bark reported in 2016 that rainwater caused short circuits in the combiner and there was even smoking solar panels due to heavy rains. But, SunPower had made adjustments to all the newer panels to ensure it wouldn’t happen again.

Regardless of a few shortcomings in the solar panels, it was a significant decision TUHSD made to contribute to a cleaner environment and a healthier planet. The solar panels seem to be consistent in their clean energy production over the past six years they have been installed for. Hopefully, the district can amass enough funding and find ways to incorporate clean energy into Tamalpais and Archie Williams High School.