Rolling the ball into the upcoming Redwood basketball season 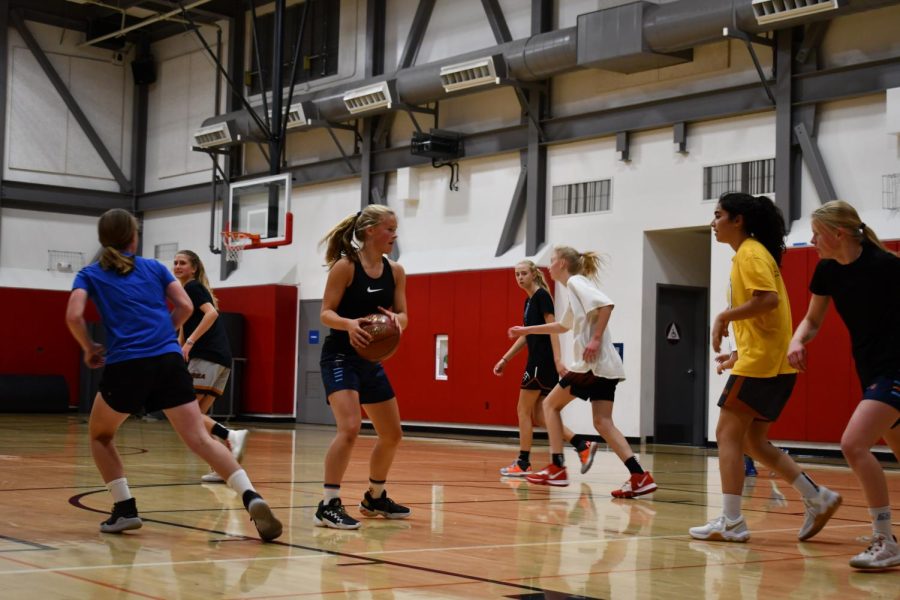 As the winter season starts raining down on Marin County, Redwood basketball players are preparing for their upcoming season. The varsity players have been leading open gym sessions since the start of October for both the boys and girls teams. The sessions will be held until the end of the month, with tryouts beginning the following week.

“This year, the [Marin County Athletic League (MCAL)] is ours to win. We have all of the key components: players, coaching staff and facilities that will help us be the best version of ourselves [on the court,]” Starbird said.

Starbird has been playing basketball at Redwood for the past 3 years, and is hoping to take advantage of his experience on the team as a way to sharpen his leadership skills by promoting camaraderie among his teammates.

“In the offseason, players are playing on different club teams, not hanging out and developing chemistry outside of the sport. I want to help the team get closer, especially with the younger kids,” Starbird said.

On the girls’ side of the court, Zach Borello is making his Redwood coaching debut as the new girl’s varsity coach. In the 2019-2020 season, Borello led the Branson team to the top at thet Northern California varsity girls’ basketball championship. Given his success with previous high school teams, Borello is predicted to lead the Redwood girl’s into a victorious season.

Borello’s goals for the upcoming season are ambitious, but he believes that with Redwood’s current roster, they’re within reach.

“This season, I want to take Redwood to the Northern Coast Section (NSC) DI (Division 1) championships. Our players have so much potential, and if we all are on the same page throughout the season, the MCAL championship will be ours,” Borello said.

Taking advantage of the pre-season training sessions, Borello is getting his players in shape and prepared, while also allowing the team to step into leadership roles.

“We have open gym twice a week, as well as weights practices twice a week. The [open gym] practices are non-structured: I just give them guidance throughout the practices, as league rules prevent me from coaching,” said Borello. “These practices are very productive, as they are stress free, and the girls work hard and focus on certain aspects of the game that they feel they should work on.”

Four-year varsity athlete and power forward Bridget Rynning thinks highly of Borello, and is convinced that he will help bring home an MCAL championship.

“[Borello] has already laid out a great foundation in the two months that he’s been here. He’s gotten us new balls and other equipment, as well as providing us with an amazing coaching staff. He told us that he will emphasize watching film, both of our team and upcoming opponents, which will help take our team to the next level of competitiveness,” Rynning said. “With our team and this coaching staff, we can definitely win MCALs, and make it far in [NCS].”