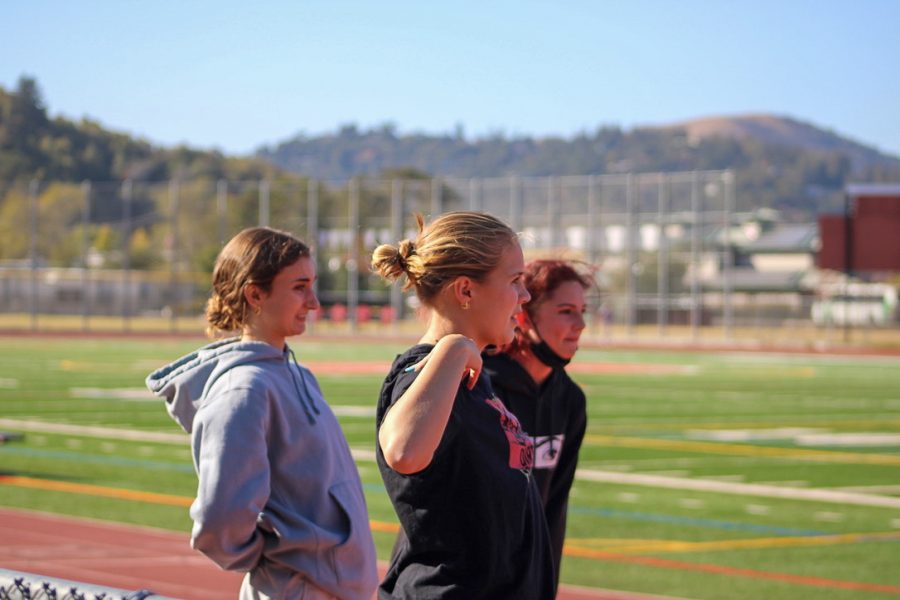 Looking forward to her second track and field season, Jackson (middle) is excited to train in the fall with the sprint country team.

In a season reigned by five kilometer races and long distance runners, a new group has stepped onto the track and asserted their place in fall sports. Upon its arrival, Redwood welcomes the first “sprint country” team.

irst season. Just months ago, Rasmussen led Redwood’s track and field team to success as the senior team captain. Now, he gladly returns to Redwood’s Basham track, hoping to give back to the team that supported him throughout his four years at Redwood.

“It is really neat to have a different perspective on the team,” Rasmussen said. “Working with Coach G, seeing how dedicated she is in developing the team and helping me make this program a reality — it is an amazing thing to see the same team, but from the other side.”

Rasmussen first began running track during his time at Del Mar Middle School. As a freshman at Redwood, he joined the cross country team but quickly realized that his strength lay in short distance running. From there, he continued on as a four-year varsity track and field athlete specializing in the 100 and 200 meter dashes.

“My favorite thing about track and field is the ability to go all out in the short sprints,” Rasmussen said. “All of the effort that you put into training is released within a 10 to 12 second period of power.”

Rasmussen hopes to see the sprinters build up stamina throughout the fall go onto win to the Marin California Athletic League (MCAL) championship in the spring. In the three-month sprint country season, Rasmussen is focusing on the needs of individual athletes and emphasizing strong technique and running form.

“I’ve been asking a lot of the athletes what their personal goals are and then I get them started on the process of actually achieving them,” Rasmussen said. “I’d say this is equally important, if not more important than winning MCALs, because when you focus on personal improvement, the larger goal usually falls in place.”

Junior Logan Jackson enjoys having a recent alum as her coach who recognizes firsthand the demands of high school.

“[Rasmussen] can relate to us as students and understands when school work takes priority,” Jackson said. “He’s really able to build off his own experience on the track team and tells us on challenging runs, ‘This is going to be hard, but I’ll give you extra rest because I remember struggling.’”

During this time in the previous years, Logan would have played on the court with her club volleyball team. Jackson, never before a runner, joined the track and field team last spring hoping to replace volleyball with something less competitive while still exercising and meeting new people. When the sprint country team began practicing in the fall, Jackson eagerly joined.

“Sprint country is a place for me to do the thing that I love with people I like to hang out with,” Jackson said. “I’ve made many new friends through the team, and it gives me a space vent about stress and school.”

While Jackson primarily participates in field events during the track season, she sees the short distance training through sprint country as a way to refine her technique long term. She also feels that the team atmosphere is supportive regardless of one’s running ability.

“I’m not necessarily the fastest runner, but I do sprint country because I want to improve,” Jackson said. “Everyone is really friendly and it is not a judgemental nor harsh community. We all start at different places, but we all want to get better.”

Similarly to Jackson, senior Devon Soofer recently transitioned to short distance running and finds the sprint country team to be a great program for new sprinters. Soofer joined Redwood’s cross country team sophomore year, after transferring from the Drew School in San Francisco, intending to give herself a routine form of exercise and a space to meet others. She continued cross country through junior year but never truly enjoyed distance running.

“Joining sprint country was a super spontaneous decision for me,” Soofer said. “I signed up for cross-country, but on the first day of practice I told myself, ‘You know what? I’m going to try something new.’”

On the team, Soofer finds herself much more excited about running than she was in previous cross country seasons.

“In sprint country, it’s okay if you’re not good. I used to care so much about my times, but now I know that all of that does not matter as long as I put my best foot forward and have fun when I run,” Soofer said.

Rasmussen works hard to promote the uplifting team culture that Soofer and Jackson value. As a recent

graduate, he knows what kind of coaching runners need to give them a leg up both on the track and in school. While Rasmussen strives to keep practices enjoyable, he emphasizes the importance of improving the team’s times, form and technique.

“One thing that Coach G taught me was to be kind but enforce the standard when you’re in practice [that] you should be working hard,” Rasmussen said. “You can socialize, you can have fun and I’ll be respectful if you have an injury or if you are too tired to the point of hurting yourself. It’s totally fine to take a break, but if you’re messing around, you have to get back to work. You’re here to have fun, but you’re also here to train.”