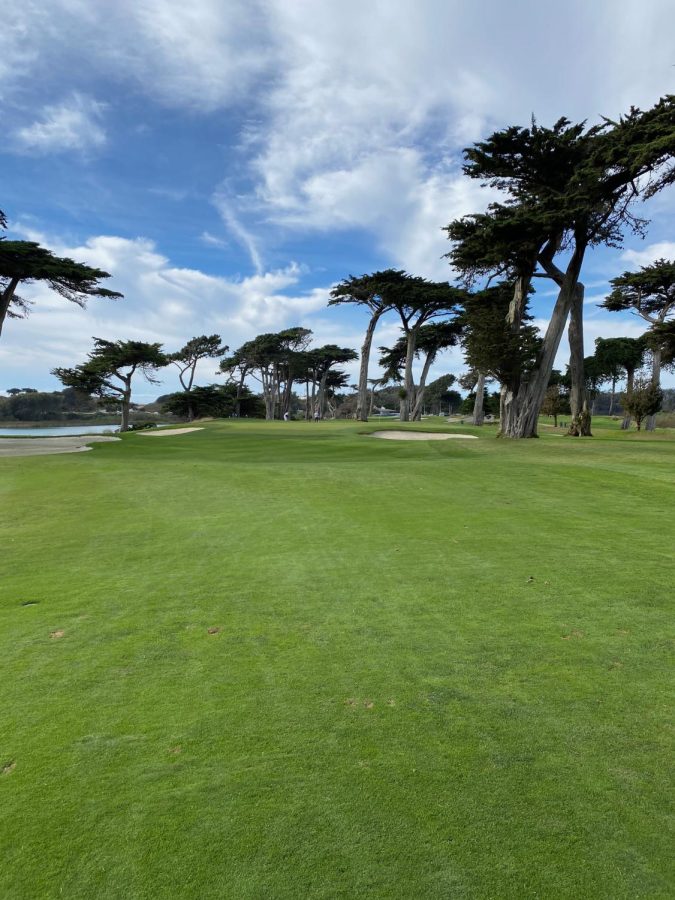 Perched above Lake Merced, the short par 4 16th serves as a highlight of the round.

Home to the 2020 PGA Championship, Tournament Players Club (TPC) Harding Park in San Francisco’s western quarter functions as one of the top public golf courses in the Bay Area. Undeniably, there is an allure to playing the same holes where Collin Morikawa won his first major championship in August of 2020. While the course’s illustrious past is a sure way to attract golfers, the course itself is one of a kind, living up to its high expectations.

The front nine begins snaking through the interior of the property with little elevation change. Despite this flatness, Harding’s first-half layout is anything but inconspicuous. The trademark thick rough that is constant throughout the round penalizes even the slightest miss off of the tee. Conservatism is not the answer to finding these narrow fairways, though, as the sheer length of most holes forces an aggressive first shot. With its tight fairway bending slightly to the right, hole two is a testament to the necessity for precision off the tee. The hole doglegs about 260 yards from the tee, leaving the average golfer with a small landing zone where the slightest imperfection will result in a buried or blocked-off second shot.

The towering Monterey cypress trees lining the fairways pose another challenge to Harding’s patrons. The thick branches consume errant and even on-line shots, adding to the already mounting pre-swing anxiety that characterizes a day at Harding. These trees are used as barriers through the entirety of the course and accompany the lush shrub on the banks of the adjoining Lake Merced. In the evening sun, western-facing holes are lit up through the trees’ limbs, dramatically showcasing the club’s concave greens and routing.

The hardest hole in my experience, as well as golfers’ collective experience, is the number-one handicap hole four. Playing at 606 yards from the championship tees, the hole offers a grueling test that pits players against a sharp dogleg left (with cypresses ensuring no corners are cut) and one of the slimmest fairways of the round. In every capacity, this hole is the epitome of Harding Park’s front nine, as the protected fairway glides on and on to a green that requires a precise short game and carefully placed approach.

Harding’s back nine opens up the course to a more unique routing. It forms the outer edges of the development and allows for more creativity in play than the front. The sloping fairways, protected greens and gettable par fours and fives allow the course to take on a whole new tone in its final stretch. The 16th, the location of Morikawa’s now famous eagle en route to his first major, is a standout. The short hole’s green is reachable in one by most pros but is a foolish expectation for the vast majority of the golfing population. Still, the slight dogleg right gives players a chance for the rare wedge approach for a green in regulation. The hole is on the southwesternmost part of the course and features views of Lake Merced’s rowers as well as the accompanying sunset on the Pacific Ocean.

The final hole is a testament to the balance of difficulty and enjoyment that Harding is able to strike. Drives on 18 must carry a swale of lake water and lake weeds to set up for a mid-range approach shot to an elevated green surrounded closely by bunkering and rough. With the prongs of Sutro Tower in the background, TPC Harding Park ends picturesquely. The long round has come with its flaws though. The greens are slightly war-torn with ball marks, and pace of play is often slow, as is typical of public courses. Still, the accessibility of such a course that combines great holes with pro-level difficulty and unmatched San Franciscan scenery makes TPC Harding Park an essential destination for local and traveling golfers.