Behind the curtains of Stapleton Ballet’s production: ‘The Nutcracker’ 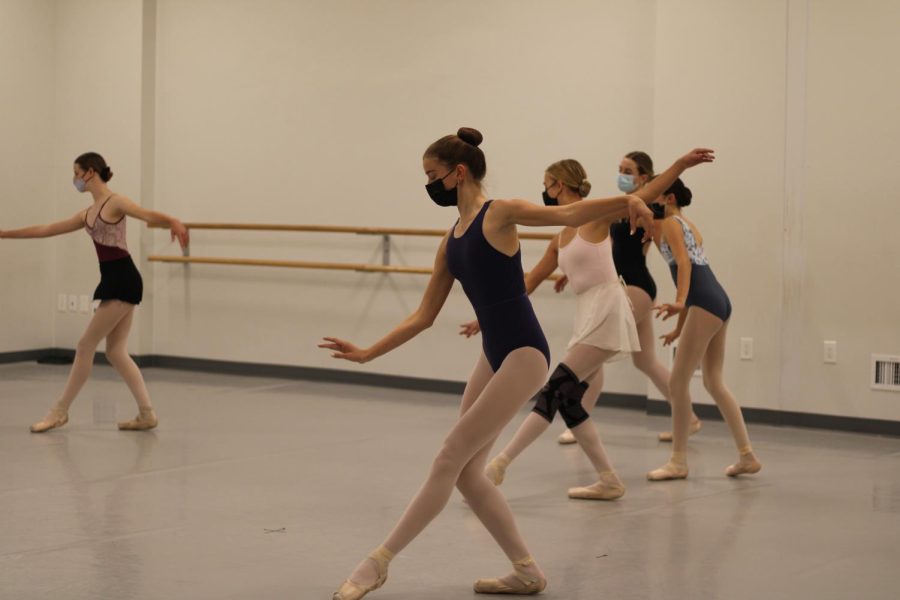 For families across the country, the upcoming holiday season is incomplete without attending a production of the ballet classic, “The Nutcracker.” Every year, the Stapleton School of the Performing Arts (SSPA) puts on their own “The Nutcracker” starring many ballerinas who are students at  Redwood. The dazzling sets, glimmering costumes and mesmerizing pirouettes transport the audience to a whole new world. However, what people do not see are the months of hard work and preparation by the dancers, directors and volunteers in order to make “The Nutcracker” a magical experience.

Starting as early as July, “The Nutcracker” workshops are held, providing dancers with practice on the roles they plan to audition for. Casting is posted about a week after auditions are held, usually sometime around mid-September. Sacrificing much of her summer, Sophia

Acker, junior and dancer of eight years at Stapleton Ballet, appreciates the significant amount of time it takes to participate in “The Nutcracker.”

“A girl my age usually has two to three roles, which means we are rehearsing four to six times a week on top of our regular classes. As the production reaches the performance date, Stapleton [Ballet] starts to piece the scenes together to eventually rehearse the whole act,” Acker said.

While dancers continue their rehearsals, parents of dancers volunteer to alter and personalize over 150 costumes in order for them to properly fit each dancer. This long process starts in September and continues until Dec. 4th. Jennifer Hafner, mom to Ava Hafner and former Stapleton Ballet dancers, Ruby and Cally Hafner, will spend up to eight hours customizing costumes for just one dancer.

“[SSPA] usually has about 10 people who are on the costume team, some are new and some have been doing it for a few years. In the past couple weeks, I have probably spent 40 hours working with the Snow Trio costumes, ripping out the hook and the eyes on the back and adjusting measurements in order to fit the girls properly,” Hafner said.

Hafner doesn’t just volunteer because she enjoys sewing, but because she understands the value of having high-quality costumes onstage.

“I want every dancer to feel as though they are a million bucks when they appear on that stage,” Hafner said. “Having a costume that looks good and feels good gives them confidence and enhances their dancing.”

Stapleton Ballet’s “The Nutcracker” experience would not be possible without the company’s founder, Virginia Stapleton. Initially, Stapleton, previously a professional dancer at the San Francisco Ballet, never intended on opening her own studio. However, after teaching children at San Anselmo Recreation for many years, she was inspired to start SSPA.

Stapleton relies on many unsung heros to produce a successful show. Volunteers complete everything from moving sets to organizing program ads that bring in additional revenue to support the studio’s growth, allowing dancers to have a solid dance foundation and friendships that will last a lifetime. Acker reflects on relationships she has made from participating in eight years of “The Nutcracker” performances.

“I continue to dance in “The Nutcracker” every year because it’s a great community. When we aren’t dancing we will usually eat together at the cafe next door, allowing us to spend time together even when we aren’t dancing,” Acker said. “A lot of the dancers don’t go to my school or are in the grades below or above us, but while we dance we put everything aside and really just have fun doing something we all love together.”

After watching their months of hard work go by in an instant, Acker, along with many other dancers, is left with feelings of pride and nostalgia. .

“After the final curtain closes, many seniors will hug each other because it’s their last year. Before the show everyone has nervous excitement and after, people have a sense of relief, but also [a] longing to do it all again,” Acker said. “It’s not just your hard work, it’s everyone’s. It takes a team to produce a ballet so full of life.”