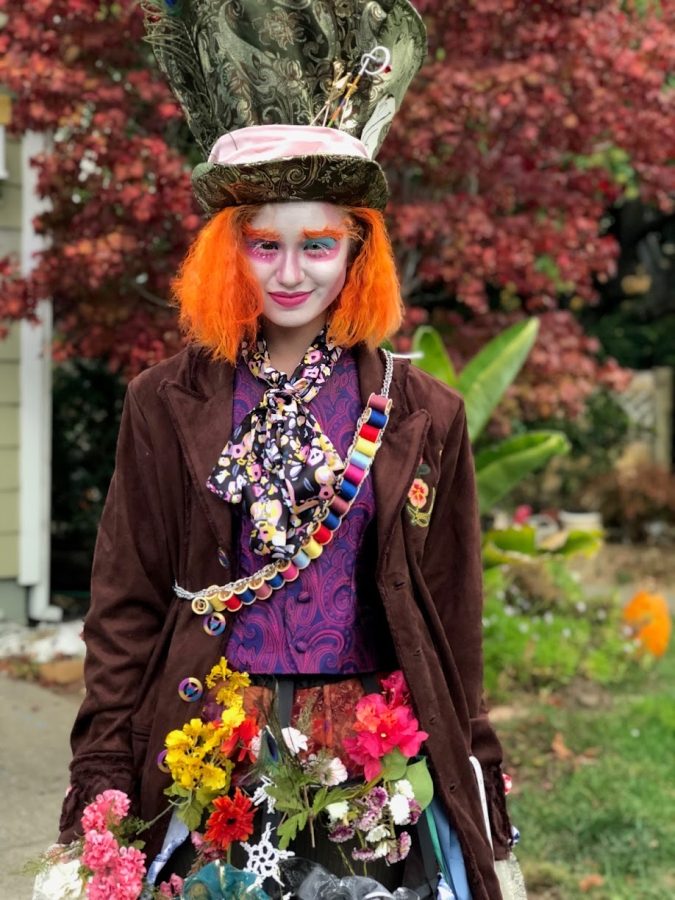 On Halloween, dressing up is the norm; wearing animal ears or plastic fangs won’t solicit more than a passing glance. It is a day full of sugared-out kids, costumes of every imaginable type and in senior Elena Wang’s case, art. Whether it involves gluing burlap to her face or crafting a foot tall hat, Wang’s extreme costumes show skill in the form of a Halloween thrill.

According to Wang, her ensembles have become an “identifier” for her. Her close friend and fellow senior Raine Conti said that dressing up for Halloween has become a tradition and an expectation from Wang.

“People are always on the lookout because they know [Elena’s] going to go above and beyond,” Conti said.

In Wang’s situation, going “above and beyond” requires serious commitment. Coming to school in a complete costume and makeup takes Wang hours to put on, often forcing her to wake up long before school starts.

As a formerly timid, new student at the Neil Cummins Elementary School in fourth grade, Wang’s costumes initially helped her to come out of her shell.

“I was really shy, and Halloween was the first time that people recognized me or I stood out in any way,” Wang said.

“My first impression of her was in fourth grade. It was Halloween and I’d never talked to her before, but I remember she was already decked out as an elementary school kid,” Conti said.

Wang has been dressing up in elaborate  costumes since she was in kindergarten and over the course of the years, their significance has grown with her. At first, Wang enjoyed the attention dressing up came with. As time went on, Wang grew to love the craft and hopes the costumes will be gratifying for those around her, as well.

“It’s a lot of satisfaction to have an artistic project that people get joy out of. It’s something people can think about and remember with almost a childish sense,” Wang said.

Wang is not alone in keeping the fabulously frightening tradition. She and the same crew from middle school have been putting together group costumes every year.

“As we get older, people don’t want to dress up as much. [Groups are] a motivator and more of a ‘wow’ factor than just one person,” Wang said.

“It was a symbol to me of being a part of a group and it was a constant, fun thing that brought us all together,” Chaver said. “Without [Elena being] really invested in it I would honestly just treat it like any other day.”

Even within the group, Wang’s costumes still outshine her friends’.  Chaver considers herself to be a supporting piece with Wang being the focal point. Cheering on her talent and doing their best to maximize her creativity, Wang’s friends always make room for Elena to go all out.

According to her friends, the group effort to show off Wang’s handiwork is well earned.

“I’ve known her for a long time. She’s definitely one of the most hard-working people I’ve ever met and that comes across in her Halloween costumes,” Conti said. “When she finds things that she’s passionate about, she really dedicates herself and never gives less than 100 percent.”

As an artistic individual, costume-making is one of her many distinct qualities, and allows her personality to shine through.

“It feels very ‘Elena’. It reminds me of how she moves through the entire world. Whenever she approaches anything she’s like, ‘What’s the coolest way I can do it? What’s the most interesting, the most complex way that I can produce something that’s challenging?’” Chaver said.

The finer details of this year’s look are best left to be revealed the day of. Here’s a hint though, think “ocean.”