True crime will be the death of morality 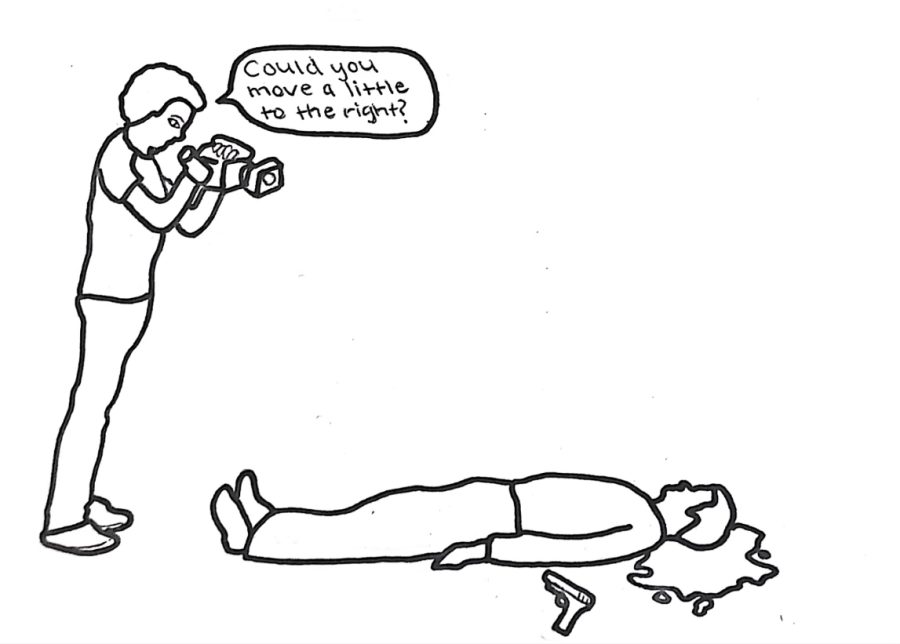 As I sat in my seventh-grade civics class, with 30 minutes left in the period and our lesson already completed, a realization dawned on me: I was about to be subjected to my worst fear. I watched as my teacher changed tabs from Crash Course to Amazon Prime Video, a common occurrence in that classroom, and my whole body began to tense as I thought of what was to come. The look of joy on my teacher’s face confirmed my suspicions: we were going to watch an episode of “Forensic Files.” For those unaware, “Forensic Files’” is a true crime series that graphically depicts real homicides and serial killings. All over the classroom, I saw grinning faces as they watched blood splash, weapons drop and victims’ bodies freeze into demise.

From “Making a Murderer” to “Law and Order True Crime” to “Casefile,” true crime manages to hit the tops of charts, ranked as the third most-watched genre of television in 2020, according to the Statistica Research Department. Millions of viewers sit down to watch gruesome stories of killings, and oftentimes, forget that the victim was once someone’s family, friend or significant other. The production of true crime entertainment should be terminated, to protect victims’ families, as well as consumers, from the negative impacts of true crime media.

Victims’ loved ones are forced to relive the horrors of the victim’s death regularly with the popularization of the true crime industry Even worse, creators of true crime entertainment rarely ask victims’ families for permission before including them in their mediums. According to Time magazine, the team working on “I am a Killer” — a show about Lauren Haugen, who murdered her boyfriend — ignored the boyfriend’s family’s desires for them to halt production.

Not only are victims’ families impacted by the distribution of true-crime entertainment, but the minds and behaviors of consumers also face harsh detriments. According to Glenn Sparks, a professor at Purdue University who has studied the effects of media violence, watching true crime can desensitize audiences to violence, making them more inclined to tolerate it in real life and most dangerously, make viewers more likely to engage in violence themselves. Aside from behavioral changes, there are also physical reactions to being exposed to heavy amounts of violence. Studies conducted by the Cleveland Clinic have shown that watching true crime television can lead to anxiety, heart palpitations, paranoia, agoraphobia (a fear of people) and more.
Nonetheless, true crime’s popularity has not faltered since its gain in popularity during the 1970s. As mediums of media continue to develop, the glorification and sensationalization of murders has become worse than ever before. On TikTok, many young teenage girls created content sexualizing Zac Efron’s portrayal of Ted Bundy in the movie “Extremely Wicked, Shockingly Evil and Vile.” Multiple video edits of Zac Efron were made in his role as Bundy. The comments were filled with, “God! He could do anything he wants to me,” “Honestly, I wouldn’t mind it if he killed me,” and “I would f*ck Zac Efron as Bundy.” Even worse, people began sexualizing Bundy himself; one user posted a TikTok with the text, “Say what you want about Ted Bundy, but look how hot he is,” followed by videos and photos of the serial killer responsible for killing and raping presumably more than 30 women.

Many are unaware of the issues regarding true crime and as a result, continue to watch these shows as a source of entertainment. This is because scientifically, true crime is entertaining. According to Scott Bonn, a professor of criminology at Drew University, “The actions of a serial killer may be horrible to behold, but much of the public simply cannot look away due to the spectacle.” This can also be shown at Redwood with 64 percent of students watching or listening to true crime series according to the October Bark survey. Despite the entertainment value of these shows, before we watch true crime, we should ask ourselves one simple question: Should our source of entertainment be derived from others’ tragedies?

This clear sexualization and glorification of serial killers by the entertainment industry has been severely fueled by the increase of true crime media and needs to come to an end. Although press coverage of serial killers and homicides is necessary, the sensationalization of murders is harmful to victims, as well as viewers. When watching true crime, it is important to remember that the victims were real people with loved ones who led meaningful lives, and are not objects of entertainment to indulge in for pleasure.