Power in pink: Women warriors in our community

“[Breast cancer] is the number one thing on your mind at all times. You run into people in the market or you talk to your friends or your coworkers. ‘What did you do last weekend? How are you? Have you seen any great movies?’ And all you’re thinking about is cancer, cancer, cancer,” breast cancer survivor and Redwood parent Jennifer Ginsburg said.

Jennifer was diagnosed with breast cancer in October 2013, after mammograms and biopsies revealed a malignant, or cancerous, growth.

“That was a tremendous shock to me. I was 42, which is considered pretty young. I had no immediate history of breast cancer in my family. I had not felt a lump or anything unusual with my breasts,” Jennifer said. “[I was] really overwhelmed with what to do next because you don’t know what to do next.”

Jennifer found the breast cancer treatment process to be very “counterintuitive.” It was not until the end of November, 10 days after removing both breasts in a bilateral mastectomy, that the pathology results came back to provide information about the tumor. As an “action-oriented” person, this experience of waiting was extremely challenging for Jennifer.

“When a doctor tells you that you have cancer, the first thing you want to do is get it taken out. You don’t want to walk around the world knowing that there is cancer growing inside of your body,” Jennifer said.

“At least for my brothers [Zach and Charlie Ginsburg] and I, it was just a really strange concept to grasp,” Julia said. “Even though it was stage one breast cancer and my mom was going to be okay, just the thought of my mom having cancer really scared me. [I thought], ‘What if my mom is going to die?’ I couldn’t really fully understand what was going on.”

Thankfully, Jennifer has now recovered and says she was lucky to have many supportive family members and friends during that difficult time. They would help Jennifer on a daily basis, whether that meant walking her dogs, driving her children, bringing meals or simply asking if there was anything she wanted.

“You really see the people, the power of your world and how your friends can stand up for you. [You see] how unbelievably generous and giving they can be when you need it,” Jennifer said.

Sophomore Charlotte Brod’s mother, Kacey Brod, is another local breast cancer survivor. She discovered she had the BRCA2 gene in 2010, putting her at high risk of getting ovarian cancer, breast cancer, melanoma or pancreatic cancer. In 2015, Brod had a swollen lymph node under her arm that was classified as aggressive, stage two breast cancer.

“Cancer is a very interesting thing, just from a psychological standpoint. When you get the diagnosis, people react in different ways and a lot of times people don’t know how to react and they don’t know what to say,” Brod said.

Brod’s reaction, however, was that due to her genetic predisposition, it was just “a matter of time.” Nonetheless, having the BRCA2 gene allowed her to be part of a University of California San Francisco study where she went through an alternative chemotherapy process. Brod received the more intense chemotherapy at the start of her treatment and a lighter dose at the end. In total, she went through 16 rounds of chemotherapy, had a double mastectomy, an oophorectomy and multiple lymph nodes removed.

Brod found that after this arduous experience, she became more empathetic towards others going through breast cancer. She now speaks and offers her knowledge to people who are currently being diagnosed or treated for cancer.

“[Breast cancer is] hard to navigate. There’s no manual on how to go through this so talking to people who have gone through it, who have had relatively positive experiences, can be really helpful,” Brod said.

“It’s a sisterhood that I never wanted to be in. But I’m in it for life and I take that very seriously,” Jennifer said.

Despite not having breast cancer, Redwood parent Dana Linkersteele was also diagnosed with the BRCA2 gene. She discovered it after getting a rare form of melanoma on her palm in November 2018 and her sister testing positive for BRCA2 in March 2019. As a result, in July 2019 she had a double mastectomy, an oophorectomy and a hysterectomy to prevent developing cancer. Linkersteele said that although for many this decision could have been difficult, for her it was easy.

“I love my children. I love my husband. I love my life. And I want to do anything that I possibly can to ensure that I can live as long in the life as possible,” Linkersteele said.

Having now recovered, the big conversation in Linkersteele’s family surrounds her two daughters, senior Sarah Steele and Redwood alum Lauren Steele. The family must decide when it is an appropriate time to get the daughters tested and were suggested to wait until they are between 23 and 25. Thinking beyond her children, Linkersteele said more people should be informed about the gene and its implications. 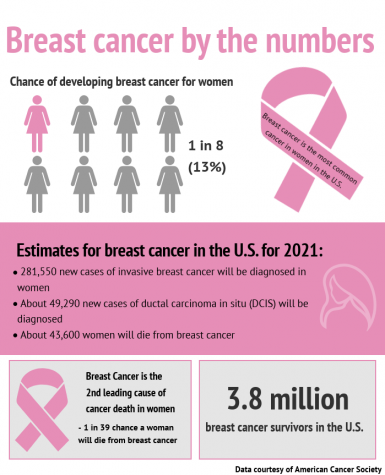 “I think [in the] bigger picture, [it is important] to make sure people are educated and aware about BRCA and the risk factors for BRCA, and whether they actually have breast cancer or the gene, [to help] people that I know make decisions as someone who went through it,” Linkersteele said.

Although Jennifer, Brod and Linkersteele have hopefully gotten past the most difficult parts of their experiences and now support others by sharing their knowledge about breast cancer and the BRCA gene, that does not mean it no longer affects them.

“[Breast cancer] absolutely impacts my life each and every day. Still, this many years later, there’s no way to go through an experience like breast cancer … [without it shaping] you forever. Bad. Ugly. All of it. There are certain blessings that come with it. There are hard times that come with it. But mostly the way that I look at my life now is before cancer and after cancer,” Jennifer said.