Redwood comes together at the first-ever outdoor homecoming rally 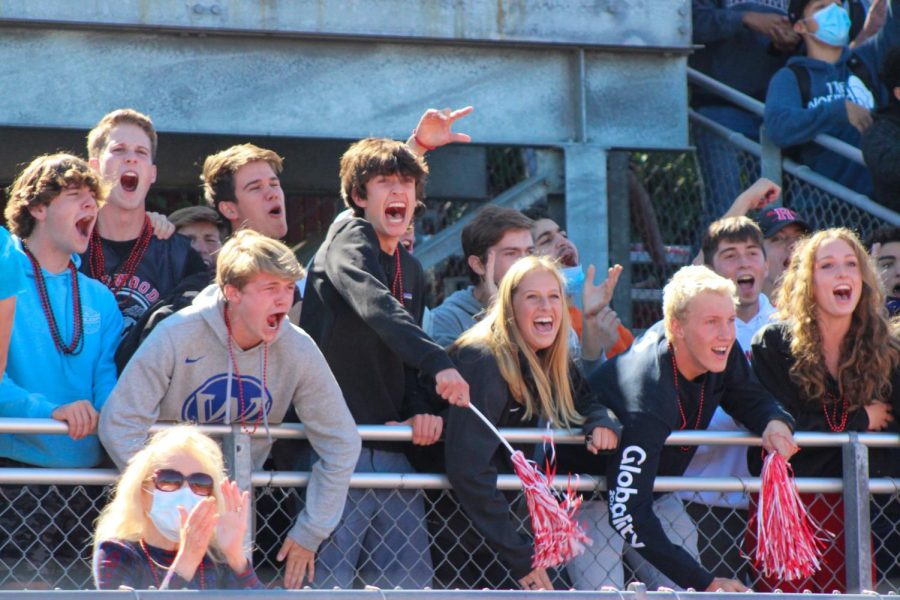 Leaning over the fence, senior students cheer for their classmates as they perform their senior skit.

On Thursday, Oct. 14, Redwood held its annual homecoming rally. Big smiles, cheering students, honorary freshman boo-ing and questionable dance moves made for an unforgettable pep rally. After almost two years of mask mandates and restricted gatherings, the school year has officially kicked off with the first pep rally since the start of the COVID-19 pandemic, and the first-ever outdoor rally. Students screaming, flags flying and spirits soaring were all perfect components for a spectacular rally.

The homecoming rally began with a performance from the varsity cheer team. Cheerleaders flew high into the air to be caught by their fellow teammates on the ground. Class skits proved to be even more entertaining, as the football field gave performers even more space. Every grade performed a skit during the homecoming rally, using various themes to direct their storylines. This year’s overall theme was TV channels: freshmen had the Game Show Network, sophomores had the American Broadcasting Company (ABC) Channel, juniors had the Disney Channel and seniors had the Olympics Network. In the end, seniors took the prize for the best class skit, one of their final victories as Giants.

Another tradition during homecoming rallies is the class flag competition. Every grade crafts a unique flag representing their class to fly at pep rallies during their years at Redwood. During the contest, the class flags waved high in the air, receiving thunderous applause and booming cheers from their respective classes. Sophomores ultimately took home the coveted prize.

Leading up to the weekend before homecoming week, leadership students worked hard to decorate the stairwells to fit their designated theme. The hallways proved to be the perfect way to get school spirit soaring for the pep rally and the entire homecoming week in general. With cutouts of Debby Ryan, drawings of Disney characters, streamers hanging from the ceiling and colorful paper covering the walls, the junior class won the competition for the best hallway decorations.

Despite the lack of a 2021 homecoming dance, Redwood was still able to finish off the energetic week strong with a joyous display of spirit at the rally.