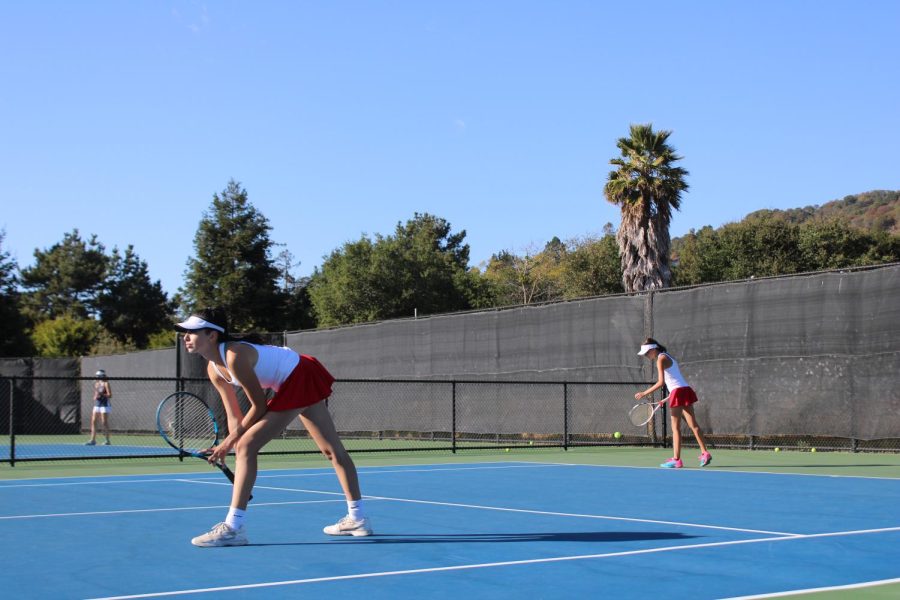 Preparing for the next point, doubles partners Isabella Kraus and Kate Tuhtan get in their stances.

On Monday, Oct. 11, the girls’ varsity tennis team won in another game against Marin Catholic (MC). Redwood took home the win against its biggest rival with a final match score of 7-0. Beating many juniors and seniors from MC, the freshmen players won all of their sets. Cheers could be heard from behind the gates as many Redwood parents and supporters came to see the undefeated team.

Freshman Ella Povio won her match 2-0 against MC junior Kate Block, beating her opponent in the first set with a final score of 6-1 and then followed in the second set with a score of 6-2. Another freshman who defeated an MC upperclassmen was Jordan Martoo, who won both her sets 6-1 and 6-0 against senior Sofia Guerra.

Although Redwood came out victorious, each player faced a rigorous match. In Povio’s match, she had to fight fervently to receive the point. Although she is an experienced player, Povio feels a lot of on-court anxiety when these moments arise.

“During the middle of [my matches] my heart is beating so fast,” Povio said. “It’s really tough to stay in it because your mind is [in] this back and forth [of] who’s going to mess up.”

However an outsider could never tell how nervous Povio was as she played in the number two spot on a ladder of 24 players for singles in this match, though she typically plays the number five spot. Confident in her two set win, Povio believes she has earned her footing on the team after this match.

“I feel like I played really well today. Every match is getting easier for me, because I tend to get a lot of anxiety being on the court.  As I’m playing more matches the anxiety is going down,” Povio said.

Juniors Isabella Kraus and Kate Tuhtan, who’ve been a part of the team since their freshman year, played in an intense match against Paris Marquis and Kaitlyn Bruce. Kraus and Tuhtan have enjoyed seeing how the dynamics between under and upperclassmen on the team have changed, as the skill levels of the incoming sophomores and freshman girls are proving to be better than or equal to their older counterparts.

“The freshmen this year are ridiculously good, and it went from a team of 18 people to a team of 24.  It’s definitely a change,” Tuhtan said.

Winning in singles for both her sets, sophomore Annesley Krawitt played a skillful game with final scores of 6-1 and 6-2. Freshman Julia Laury also won both her sets, winning the first by 6-4 and the second by 6-1.

“We have 11 freshmen and about 80 percent are in the top 15 [of the team],” Kraus said. “That kind of touches on how upperclassmen are [not necessarily] the better ones, and that attitude has totally gone [to] creating a more functional team.”

Kraus and Tuhtan also reflected on how they played in Monday’s match, noting that their  chemistry definitely helped them during their final tiebreak.

“Personally talking about us [Kraus and Tuhtan], [during] our freshman year, our skill level wasn’t as strong. You have to have good chemistry with the person you’re playing on the court with, because you have to be able to communicate with and know your partner. And the same goes for [the] team; you don’t always know who you’re going to play with, and so growing as a team is important,” Kraus said.

In one of the more heated parts of the match, this dynamic duo won the point for Redwood in a tiebreak. The pair had a strong lead, winning the first set 6-2 and losing 2-6 in the second, causing them to go to a tiebreak point — which they won 10-6.

“At first we were starting off strong and I think we faced a couple of challenges, but we were able to push through them,” Kraus said. “I think that’s [because] we’ve been playing since freshman year and we have been able to grow together.”

As the girls’ varsity tennis team remains undefeated, Kraus and Tuhtan see that the next goal for the team is winning Marin county athletic league (MCALs) and going to Northern California Championship (NCs).

“I definitely think we can [win] MCALs. NCs will be tougher because they’re the best teams from all the different counties in Northern California,” Tuhtan said.

The future of the girls’ tennis team is bright and they are looking forward to their next match on Monday, Oct. 18 at Tamalpais High School at 3:30 p.m.