20 years of remembrance: The lasting impacts of 9/11 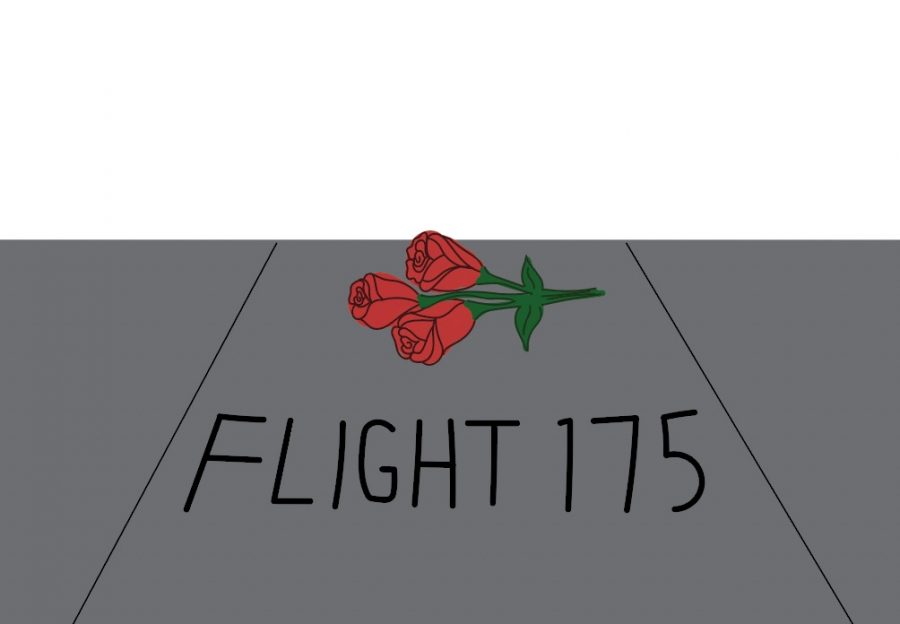 “It was like confetti, as if they were having a parade on Broadway for the New York Yankees winning the World Series … But there were also balls of fire bigger than basketballs, just black gobs of stuff on fire that were falling down. [I had] absolutely no idea what had happened,” Marin County resident Douglas (Doug) Brown said.

On Sept. 11, 2001, members of the terrorist group Al-Qaeda carried out an attack on the U.S. Four commercial airplanes were hijacked and two crashed into the Twin Towers in New York City. One crashed into the Pentagon just outside of Washington and aiming directly for the capital, the fourth plane crashed just outside the city, rerouted by a courageous passenger uprising. Almost 3,000 people were killed as a result of the attacks, including civilians, flight passengers, firefighters and first responders. Twenty years later, the legacy of this traumatic event still lives on in many Americans.

Doug is one of very few people on high floors of the building to have survived the attacks on the World Trade Centers. Living in New Jersey at the time, Doug had been in a meeting on the 70th floor in World Trade Center Two, eight floors below where the second plane hit.

“It wasn’t too many minutes before a television broadcast said that a plane had hit World Trade Center One. Most of us assumed it was a commuter plane or something that was off-course, flying down the Hudson,” Doug said. “After a few minutes, there was a broadcast saying everyone should go to the [nearest] emergency fire reporting station.”

Doug decided not to follow the large crowd of people exiting through a stairwell, a decision that saved his life. Instead, Doug went back to his office to make phone calls when the second plane hit his building.

“I was sitting at my desk [and] the next thing I knew, I was on the floor … I got up, wasn’t hurt and I walked out from my office and looked out over our open floor and part of the ceiling had fallen, and to my surprise, there were only six of us still left,” Doug said.

Meanwhile, Doug’s wife, Alice Brown, was back in New Jersey and learned of the attack while watching the Today Show.

“As soon as I saw on TV [that] the second plane hit, I knew it was [Doug’s] building,” Alice said. “I guess it never really occurred to me that he wouldn’t come home. And now that I look back on that, I’m thinking, ‘Whoa! How could I not have realized that that was a possibility?’”

Back in Marin, history teacher Lindsey Kornfeld was a student at Redwood when 9/11 occurred. She and other students crammed into classrooms to watch the news of the attacks unfold. TVs strapped to rolling carts displayed the horrifying recordings of the planes crashing, over and over again.

“An image I will never forget is watching that plane hit. And we see it, we show it and we talk about it in school [now], but seeing it first thing [that] morning, not knowing what [was] going to happen next, will always stay with me,” Kornfeld said.

Dean Bonfigli, a lieutenant with the Tiburon Fire District, recalls the same tension that was transmitted from his car radio while driving to work that morning, though he was not in the fire service at that time. Once he absorbed the enormity of what had happened, Bonfigli worried about additional attacks and the global chaos that would ensue following the event.

“I was just shocked [and in] disbelief … But then [there] started to be a little vision of, ‘Oh my gosh! This is going to evolve into something greater.’ More importantly, change was coming. The world as we knew it was not going to be the same,” Bonfigli said.

As Americans like Bonfigli and Kornfeld watched the attacks in safety, Doug’s situation in New York was intensifying.

“I’d had no clue what had happened, the smoke just started to flood in from the floor. We walked around the corner towards the stairs and they [the stairs] were just gone. There was nothing there [but then] out of the dark a voice came that said, ‘Follow me!’” Doug said.

The voice was revealed to be a security guard who led Doug and others to a secret stairwell protected from the crash. They made their way down the stairs, aiding panicked and severely injured victims along the way, including a man named Silvion.

“Silvion, who I did not know at that point in time, had been impaled by shrapnel just above his heart. Luckily it missed and was embedded in his breastbone. He looked like burnt charcoal,” Doug said.

Carrying Silvion to safety, Doug escaped the building and safely delivered him to medical professionals. Minutes later, Doug rounded the corner to wait in line to use one of the only operating landlines in the city. He then watched World Trade Center One collapse to the ground.

After this traumatic event, Doug’s story was featured on an Oprah Winfrey TV special, a 60 Minutes segment and a spread in People Magazine — an example of the heroism and resilience of so many during these horrific times. However, Doug prefers to focus on the people he considers to be the true heroes: the first responders who risked their own lives to save others.

“We got down to about the 17th floor and two firemen were working their way up,” Doug said, looking back on his experiences escaping the desolate building. “I wish I knew who [those] two men were [who] walked up the steps because undoubtedly they died. They were the heroes. The heroes [were] the people walking up the steps.”

Bonfigli emphasizes reverence for the firefighters and first responders who sacrificed themselves on 9/11. He and other Marin firefighters attended the tenth anniversary memorial in New York City in 2011.

“It was an emotional weekend [and] to see the outpouring of support from the communities and to hear some stories were very moving. We wore our class-A uniforms around the city that whole day,” Bonfigli said. “Regardless of what our patch said, people viewed us in the same light. It felt good to be a part of that.”

Bonfigli and other local firefighters have their own way of honoring the firefighters who sacrificed their lives on 9/11. He wears a “343” sticker on his helmet, signifying the number of firefighters and paramedics who were killed as a result of the attacks.

“I wear a 343 sticker on my helmet in memory of the fallen brothers and sisters from New York. [I have] just swelling, pride, just to see the selflessness of the people that day,” Bonfigli said.

9/11 memorials occur annually at churches, fire stations and other locations across the county.

“I know all fire stations in Marin County…  [has] everybody go out by the flagpole and they do a bell ceremony. [The] flags go to half-mast and [there is a] moment of silence. A lot of the churches around the area do a Memorial service and try to incorporate people from the different fire agencies,” Bonfigli said.

This year, on the 20th anniversary, similar memorials are being held throughout the country for fallen American citizens. Christopher (Dom) Colasanti, a 33-year-old husband, and father of two girls, was working in the World Trade Center’s second tower at the time of the attacks and did not survive. A close friend of Colasanti’s from college, Ross Mandell, lived in the Bay Area at the time. Mandell and Colasanti had met as undergraduates at Dartmouth, where they both played soccer.

“I heard the news and I immediately tried to call my buddy who was in the building. Like everyone else, I was trying to figure out what was going on all day,” Mandell said. “As the day went on, we kind of suspected what probably transpired.”

Mandell remembers Colasanti for his unconditional love, loyalty and radiance.

Dartmouth recently built a state-of-the-art indoor training facility, which is used by the men’s soccer team. Friends and classmates of Colasanti raised funds to dedicate the new locker room to their late friend. Mandell, who will attend the official presentation, reflects on how he was changed by his loss on 9/11.

“I always kind of had that feeling that life isn’t fair, but that really made it pretty accurate [and emphasized] the randomness of life. We can be in control and do what we want, but at the end of the day, anything can happen to you. I also have the philosophy of living in the moment and really leveraging every moment you have,” Mandell said.

The events of that day similarly transformed Doug’s outlook on life, and he focused on the importance of helping others and contributing to his own community.

“I realized that it’s better to be remembered than to just die and have all your memories go away. So within a couple of weeks after 9/11, I finally committed to something I’d thought about doing. I started tutoring a second grader through our church,” Doug said.

After tutoring students in New York and Marin County, Doug has devoted himself as a Board Member of the Buckelew Programs, a regional nonprofit providing services in Marin, including mental health counseling, suicide prevention, recovery treatment and assisted living.

The intensity of Doug’s personal experience during 9/11 led to significant life changes. Kornfeld, who was much more distant from the tragedy, reflects on the larger scale of the impact of 9/11.

“I mean, our country’s never been the same. Your generation will never know going to the [airport] gate and [not having] to take off your shoes and [take out] your laptop. Everything from the little things like that through [the fact that] we’ve been at war for 20 years,” Kornfeld said.

Kornfeld was struck by the American patriotism that followed the events in her own backyard.

“I remember there were American flags everywhere [at Redwood]. The spirit ball was painted. People were so pro-United-States,” said Kornfeld. “It didn’t matter your political [views] and I … hope that [Generation Z] will have the chance to see an America that’s as united.”