Swimming in saltier waters: how the drought might have led to more jellyfish 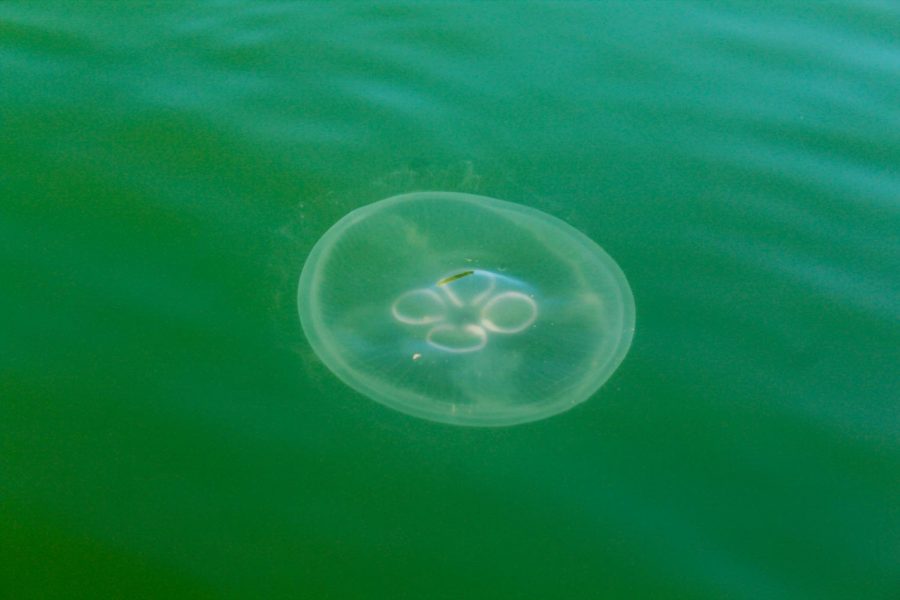 A moon jellyfish swims at the surface of the Belvedere Lagoon

Translucent and white, moon jellyfish are roughly the size of a dinner plate and have little to no sting perceptible to humans, but they have made their presence known in the lagoon. Although jellyfish have swum in the lagoon since at least last summer, their growth in number this year has been unusual enough for residents to take notice. In the past few months, they have become increasingly common to spot floating atop the surface of the lagoon, frightening, fascinating and repulsing many waterside residents. Sophomore Jonah Momsen, who has lived on the lagoon for about 10 years, steers clear of them whenever he can.

“I do not go swimming when I see [the jellyfish],” Momsen said. “We have a rope swing at my house, and my sister went off it once and landed on one. It is not fun to swim when they are in the water. I think people are avoiding [the lagoon] for that reason.”

However, to Momsen, the jellyfish are more of a nuisance than a major hazard.

“Obviously it is not a huge problem that rich people on the lagoon cannot swim sometimes, but it would definitely be cool to solve it and it could be interesting to learn about it,” Momsen said.

Although the jellyfish themselves may not seem like a problem to many, the rise in jellyfish may indicate a greater issue at large for ecosystems and environmental issues throughout Marin. According to Larry Stoehr, Vice President of Operations for the Belvedere Lagoon Property Owners’ Association (BLPOA), the cause of the spike in jellyfish remains unknown. However, he assumes it may have something to do with the drought.

“In the winter time, we get a lot of rain on Belvedere island and on the streets that go into the lagoon because this is a stormwater control system. And so all winter, we are letting water out to keep the homes from flooding and the salinity in our water drops down to below ten parts per thousand, and jellyfish cannot survive in that kind of low salinity. So we think [in the past], that is what killed them,” Stoehr said.

If the drought continues and the lagoon receives little rainfall, there is a good chance that the jellyfish will stay beyond the summer, as the salinity of the lagoon would remain high enough for the jellyfish to survive.

“This last winter, we only got eight inches of rain. So our salinity in the lagoon never dropped below 22 parts per thousand, which is ideal for the jellies. They are thriving. We are hoping that the drought does not run into this winter, because if it does, they will be with us again next year,” Stoehr said. “[Usually during] winter … the salinity drops down to below ten parts per thousand, and jellyfish can’t survive in that kind of low salinity.”

The recent increase in jellyfish is not exclusive to the Belvedere Lagoon either. According to Peter Ruppert, maintenance and facilities coordinator for the BLPOA and Redwood alum, Oracle Park and the Redwood Shores Lagoon are also experiencing growth in their moon jellyfish populations.

“I went fishing yesterday and there were tons and tons of [jellyfish] off the coast. They are not going away soon until we get a salinity change in the [lagoon]. The whole estuary [in the Bay Area] did not get flushed with fresh water. It is not just my lagoon. My lagoon is a micro-entity of the whole system,” Ruppert said.

Increasing jellyfish populations may just be one of several transformations Marin is likely to see as climate change continues. A sign of the severity of the drought, Marin reservoir levels are at historic lows, and Marin Water is even considering desalination projects to refill them. The Marin Municipal Water District recently approved a $2.2 million dollar allotment towards a pipeline between Richmond and Marin county in order to prevent Marin from running out of water. The pipeline could potentially bring up to 15 gallons of water into Marin per day.

The district built a similar pipeline during the drought of 1977. Interestingly, the Belvedere Lagoon also experienced a jellyfish infestation during the 1970s, though the cause remains unknown and the jellyfish were a different species.

“I was a kid when they were here before in the seventies,” Stoehr said. “I went swimming and they would just bombard [me].”

Jellyfish aren’t the only aspect of Marin that climate change is likely to have an effect on. Advanced Placement (AP) Environmental Science and Sustainable Agriculture teacher, Joe Stewart, has already noticed a few small differences in the environment around him.

“I see in my own yard, plants that I am used to seeing flower [around] April starting to flower sooner because it is warmer. Fruit trees flower based on environmental triggers, so if it’s warm for a number of days in a row, or it hits a certain temperature, [some plants] will flower,” Stewart said. “The fires and the droughts that we are seeing are more likely to happen because of climate change.”

Severe droughts mean less rainfall, and although the BLPOA is eager to reduce the population of jellyfish, aside from hoping for more rain, they are limited in their options for plans of action.

Still, many of the measures the BLPOA considered taking to reduce the jellyfish population, by either removing the

jellyfish or artificially adding freshwater to the lagoon, may come into conflict with existing rules and regulations.

“[The Department of California Fish and Wildlife] will not let us remove [the jellyfish]. I can take them out as an individual, but they will not let us [BLPOA] as an organization deal with it,” Stoehr said. “I have even looked at … if we could get treated [cleaned sewage] water put in here. [But] nobody would like [water] coming out of a sewage plant and into the lagoon … I think it would probably be impossible to get the people on the lagoon to agree to that.”

For at least the near future, it looks like the jellyfish in the lagoon are here to stay.