Prep of the Year: JT Dyer 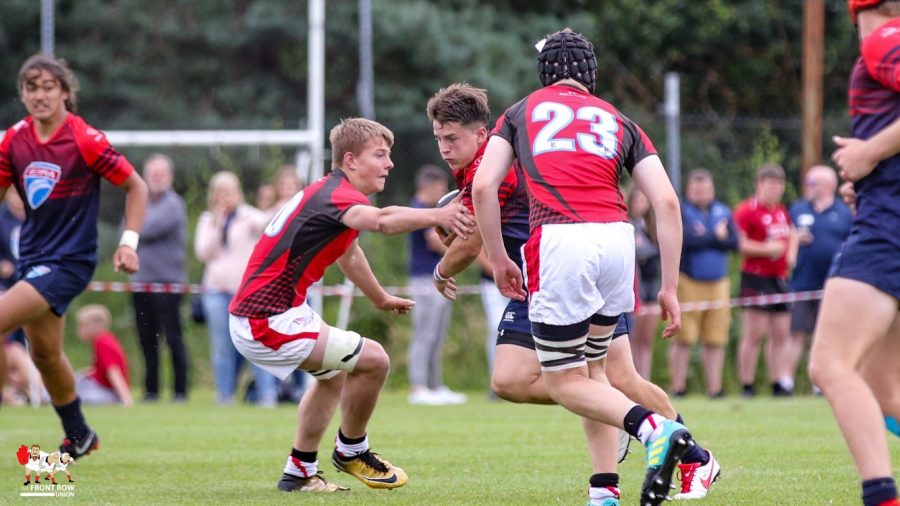 Ever since joining the North Bay Rugby team in eighth grade, senior JT Dyer has used his raw talent and hard work to establish himself as a dominant force on the field. Switching to San Francisco Golden Gate Rugby (SFGG) in high school, JT played on the Varsity B team his freshmen and sophomore years, and has been the Varsity A team captain for his junior and senior seasons. After years of dedication and training, JT will be attending Brown University in the fall, which is considered to be one of the most competitive colleges in the U.S. JT’s academic and athletic success was not achieved with ease, as he has worked intensely to improve his game and his grades throughout the past four years.

“As I’ve progressed, I’ve really started to focus on my craft and get much better around the rules and the fine aspects of the game … Just working on a lot of the skills that other kids aren’t willing to work on,” JT said.

After attending Brown, Dyer plans on joining the Reserve Officers’ Training Corps (ROTC) in hopes of joining the U.S. Navy. Both of JT’s grandfathers served when they were younger, one in the ROTC Air Force and the other in the Navy during World War II. JT expects that Brown will be a great place to showcase his talent and set himself up for future endeavors.

“It’s a goal of mine to try and eventually become a Navy Seal, so I had wanted to go to the Naval Academy really badly.They have a great rugby team, a great culture and a really tight knit community,” JT said. “After visiting Brown, talking to the coach and meeting some of the guys there, I realized that Brown has a similar type of environment and it’s also obviously a really good education.”

His rugby skills were not the sole reason for his acceptance into Brown, as JT had to pass the first round of academic applications. JT’s dad, Rob Dyer, credits his persistence and desire to improve as main reasons for his success on and off the field.

“He’s a very well-rounded individual who takes all aspects of his life very seriously … With all the sports he was playing, going to trainers and taking a big load of [Advanced Placement Classes] , there was a lot of homework,” Rob said. “[It meant] making sure he had time to do that and providing the backup that he needed, and he took that very seriously. He worked just as hard on his academics as he did on his sports.”

As a lifelong athlete, rugby was not always the only sport JT played in high school. He played baseball until sophomore year and football until junior year, but decided it was best for his health and training to focus solely on rugby for senior year. His rugby coach, Tony Wells, saw JT’s potential years ago, as he displayed his prowess by excelling in practice and games.

“When he was a sophomore, he scorched my senior guy at practice on a back line move, and I was like ‘woah who’s this kid?’ It was a big kid and JT just went right around him,” Wells said.

Whether it was juking upperclassmen or being a team leader, Wells believes that JT has some of the best attributes of a great rugby player, outlining his unparalleled work ethic.

“He’s got good leadership skills, he’s very hard-nosed, he trains extremely hard and he’s one of those unique players you get at that age that don’t come along too often,” Wells said. “He’s very driven.”

Similar to JT’s coach, Rob emphasized his son’s ability to be disciplined in his training and time management, as he is often awake far earlier than most to keep himself prepared.

“If you talked to any of his coaches or any of his trainers, [you will know that] nobody outworks JT. He is the hardest working person his age I’ve ever seen, and he is tireless in making sure that he’s prepared,” Rob said. “This morning he was up at 5:30 a.m., waking up to go train and making sure that he was going to be ready when they go to the national tournament.”

JT will carry his work ethic and preparation with him into college at Brown, gaining new experience and knowledge in a different environment. His eagerness to get to work with his new team and his desire to propel them to the top will make him an impressive addition to the Brown rugby program from the moment he enters campus.

“I’m most excited about playing against Dartmouth, they’re the number one rival in the Ivy League for Brown, and they’ve had a strong showing in the past decade,” JT said. “I’m really excited about going there and trying to be the Ivy League champion at Brown for rugby.”