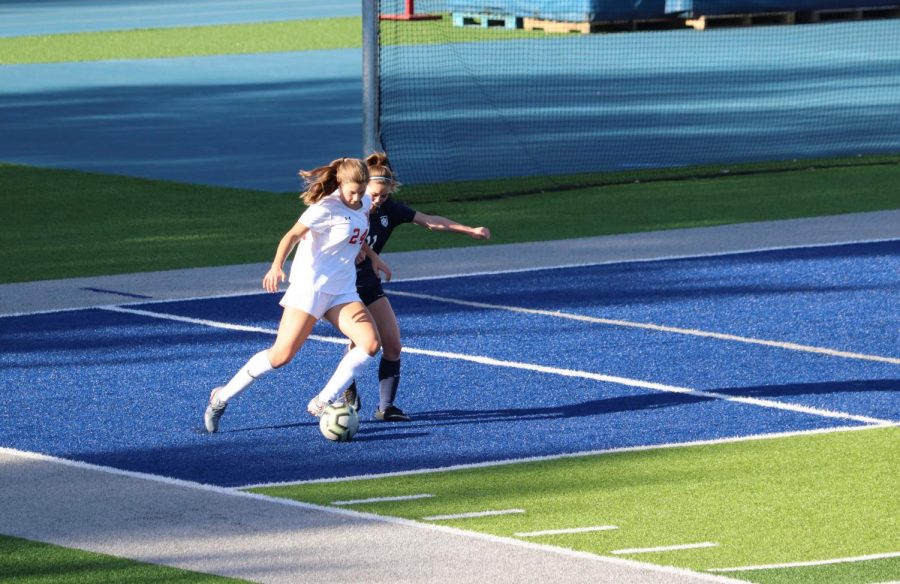 After working hard to get back in shape for her senior season, Watridge was elected co-captain of the girls’ varsity soccer team.

“I just have a lot of fun playing soccer. It just makes me happy every time I step onto the field. Even if I’m really tired, I just get excited to play because it’s just such a fun game, and each game is different,” senior and New York University (NYU) soccer commit Shannon Watridge said.

Watridge is the co-captain of the girls’ varsity soccer team and has been playing soccer since she was five years old, the age at which she found her love for the sport. Before making the varsity team as a freshman, Watridge played on the Marin Football Club and the Olympic Development Team. In her four years on varsity, Watridge has achieved an immense amount, including being awarded North Coast Section Freshman of the Year in 2018. To further her future with soccer, Watridge committed to NYU to play Division III Soccer last fall, a goal she had had since middle school.

“I’m really proud of myself for sticking it out through the whole recruiting process. It’s been really mentally taxing because I’ve been thinking about colleges since eighth grade, whereas most people start thinking about it in junior year. I’m really happy that it worked out for me in the end,” Watridge said.

This season, Watridge leads the Marin County Athletic League in points with three goals and four assists. She was chosen to lead the Redwood team as varsity captain, alongside senior Maya Rembrandt, who Watridge has played with since she was nine years old. Having played with Watridge for so long, Rembrandt has watched Watridge grow as a player, settle into her role as captain and become more assertive on and off the field.

“Our position requires you to be creative and risky with the ball and definitely just [have] a lot of confidence meaning taking players on and taking shots. [Watridge] was a little more hesitant when we were younger and was more the behind-the-scenes player … but now she’s gotten more confident and is taking chances and taking players on,” Rembrandt said.

In the past year, COVID-19 posed a challenge to every sport. For soccer, the team could not play contact, which was hard for Watridge because she was out of practice with being aggressive on the field.

“I think after COVID-19, it’s been a little bit hard to get my soccer legs back and in the same place that I was before COVID-19, especially since we literally couldn’t play contact for 11 months,” Watridge said. “It was so exciting to get back on the field and tackle people, but figuring out how to keep the ball away from [defenders] when I’m dribbling or passing … was really challenging [during COVID-19].”

Even with the extra hurdles brought by COVID-19 to the team, Watridge and Rembrandt have been able to complement each others’ strengths as co-captains.

“She’s not necessarily the loudest and the most vocal leader, but she’s the sweetest person ever. I think that makes her not intimidating for freshmen and young people to approach … the underclassmen are more comfortable approaching her and talking to her about problems they’re having with a coach or with other teammates,” Rembrandt said.

While she leads her team to success on the field, being captain has helped her improve her confidence and leadership skills.

“Sometimes I struggle with being loud on the field and having a big presence in terms of leadership, so I’m trying to work on that more on the field and be louder and more vocal with my teammates. I remember when I was a freshman, all the seniors were pretty loud and scary; I don’t want to be scary, I just want to be more of a captain figure,” Watridge said.