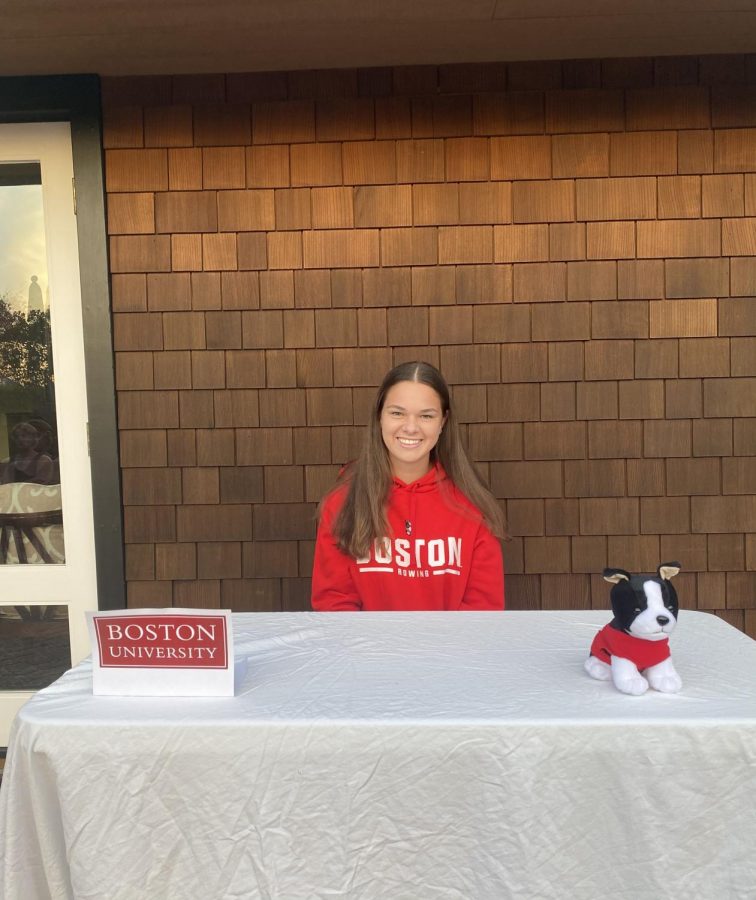 After beginning the recruiting process her sophomore year, Smith committed to Boston University in December 2020.

“I wasn’t noticed at the top of the team in the beginning, then one day my coach pulled me aside and she [said], ‘I have my eye on you,’ because I was starting to do well, and I had no idea. So I [said], ‘Wow, I didn’t realize I could actually be good at this sport,’” Boston University lightweight rowing commit Lulu Smith said.

Despite Smith’s initial hesitation as she began rowing in her sophomore year, hours of hard work and dedication allowed her to grow as an athlete over her three years on the Marin Rowing Association (MRA) team. After attending a rowing camp in 2018, Smith discovered a love for rowing and has been a committed member of the MRA lightweight boat (for smaller rowers) ever since.

Smith’s team has been incredibly successful in the years they have been able to compete, her novice boat placing first at the San Diego Crew classic. In 2019, Smith and her novice boat won the gold medal at their 2019 Youth Nationals, a competition with over 400 boats competing.

Junior Ciara Auran, who has known Smith since elementary school and has competed with her for the past three years, witnessed Smith excel as both a rower and a teammate.

“[Smith is] such a hard-working person. She’s someone who everybody would want in their boat because you know that she’s going to be giving everything she’s got. She’s super dependable, calm under pressure and she’ll always give you words of wisdom or words of inspiration if you need them,” Auran said.

All the work Smith put into rowing paid off when she committed to Boston University, one of the top three lightweight rowing schools in the country. In addition to her tenacity, Auran has also seen Smith exhibit leadership skills and always provides support toward her teammates during every practice.

“I don’t think I could have gotten through some of our races without her there … she’s just a constant reminder [that], ‘We’re in this together, we’re all doing this together,’” Auran said. “There’s a sense of ease that comes when she’s in the boat … it’s really, really inspiring to see how hard that girl is pushing. [It makes me think], ‘I’m gonna push that hard too.’”

Despite the relief of an early commitment, it was a strenuous process for Smith to reach the necessary athletic level she needed to row collegiately. Even with COVID-19 bringing the 2019-2020 rowing season to a halt, Smith was ready to put in the work needed to continue rowing for the next four years in Boston.

“The start of this past season was just really hard because I had not done well over the summer. I ended up being able to work my way back up, and I’m very proud of where I stand right now,” Smith said.