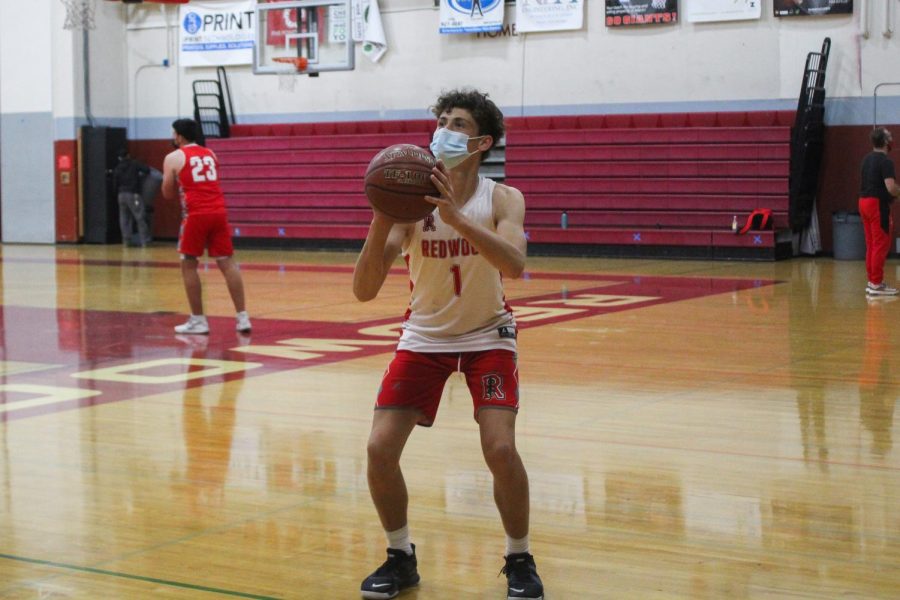 At the end of middle school, multi-sport athletes face a choice: which sport will they pursue competitively moving forward? Frequent training and time demands make it difficult to play more than one sport at the high school level, and few student athletes have what it takes to excel at multiple sports. For freshman Jake Vasquez, this is not an issue. This year, playing varsity lacrosse, varsity basketball and junior varsity football, Jake has continued to dominate in three sports.

Jake was raised in a sports-heavy environment. With both parents being athletes and fans themselves, Jake was immersed early on in the sports culture and dove into every sport to which he was introduced. Thanks to his dad, Kevin Vasquez, Jake immediately took to lacrosse in third grade, falling in love with the contact element of the sport.

“My dad played [lacrosse] at a really high level. I took his passion for it … I just took it by charge and it was awesome,” Jake said.

Given his enthusiasm, one lacrosse team is not enough for Jake. He plays for three competitive teams: Alcatraz Outlaws, West Coast Stars and now, Redwood varsity. For most of his club lacrosse journey, Jake has been placed at a higher level, playing with kids at least two years older. While it was intimidating for Jake at first, his dad feels that Jake has always taken an effective approach when playing with older kids.

“[Jake] doesn’t try to be too demonstrative, but he just kind of plays a role. Once you substantiate that role in the minds of the older players, they realize that you’re good enough to be there, then you can gradually start doing more and more,” Vasquez said.

“He’s used to being a leader, and right now he’s not the oldest guy on the team. It’s fun to watch him watch the seniors and juniors. … I mean, he’s crushing it as a freshman,” Atkins said. “It’s impressive.”

Jake’s learning curve as a freshman on varsity lacrosse is supported by his ability to incorporate assets from basketball and football.

“I get skills from basketball that I translate into lacrosse, and I use the skills that I learn from lacrosse in basketball. It really helps my game IQ,” Jake said.

Atkins also highlights how playing multiple sports at such a competitive level has positively contributed to Jake’s athletic spacial awareness.

“I think Jake’s biggest advantage is being able to understand the spacing, and he has the athletic IQ [which] only comes from playing multiple sports. Certainly lacrosse players can be very gifted at lacrosse, but if they don’t know how to execute a pick and roll in basketball or routes in football, they’re going to limit what they’re able to do in sports. Jake just has a knack for all three [sports],” Atkins said.

Of course, Jake’s success has not come solely from his participation in multiple sports. Kevin highlights the intense and committed training process Jake undertook during the pandemic in order to prepare for the beginning of his high school career.

“Jake made a conscious decision that he was going to try to play three sports in high school. He was going to play football, basketball and lacrosse, and be the best at all of those … So, during the pandemic, the first four to six months, he set a goal, and he took 300 basketball shots a day,” Kevin said. “[Then] he switched gears, and he did the same thing for lacrosse. He took 300 shots a day in lacrosse, and he did that for the next four to six months.”

This level of intensity in practice and commitment sometimes takes a toll on an athlete’s mental and physical stamina. Luckily for Jake, his coaches and parents have ensured that he keeps a healthy balance between his athletic and academic endeavors.

“I put just the right amount of pressure on him to … encourage him, but also not put too much [pressure] that he wants to quit the sport. That was a big thing for me as a parent, having been an athlete growing up. … I wanted [my kids] to love sports and get everything out of it, but I didn’t want them to get burnt out. I think I played a role in his life trying to just teach him the sports … and let him find the love and joy,” Kevin said.

Jake has surely found love for his sports. Despite his chaotic schedule and the many demands of being a student and competitive athlete, he remains committed.

“Even though I may go to two practices a day, back to back, and they’re getting really tiring … It’s always just going to be more fun than stressful,” Jake said.

COVID-19 forced many high school sports into the same season, complicating Jake’s ability to pursue his three sports across two shortened seasons. Even for a talented and dedicated athlete, the constant games and practices can be exhausting.

“He would just want to go like a puppy dog, just keep playing and playing until he’s just wiped out. So that’s when sometimes I did have to step in and say, ‘Wait, we need to make sure you’re physically and mentally healthy. You’re playing with a high level team and high level players.’ There would be times where we would hold out on practices and just make sure that he was fine and his body was recuperating properly and mentally,” Kevin said.

Despite his significant success and accolades, Jake appears to remain grounded.

“What I love about Jake is his combination of hard work and being humble. If you’re sitting in a conversation with Jake, you’re probably never going to have any idea that he has had this type of success in sports throughout his career,” Kevin said. “That not only makes him a good person, but I also think it makes him a better athlete because he continues to strive.”