2021: The year we do hot girl summer justice 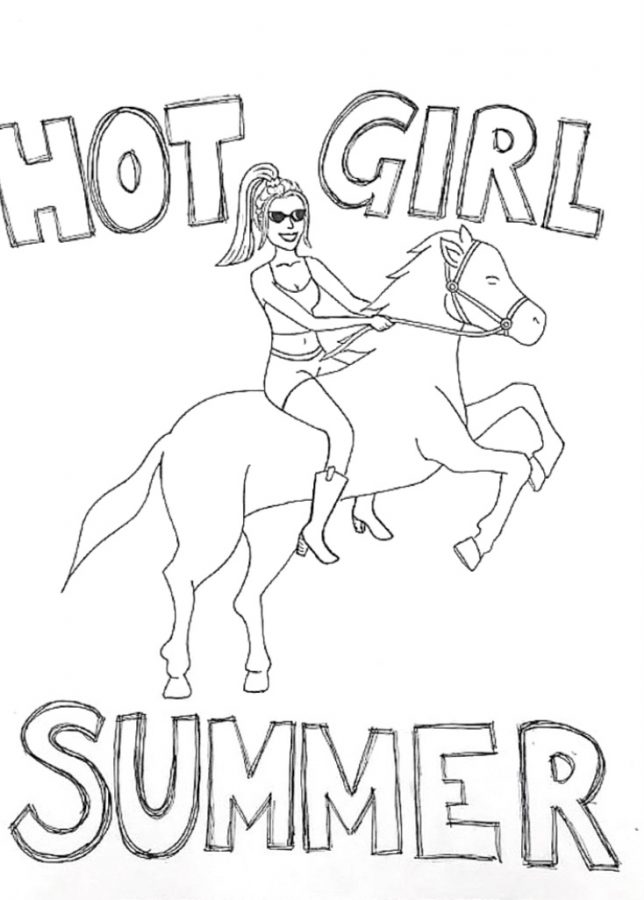 Unless you’ve been living under a rock for the past two years, you’ve probably heard the phrase “hot girl summer” used in some form or another.

2019 was a summer to remember. While saying “okay boomer,” singing “Old Town Road” and liking an egg’s picture on Instagram became all the rage, something else emerged from the depths of the internet –– hot girl summer. While most of the trends of 2019 fizzled away with the season, hot girl summer has made a fiery comeback every year since.

The term was coined by global music sensation, Megan Thee Stallion, whose rise in popularity during the summer of 2019 began to influence the vocabulary of many young adults and teens. As Megan Thee Stallion herself defines it on Twitter, “Being a Hot Girl is about being unapologetically YOU, having fun, being confident, living YOUR truth, being the life of the party.”

Hot girl summer was created to empower, endorse fun and encourage freedom. It doesn’t tell women to do anything in particular; it just tells us to do what we want, a sentiment not heard enough in society. This is partially why the phrase gained so much traction.

Just in July 2019 “hot girl summer” had been used on Twitter a whopping two million times. In August 2019, the song “Hot Girl Summer” by Megan Thee Stallion featuring Nicki Minaj and Ty Dolla $ign was released. Since then, the term has been used frequently in TikTok hashtags, songs, Instagram captions, Twitter threads, Facebook statuses, merchandise and Twitter bios. Furthermore,  in a world where Black artists have historically been leaders in creating the culture yet rarely receive the credit, in September 2019, Megan Thee Stallion made history by officially trademarking the phrase.

Just like that, the fanbase title-made, meme-made movement, found a way to truly influence the summers of teens and young adults around the world, regardless of familiarity with Megan Thee Stallion or the origin of the hot girl summer movement.

While the internet became flooded with various interpretations as to what a hot girl summer entailed, I watched as a set of standards took form for my peers and I, standards that were strangely contradictory to the intent of the movement. Reflecting on the past summers, junior Ava Lazarus has also taken note of Marin’s attitude towards hot girl summer.

“In the summer especially, there are certain beauty standards that so many girls are trying to [meet]. I think that’s what some people perceive hot girl summer as, especially in Marin,” said Lazarus.

For a lot of Redwood students, it seems that hot girl summer has manifested itself in a strangely pressuring and controversial form over the past few years. Through expensive glow-up YouTube tutorials, weight loss programs and even hook up competitions with point systems, for many, hot girl summer has become warped with beauty standards and unnecessary pressure.

But being your authentic self is all about how you choose to define it. There is no standard to what makes a hot girl summer; it doesn’t need to have anything to do with “body count” (the amount of people an individual has had sex with), how you navigate your relationship with your sexuality or the degree to which you match beauty standards.

The word “hot” in hot girl summer holds the liberation of owning your unique assets that make you the most confident. Many people know what a “hot girl” looks like in a traditional sense, of course, but the joy of hot girl summer is that it’s inclusive. It doesn’t come with any size, age, ability or gender limitations; everyone is encouraged to love the skin that they are in.

But like most things on the internet, hot girl summer has received its fair share of criticism. In a TikTok with almost 200,000 likes, Trey Lander states, “Hot girl summer doesn’t exist, if you’re a hoe just say that.” And on twitter, many users post tweets like, “So girls are gonna be sluts and call it hot girl summer…okay.” The stigma that hot girl summer is synonymous with self-degradation has become increasingly present, and unrightfully so. If sexual liberation is how one defines living their best life, there should be no shame in that.

In seeing that so many people (men especially), express their confusion as to what the movement even is, it’s interesting that despite their lack of knowledge on the topic, seeing happy women expressing themselves is just enough to express disdain and frustration. Though it’s quite disappointing, reactions to the hot girl summer movement are perfect examples of the subtle ways in which misogyny manifests itself. Who are we to judge someone else’s barometer of what living their best life looks like?