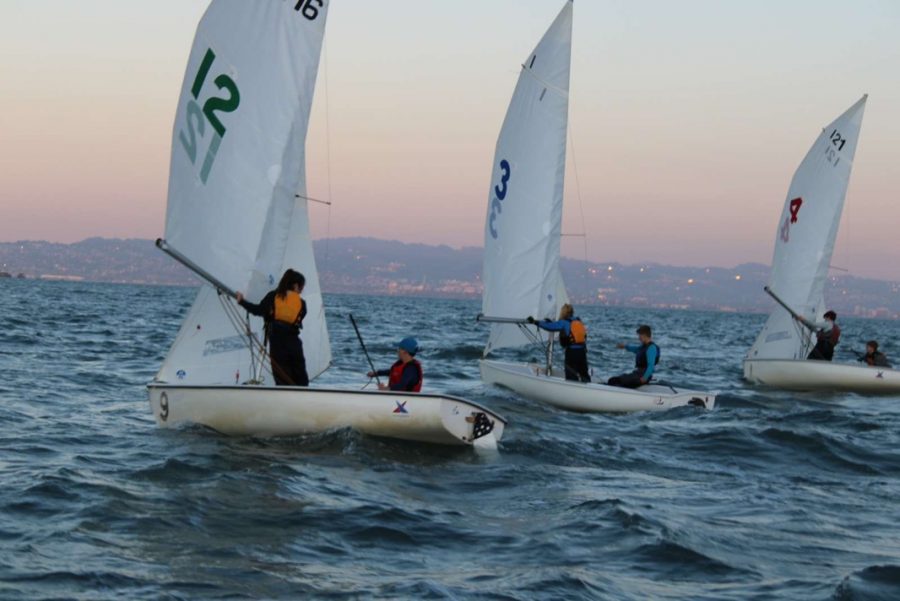 After nearly a year since the Redwood High School sailing team shut down due to COVID-19, the team is finally able to get back on the water at the San Francisco Yacht Club. Now, sailors must manage COVID-19 precautions as well as a cramped season to maintain their title as one of the best sailing teams in Northern California.

Due to the nationwide lockdown in March of 2020, athletes have had their seasons cut short. While some sports teams were able to start practicing at the beginning of the 2020-2021 school year, the Redwood sailing team was not. The team competes using Flying Juniors(FJ boats), which hold two people: one crew member and one skipper. The crew member looks out for the boat’s front, while the skipper has the most responsibility in steering the boat. Due to Marin County guidelines and the inability to remain six feet apart on the FJ’s, the sailing team was not cleared to begin practices while many other sports, such as football and tennis, were. Katie Norris, a junior on the team, mentions how frustrating it was to watch other sports go back to practices as early as last August, while sailing had to wait until late March.

Sailing is usually a two-season sport, starting in late September through mid-December and then coming back in late January until early May. Because the team has only now been cleared to begin practices, the season is far more cramped and frantic.

Lexi Sessions, another junior on the team, mentions how because of the short season, the team needs to focus on the tactics of sailing during practice.

“[Our coach] has been having us work on more tactical [drills during practice, as well as] boat handling skills. [This is] so that when we [can] race again [after only a short amount of practicing], we will be ready to compete at that [same level of racing as] kids in SOCAL have since they’ve had more time to practice than us,” she said.

Many teams from Southern California continued to practice during COVID-19 due to having different guidelines than Redwood High School’s which prohibited the team from practicing. Currently, the team is trying to get back on the level of their competitors.

Sessions notes how difficult it was for the team to watch kids not only in different sports as them but in the same sport continue to practice, while she could not.

Despite the many differences the team has faced during their practices, it is worth it to be able to go back on the water. The team has stringent COVID-19 guidelines such as temperature checks, mask-wearing and splitting the group into two cohorts to set up boats. Half the team will go on the dock at one time to set up their boats before getting out on the water, and then the other group will.

Junior Morgan Moseley, mentions another significant difference in the team’s practices, that they are not able to be inside together.

“Normally [after we finish sailing], we would go into a classroom and have debriefs. This year we do that online,” Moseley said.

After sunset, the team will take apart the boats and then head home, where they will debrief online.

Even though the current ways of practicing are not ideal, sailors are over the moon to get back to practicing the sport they love. Many team members have been sailing their whole lives and found it hard to have the joy previously received from the sport be taken away. They are very grateful to finally be able to continue the sport, even if it’s not the same.

“It is sort of [different returning to] the boats again, but we are just happy to be back!” Sessions said.