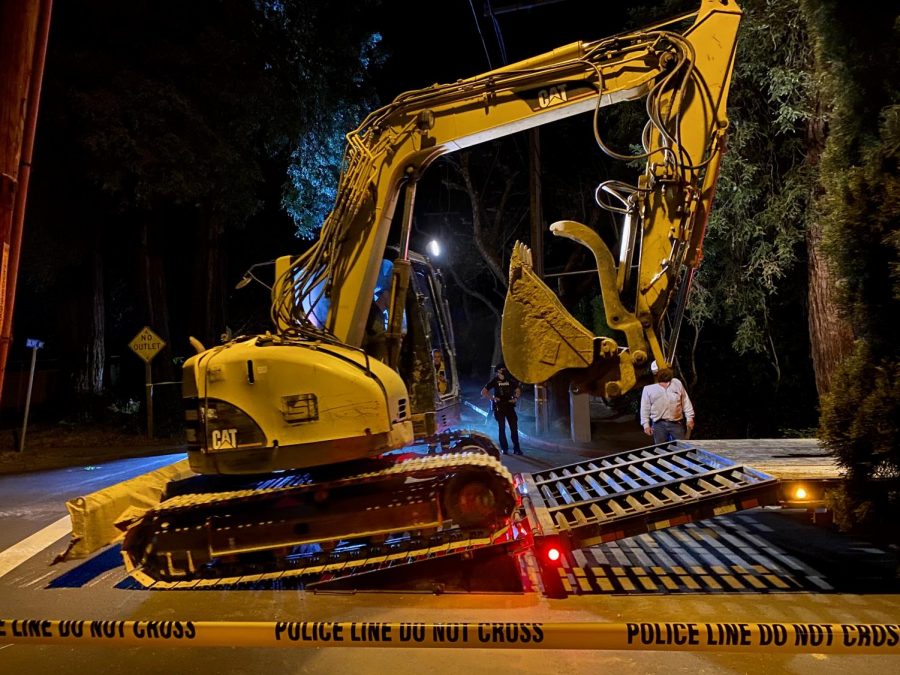 On April 29, 2021, at around 7 p.m., a GMC pickup truck pulling a flatbed with a backhoe, a piece of excavating equipment, got stuck trying to make a turn on Madrone Ave. and completely blocked the roadway until around 11 p.m. Many Redwood students live on Madrone Ave., located in Baltimore Canyon off of Magnolia Ave. in Larkspur, and struggled through this inconvenience. For Baltimore Canyon residents, this roadblock blocked the entrance and exit of the canyon, forcing homeowners to park on either side of the truck and walk to their destination.

Doug Mowbray, a Madrone Ave. resident and parent of a Redwood alum, graciously opened the front gates of his yard to allow pedestrians to cross around the police tape and pickup truck blocking the sidewalk.

“The driver picked up [the backhoe] over on Orange Ave. somewhere, but he made a wrong turn, went over the curb and popped the tires,” Mowbray said. “Other than the inconvenience, it has just been entertaining watching it all, having some action for once in this area.”

Rachel Hendrickson, the girlfriend of the equipment broker responsible for the exchange of the backhoe, explained the background of this equipment.

“This is a deal where there is a seller of a piece of equipment here in Larkspur who included Charlie, who is an equipment broker, and sold this piece to a buyer in Portland Ore.,” Hendrickson said. “The driver was just a transporter who got lost.”

Dan Reese, Battalion Chief of the Central Marin Fire Department, explains that immediate action to remove the truck and piece of equipment out of the road was necessary because there would be no way out in the case of a medical emergency or an evacuation.

“The fire department decided, since we couldn’t get any responders up past the roadblock, to stage some medical equipment so if something were to happen we could get up there,” Reese said.

This event sparked an extremely prominent and ongoing concern that many Baltimore Canyon residents have regarding the one entrance/exit which limits evacuation safety.

Baltimore Canyon resident Elizabeth Gravely expresses there have been several other examples in the canyon of not only road obstructions, but lack of warning to the residents to prepare them. Baltimore Canyon has an emergency response system through the Neighborhood Response Group (NRG), however, in this incident, there was no communication to residents who live further up the canyon.

“My concern is that there is a lack of communication between these construction projects and the city, especially with those large trucks and the narrow roads of the canyon,” Gravely said. “If a truck gets stuck, just like in this situation, a firetruck cannot get up this hill. There needs to be some sort of oversight, especially if they are going to do more development up here.”