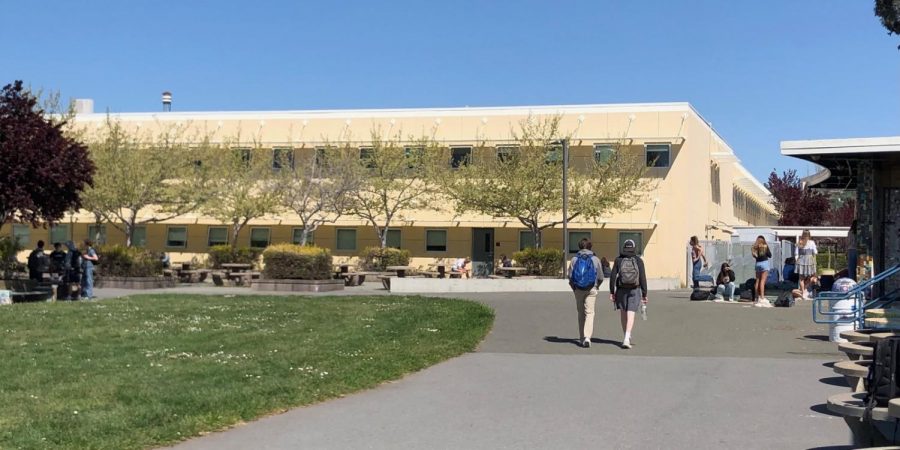 On March 29, the Centers for Disease Control and Prevention (CDC) director, Rochelle Walensky, gave a grim yet hopeful speech at a White House COVID-19 briefing. Walensky urged Americans to continue practicing strict COVID-19 precautions and warned of a possible fourth wave, and said she had a “recurring feeling… of impending doom.” Walensky voiced her concerns on the recent spike in coronavirus cases, noting a 10 percent increase over the past week, compared to the prior. In addition, there was a spike in COVID-19 deaths and hospitalizations this week.

Redwood had previously announced its return to 100 percent capacity in-person learning but some teachers and students have concerns over safety.

However, Walensky had an optimistic view on Americans’ ability to end the pandemic by taking necessary precautions. She mentioned that the United States is predicted to experience another large wave in cases, similar to many European nations.

“We must work together now to prevent a fourth surge,” Walensky said.

As well, in an interview on The Rachel Maddow Show, Walensky pointed out that the surge in deaths will be among younger people because most older people are vaccinated.

“The CDC warned that there’s probably going to be another surge…I’m scared. I am worried about [students] because they aren’t vaccinated,” said Kristal. “The pandemic is not over. The CDC said that numbers are surging… I’m looking towards the experts right now, and I’m curious why we’re not listening to them.”

Kristal also believes that the two-cohort plan sounded “really desirable” and wishes that the community was more involved in the decision to reopen Redwood.

“I feel like this is a community choice, so all members of the community should have been involved in making this choice and they were not,” Kristal said.

Redwood social issues teacher Nikolai Butkevich raises similar concerns and is confused as to how the school plans to keep students safe.

“I’m looking at 20 desks right now, and I’m wondering how the other 14 are going to be put into this room while maintaining three feet of distance. I only see space for seven more desks, but I’d be happy to be proven wrong,” Butkevich said.

Butkevich and Kristal also have concerns about having in-person seven period days on Mondays rather than the usual Monday at-home schedule.

“What I worry about are the hallways. Having seven transitions in one day…and then giving [students] a lot of time between those classes; that’s a recipe for kids to start bunching up and socializing in the hall,” Butkevich said.

Kristal foresees issues with keeping a sanitary classroom with so many class periods and students.

“I’m going to see all of my students in one day, which is having at least 180 bodies through my classroom. That sounds unsafe,” Kristal said.

Redwood senior Joshua Cooper also has concerns about the safety of returning.

“I am befuddled at the choice [to reopen schools fully],” Cooper said. “To say we’re going to reopen before people can get vaccinated at this point doesn’t make sense.”

Cooper predicts that Redwood students will not stick to CDC guidelines.

“There’s no way you’re getting 100 percent compliance. To maintain that three feet number means that we have to have a high level of compliance and if that doesn’t happen, then that’s a danger. It’s a risk,” said Cooper.

However, others have no concern with going back full time. Substitute teacher and Redwood mother, Jennifer Green, has spoken out at board meetings to encourage full return.

“I am not concerned at all. I wouldn’t have been, even without the vaccine, because of all the precautions that are being taken.” Green said.

Green also feels safe sending her children to Redwood, because she believes the school is taking all necessary precautions. She stated that everyone who works at Redwood will be vaccinated when Redwood fully reopens.

“The stronger fear I have is the social and emotional impacts of this shut down on kids,” Green said.

For these reasons, along with scientific data suggesting that schools do not contribute to COVID-19 spread, Green feels that fully reopening Redwood “is absolutely the best plan at this point in time.”

Redwood is to reopen at 100 percent capacity on April 13. Redwood remains confident in their ability to maintain strict COVID-19 guidelines and will continue their health screenings and mask requirements.