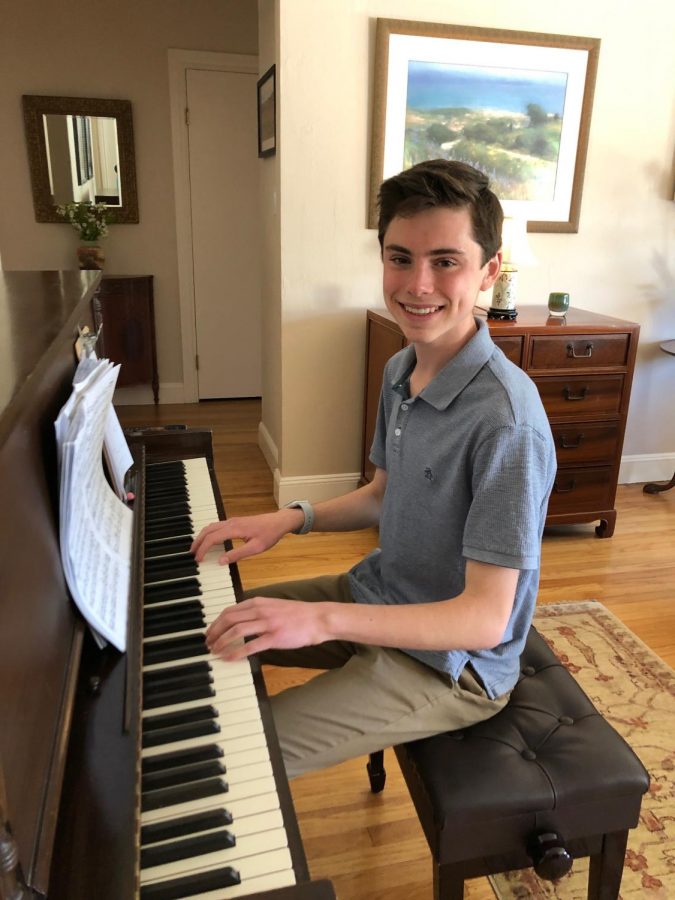 “[Playing the piano] reduces my stress levels and allows me to escape from everything. I feel like music has really profound effects on people. My goal for the club is to [lift the spirits of]  people who are down and not doing great,” Geloso said.

The new Pianos for Hope club, founded by sophomore Michael Geloso, is organizing fundraisers to raise money to purchase pianos and keyboards, which will then be donated to nursing homes and hospitals. These instruments would give patients and residents a creative outlet and allow those visiting hospitals and nursing homes a chance to play for their loved ones. With the donations, the club would also provide resources for music therapy programs, the therapeutic use of music to accomplish non-musical goals such as emotional, cognitive and physical recovery.

Geloso was inspired to start the club when he first witnessed the impacts of music therapy on 94-year-old Rosalie Courreges,  a family friend who used to play piano but stopped due to her arthritis. Although Courreges is healthy, according to Geloso, she doesn’t have many close family members left. Whenever Geloso visits her, he plays a few songs for her on the piano, which seem to make her happier.

“We always notice that her mood really changes [when I play her songs]. She becomes a different person. She becomes so much more positive and upbeat,” Geloso said. “I think it takes away some of her loneliness and her worries.”

Like Geloso, Vice President and Co-founder Sam Andre and Secretary Isabella Kraus both play piano and have observed its emotional effects. After Geloso came to him with the idea, Andre was enthusiastic about starting the club because he relates to feeling his mood improve after playing piano.

“I sometimes play piano when I’m feeling down. If I were in the hospital, I’d like to have that option,” Andre said. “If you’re staying in a hospital, you’re going through a really tough time. We just want to make their lives a little less tough.”

Kraus also feels very close to the cause, as she has played the piano for relatives in nursing homes and seen the effects of music firsthand.

“[Piano] brings so much hope. It really lifts the mood and spirits of the people there. Providing that hope is a really good feeling inside and I love seeing those smiles on people’s faces,” Kraus said.

The Pianos for Hope club is currently communicating with the music therapy department of University of California, San

Francisco (UCSF) Children’s Benioff Hospital to coordinate the specifics of donating electric keyboards to their program.

Brianna Negrete, a professional music therapist at the UCSF Children’s Benioff Hospital, has seen a wide range of music therapy’s beneficial effects. According to Negrete, music can help normalize an otherwise scary and abnormal hospital setting, ease pain and provide patients with a creative outlet. Additionally, co-treatment programs that pair music therapy with other treatments, such as speech and standing therapy, can make the recovery process easier.

“We can utilize music in order to help motivate children or teenagers to engage in therapy,” Negrete said. “[This could mean] playing drums, walking [towards] something that’s enticing [in order to work on walking goals] or having them stand and play guitar or keyboard. So they’re working on those standing [and other physical therapy] goals, but still playing music to help support that.”

However, according to Negrete, in order to stay safe during the pandemic, the hospital’s instruments are now restricted to single-use. This has reduced their resources and made donations more important than ever to ensure the program helps as many people as possible.

Pianos for Hope is currently brainstorming and planning methods of raising money to purchase pianos and keyboards. Their ideas include a GoFundMe or a socially-distanced bake sale during which members would drop baked goods off at customers’ houses. The club is also considering organizing virtual piano recitals where musicians would perform in Zoom meetings that audience members would pay to attend.

Geloso, Andre and Kraus are excited to make an impact with music and create real change with their fundraising efforts.

“[Donations] will help our program in an immeasurable way because we’re able to provide keyboards to patients that maybe wouldn’t be able to ever have something like this before. That’s huge, especially if it’s also something they can take home and utilize in their own environment,” Negrete said. “Using that creative outlet of expression and coping mechanism at home is really important.

Donations to the Pianos For Hope’s GoFundMe can be made at this link: