Construction ramps up as Fairfax welcomes a new skatepark 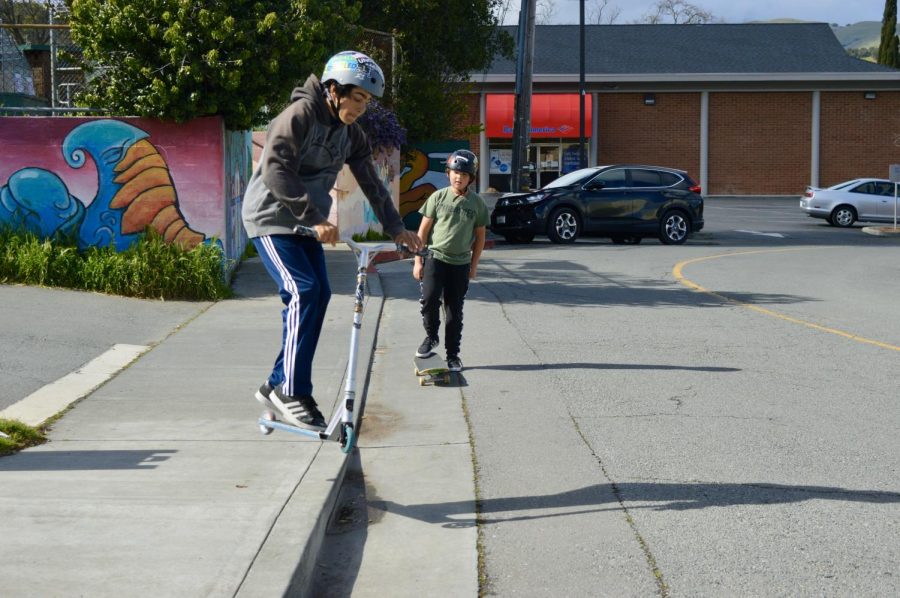 Scootering and skateboarding after school, two Fairfax boys look forward to having a designated space to do their sport that is off the road.

After months of accumulating community support and scouting for a location, the town of Fairfax will welcome a temporary skatepark in the Fairfax Pavilion parking lot on Bank Street. The community-funded project, led by the Skatepark 4 Fairfax committee, surpassed its $30,000 fundraising goal days before beginning construction on Mar. 1. The park is expected to open in early April.

While Marin skaters cannot wait to get their wheels rolling on the new ramps, the passionate volunteers that founded the Skatepark 4 Fairfax committee have been advocating to make the skatepark possible since December. Vice Mayor of Fairfax and Redwood alumnus Stephanie Hellman first encountered the strong community interest in building a skatepark on her 2020 campaign trail.

“When I was running for office and campaigning door-to-door, six or seven times people said to me, ‘Fairfax needs a skatepark. Are you supportive of this?’” Hellman said. “I kept hearing this over and over again, and once you hear something like that six or seven times, it becomes a trend.”

Following her election, Hellman returned to the community members who had requested a skatepark and put together a team of volunteers to bring their aspirations to reality. Fairfax local and lifelong skater Steven Teijeiro was eager to get involved. From engaging with community members on numerous social media platforms to presenting at town council meetings, Teijeiro played a major role in gaining approval for the skatepark.

“I have been a leader within the committee,” Teijeiro said. “My leadership style has always been to really listen closely to what our team members are feeling and the thoughts that they are having and strategize with them about the steps we should take and how we plan to get things done.”

For Teijeiro, a new skatepark means more than creating a space for those already involved in the sport. He views skateboarding as an opportunity for youth to challenge themselves and learn to take responsible risks, a vital aspect of childhood development.

“If we can expose kids to a healthy level of risk in a healthy environment where they are really able to choose what it is they want to do and how far they want to push the edge, these kids will be much more prepared for the greater world,” Teijeiro said.

Whether it is on a skateboard, scooter, or roller blades, Teijeiro believes that skateparks encourage youth to be daring and confident in the risks they take, which he views as an unusual opportunity given how safety-oriented much of modern childhood has become.

“It is so beneficial to our community to have self-conscious kids, not in an insecure way, but in a confident way, that know the limits of what it is they want to do and really get into life,” Teijeiro said. “They are really alive out there.”

No longer an after-school activity stereotypically claimed by party animals and druggies, skateboarding has gained popularity in recent years as a professional sport and was set to debut at the canceled Summer 2020 Tokyo Olympics.

Class of 2020 Redwood graduate Pato Harris skateboards constantly and is excited to have another spot to practice his sport, especially given the rise in crowds at skateparks he has witnessed since the pandemic began.

While Harris attended several town council meetings and advocated for the skatepark’s approval, the Skatepark 4 Fairfax committee worked on fundraising the $30,000 needed to build the park communally. Within a few weeks, the committee exceeded their target dollar amount without receiving a dime from the town of Fairfax and are continuing to see those numbers increase as excited local businesses and restaurants donate proceeds to the park. Hellman attributes their success to the passion in the Fairfax community.

“Fairfax has a very small budget, so I think our fundraising shows that when there’s a will, there’s a way,” Hellman said. “The town belongs to the community, and this project bubbled up from community demand, and it is so exciting that it is coming to fruition. We are so delighted that both the residents and small businesses are behind it, and we can support the kids in this meaningful way.”

Once the park is open to the public, finding a permanent location is the committee’s top priority. The Parks and Recreation Commission is currently exploring sites and plans to report back to the city council in July. In the meantime, Fairfax residents and Marin’s thriving skateboarding community are excited for the construction to finish, with many even lending a hand to help out with the building. Advocates for the park, like Teijeiro, are hoping to see the community’s efforts pay off with a popular skatepark in April.