A student’s view: the first month back in hybrid system learning 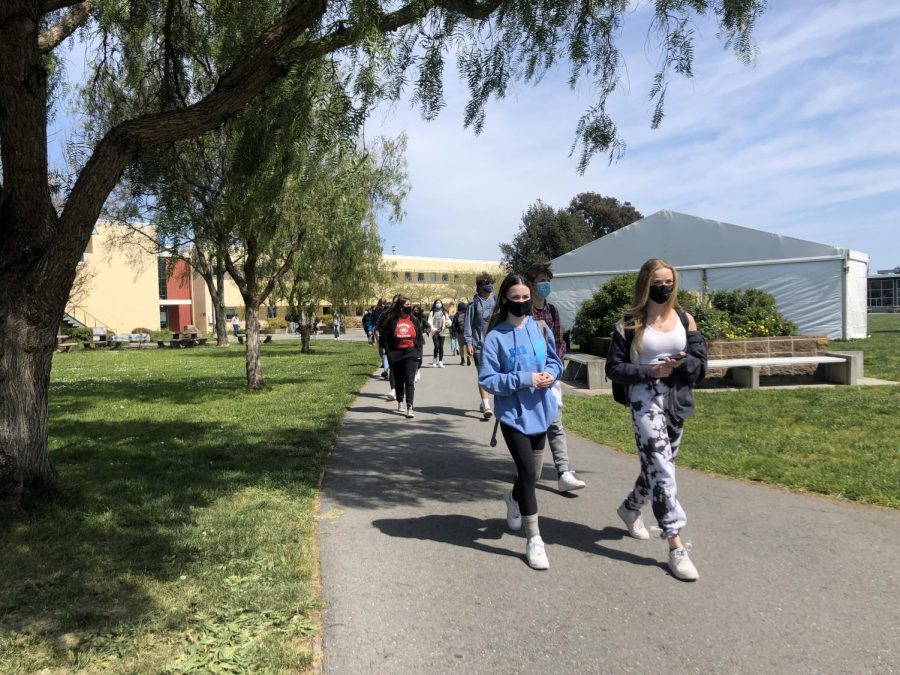 March 2 marked the first day of Redwood’s hybrid learning system, a schedule that allows students to learn in-person while being COVID-19 safe. After splitting the student population into three cohorts based on last name, students were scheduled to attend in-person classes for one or two days a week. On March 23, Redwood announced that they plan on returning from spring break with full student capacity for those who choose to come back. Students are able to continue online learning, but if they select the in-person option, they must attend all classes on campus. Though there has been a change in how many students can attend school, there are still several safety protocols in place to ensure the safety of students and staff alike. Redwood has implemented protocols such as mandatory mask use, social distancing and daily health screeners.

Before attending in-person school, many students had questions about the hybrid learning system, as it was the student body’s first time back on campus since March of 2020. Incoming freshmen were bound to have an unforgettable first day of high school, while seniors were determined to experience their last few days with classmates.

Like many of her peers, freshman Charlotte Fishburne did not know what to expect from her first day at Redwood. Fishburne attended Ross School, a K-8 school with almost 400 students – drastically different from Redwood’s student population of about 2,000 students. Due to Fishburne’s limited experience in a large school, she was eager to expand her social horizons and meet new classmates at Redwood.

“I chose [to participate in] the hybrid system mainly because, being a freshman on Zoom, it’s hard to get to know other people, so I wanted to get to know my classmates more,” Fishburne said.

By returning to school, Fishburne was able to accomplish her goal of meeting new people. Additionally, Fishburne enjoyed the change from online social interactions to in-person connections.

“It was nice to meet people [in person] that I have already gotten to know on Zoom, but now I can actually see them in-person and have real conversations instead of just being in breakout rooms,” Fishburne said.

Sophomore Jack Haubold chose the hybrid learning system because he missed being in class on campus around students and staff alike.

“I have been desperately missing in-person school. I do not enjoy Zoom at all,” Haubold said. “I also really wanted to see people, especially my teachers.”

Though Haubold was eager to be on campus, he was also concerned about the health risks involved with returning to school. In addition, Haubold was unsure of how his in-person classes would work.

“I was lucky to get two days in my first week. On my first day I was kind of nervous, I didn’t know what to expect. I had P.E. first which wasn’t the best start just because it was weird walking around the tennis courts,” Haubold said.

“I felt like with online school, I wasn’t learning as [much] as I could have. I just wanted to be in a better environment for me to learn in,” Vasquez said.

Since being back in the classroom, Vasquez has been able to take full advantage of learning in-person. Now, Vasquez feels she is able to focus more with the in-class environment setting.

“I know at home I get distracted by my phone or by homework from another class, so being in class and absorbing all of the information without getting distracted was really helpful,” Vasquez said.

On the other hand, senior Lucas Wright had some bittersweet feelings about his first day back on campus with the hybrid system. Wright found it difficult to be enthusiastic, as it was a new and irregular first day on campus.

“It definitely just wasn’t the same, and it’s not ideal for senior year. It’s not the right circumstances to be having an exciting first day,” Wright said.

Though the hybrid system was not Wright’s perfect first day back at school, he knew that in order to focus better and fulfill his need for social interaction, that he should go back.

“I missed having those day-to-day connections with people and seeing people in the hallway as I walk from class-to-class. I am also a much better learner when I am in person and I am actually there with the teacher,” Wright said.

Redwood plans to abide by the Centers and Disease Control (CDC) organization’s new medical research and instruction of separation by three feet instead of six feet when all students return to in-person instruction following spring break. By April, Redwood will be able to reconstruct classrooms with more desks and chairs and additional nutritional services. Teachers will also have the ability  to be fully vaccinated. Going back to school, students will be able to interact with their class’ at full capacity. Though the hybrid system is not what most students had envisioned for this school year, many are still grateful for the experience of being back in the classroom and cannot wait to go back to learning with all of their classmates.