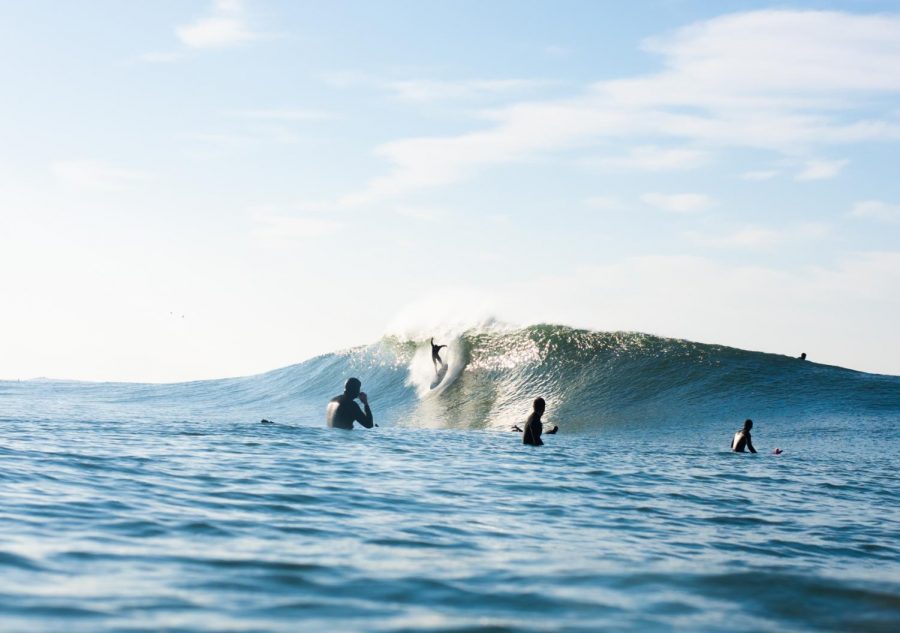 Feb. 22 was an extraordinary day at the beach. Waves the size of five-story buildings consumed many beaches off the coast of Northern California, creating great photo and video opportunities for photographers, especially at Mavericks Beach. However, despite the fact that the past month’s monstrous waves were magnificent subjects in pictures, they have also had quite a disastrous impact on beachgoers. On Jan. 10 in Santa Cruz Harbor, 12 children were rescued from the water, according to CBSN Bay Area. This was only the beginning of a unique season of swells. From Ocean Beach to Fort Cronkite and beyond, Northern California beaches provided endless masses of large waves. These harsh conditions created a menacing environment for beachgoers.

For surfers like senior Pearl Thompson, the Bay Area beach scene is quite familiar. While surfing a few times a week, Thompson has noticed an increase in tragedies occurring due to the large waves this season.

“There have been people who get swept out and haven’t been found just because the waves are so big. There’s a lot of sneaker waves that are coming onto the beach and getting people,” Thompson said.

Sneaker waves, disproportionately large coastal waves that can sometimes appear in a set without warning, are known for being impossible to predict and for surging high up on the beach with deadly force. They prompted several Bay Area first responder searches and attempted rescues for those who were swept into the ocean.

In January alone, there were a multitude of Northern Californian sneaker waves, resulting in nine deaths, according to The Mercury News. In Sonoma County, on Jan. 3, a 40-year-old man died trying to save his two children who were caught in a sneaker wave according to ABC7 News. In the Marin Headlands, a San Jose man was pulled into the ocean by a sneaker wave on Jan. 10’ his remains are still missing according to NBC Bay Area. On Jan. 18, a 12-year-old was swept out to sea at Half Moon Bay according to San Fransisco Chronicle. The Coast Guard searched until 1 a.m. and again at day break, but after a ten mile radius search for the boy, the crews were unsuccessful.

While many surfers are avoiding the water, photographers like senior Jack Bober find great success due to the large waves.

Though future conditions remain unpredictable, in past years, the Northern California swell decreased during the summer, while fall, winter and spring had consistently large swells. Storms that often occur thousands of miles away are responsible for generating waves, and the size of the wave is dependent on the strength, duration and windpower of the storm, according to Mavericks Surf Company. Storms of the highest energy occur in the winter, making it the season with the biggest swell. Smaller summer swells historically make for a more friendly beach environment.

Meteorologists like Rodger Gass, the lead forecaster at the U.S. National Weather Service, are urging beachgoers to take precautions for their own safety.

“The beaches are not safe for anybody right now,” Gass said to the San Francisco Chronicle in January. “If anyone’s going to go out to the ocean, stay well back from it or stay in your vehicle and just look at it from the roadside.”

Despite the dangers, the big swells are providing once in a lifetime opportunities for surfers. Mavericks Beach, located in Half Moon Bay, is notorious for its giant waves and surf competitions.

Redwood surfers take notice as the Northern California beaches attract surfers from around the world. Senior Joey Quirk, who has been surfing since he was five, says the conditions have been a surfing magnet recently.

“The waves have been giant recently. Pro-surfers from Hawaii have come down to just surf in the Bay Area,” Quirk said.

While Quirk has always been a consistent surfer, an influx of teens and adults have taken up the sport during the COVID-19 pandemic. The growth rate for surf hardgoods (surfboards, leashes, fins, etc.) quadrupled from 25 percent in February 2020, all the way up to 113 percent in June 2020, and has been growing steadily ever since, according to ActionWatch, a company that collects, aggregates and analyses data provided by a wide selection of Surf and Skate retailers.

Redwood surfers are no exception to this; they are known for riding the waves of Fort Cronkite, Ocean Beach and Bolinas, planning their surf-schedules around the swells.

Ocean Beach, a well-known surfing spot in San Francisco, is famous for its large waves and is popular amongst advanced surfers like Quirk, but this season’s large swells have forced even the most experienced surfers to avoid it. Quirk has been making changes to his surfing schedule due to the conditions.

“I’ve never been able to not surf Ocean beach for five consecutive weeks so that means it’s been really big consistently,” Quirk said.

Instead of surfing Ocean Beach, Quirk has been riding the waves at Fort and Bolinas, two beaches that are more sheltered from bigger swells; Fort Point is protected because of its location at the end of the Golden Gate Channel and Bolinas has a reef slowing the large waves.

But even sheltered beaches are having noticeably larger swells this season. Thompson, who is a frequent Bolinas surfer, sees this in “The Patch,” a popular surfing spot in Bolinas.

“This year the large swells have affected Bolinas more noticeably to me. When it’s big I’ll go to the patch and even getting over there can be a challenge because the waves are so powerful.”