As 600 Gallons of Petroleum disperse into San Francisco Bay, stress permeates throughout the Richmond community 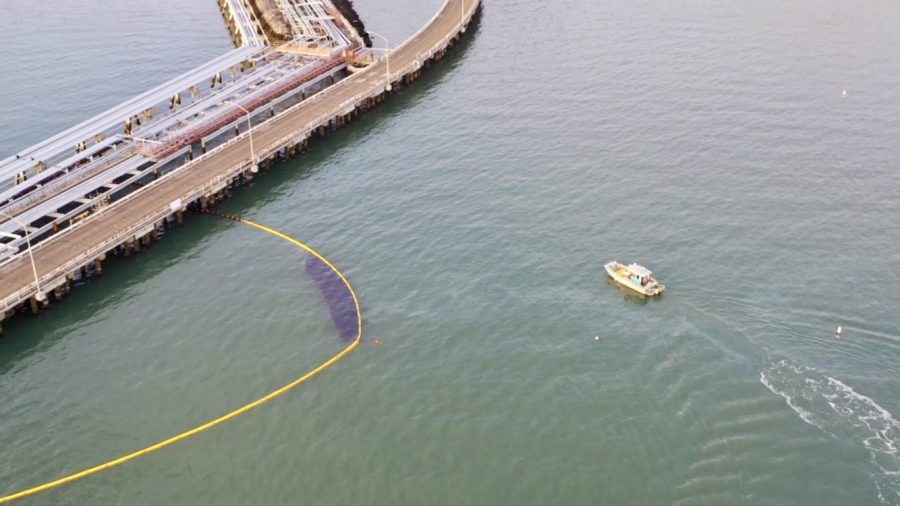 Quick to the scene, clean up crews place an oil absorbent boom alongside the Chevron wharf that the spillage occured (photo courtesy of Cole Burchiel).

On Feb. 9, alarms sounded to the U.S. Coast Guard and several ocean pollution clean-up organizations as a rainbow sheen of oil dispersed into San Francisco Bay from a petroleum product leak at the Chevron refinery in Richmond. Chevron reported the spill around 3:30 p.m., and ocean cleanup crews rushed to the scene where five gallons of oil gushed into the bay each minute for the following hour. Although the cause of the leak is still under investigation, Chevron estimates that about 600 gallons of low-sulfur diesel and flush water mix were released.

As containment teams worked into the night to prevent further spread, Baykeeper, a non-profit dedicated to protecting San Francisco Bay from pollution and other marine threats, began to analyze the spillage as well as the containment process. Baykeeper Field Investigator and Science Associate, Cole Burchiel arrived at the scene at 4:30 p.m. and stayed for the majority of the initial response.

Using a drone, Burchiel was able to examine the response to the spill and catalog the spread of the pollution to make sure nothing was missed. Drones are one of Burchiel’s primary investigative tools.

“[The spill] was best exemplified by the drone which highlighted the scope of what actually occurred,” Burchiel said. “It was a pretty substantial spill, so having that resource allowed us to confirm the actual scope of the problem we were looking at.”

While no significant findings have been released in the investigation, Burchiel assumes that the spill was caused by degradation in one of the heavily used pipelines. The fossil fuel industry has a poor track record for maintaining infrastructure in a safe and usable way, and the Richmond refinery itself has caused numerous tragic accidents due to deficient facility upkeep.

“The fact that [the spill] was not more catastrophic is almost a feed of pure luck,” Burchiel said. “They transport so many different types of products within those pipelines, both to and from the facility. The fact that it was a diesel mixture, which is significantly less caustic than a heavy fuel or crude oil, is very lucky.”

While no animals coated in oil have been reported, Burchiel expresses concern about the various critical wildlife habitats immediately adjacent to the Chevron facility that rely on clean water.

“There’s really no acceptable amount of oil in the Bay or oil product in the Bay. Anything that goes in there is going to have a deleterious effect on the ecosystems,” Burchiel said.

According to the U.S. Coast Guard, the Chevron refinery spill is considered a small spill because it released less than 1,000 gallons. Burchiel explains that because it was a more volatile substance, the spill was less problematic. Regardless of the amount of oil lost, the spill still serves as an immense nuisance for Richmond residents.

“At the end of the day, these types of incidents highlight the fact that a relatively unregulated facility exists in the middle of this highly populated urban area,” Burchiel said.

Contra Costa County officials responded to the incident with a health advisory that was emailed out to residents at 3:50 p.m on Tuesday. The advisory was lifted at 9:00 p.m. that evening. The East Bay Regional Park District proceeded to close nearby beaches until Wednesday afternoon. However, residents still express concern.

Many upset residents, especially those living on the shoreline by the refinery, are banding together as a community to hold Chevron accountable for the incident. Locals have already begun comparing notes and trying to compile evidence from witnesses in the neighborhood to prove Chevron at fault. Suzie Towns, a local who resides along the water, feels skeptical about the facts that Chevron has released and wants to understand exactly what happened.

“There are a lot of people who want to get their questions answered,” Towns said.

Similarly, Senior Kodey Moore, co-president of Redwood’s Environmental Action Club, is dismayed by the carelessness of Chevron to allow accidents like these to occur.

“The first animosity I had towards [the spill] was that for the Chevron oil refinery in Richmond, this is not the first time an accident has happened,” Moore said.

Reflecting on another infamous refinery accident in 2012, Moore recalls witnessing the thick gray cloud of smoke that coated Richmond after a significant fire erupted within the refinery hospitalizing over 15,000 people.

“I remember looking [across the bay] towards Richmond and getting an Amber alert that my dad read out to me. I was only ten and it was very scary,” Moore said.

As investigators continue setting their facts straight, organizations including Baykeeper hope to seek retribution from Chevron because of their actions. However, environmental advocates like Burchiel believe that the Richmond community faces a core affliction deeper than the spill.

“The issue does not stop when the spill is cleaned up, [the refinery] is a persistent issue that Richmond deals with on a daily basis, even when there is not a catastrophic spill,” Burchiel said. “We need to take an interest as a community at large, and resolve [refinery-related issues] for the betterment of our future.”