NFL review: a season of broken records and broken bones 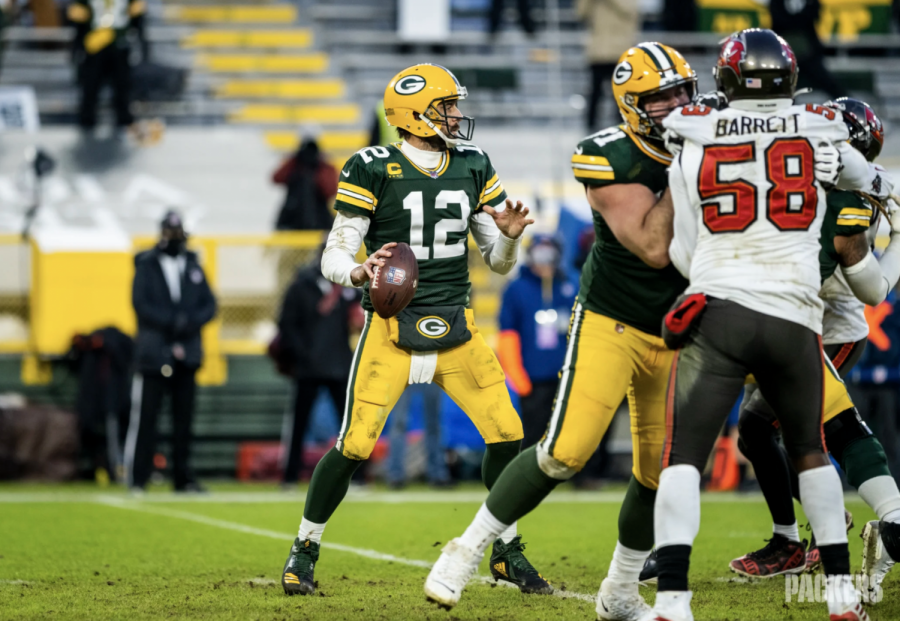 Courtesy of the National Football League

The 2020-2021 National Football League (NFL) season brought viewers an array of nail biters and highlight reels, despite concerns over the safety and logistics of allowing a football season to proceed during COVID-19. The NFL managed to carry out games in one of the most hectic and memorable seasons in history, representative of the year in which it took place. Many teams had coronavirus outbreaks within their organizations, resulting in the league holding games on all days of the week for the first time ever. Meanwhile, injuries disrupted most of the season; this can be attributed to the shortened off-season and lack of pre-season games.

Some of the best players in the league were taken out for the year after being injured at the start of the season. Saquon Barkley, Nick Bosa and Dak Prescott all suffered season-ending injuries early in the year, putting their respective teams at a disadvantage. Bosa was a top candidate for Defensive Player of the Year, Prescott threw an NFL record 1,690 yards in his first four games and Barkley was already a consensus top ten running back in the league in only his third season. These early injuries caused speculation for the possible impact that no pre-season games and limited organized team activities (OTAs) could have on players. In October, Steelers safety Minkah Fitzpatrick told the Pittsburgh Post-Gazette that he believes that limited conditioning is bad for the players’ health.

“Even though all of us have been playing football for our entire lives, we still need that time to acclimate our bodies to that ground and pound, especially our tendons and ligaments, stuff you have to condition.” Fitzpatrick said, “ If your body isn’t conditioned to it … a running back goes out there and runs the ball 20 times and gets beat up, that’s tough. You’re definitely going to see a lot of injuries across the board.”

Having lost many star players, this year’s league leaders in offense and defense were both familiar and new. Deshaun Watson led all quarterbacks with 4,823 passing yards but has now requested a trade after a 4-12 record and a lack of involvement in the Houston Texans’ organization decisions. Derrick Henry, Dalvin Cook and Alvin Kamara all dominated the running back stat lines, with Henry scoring 17 touchdowns and Cook and Kamara each scoring 16 in their career seasons. Henry repeated as the league’s rushing leader with a whopping 2,027 rushing yards, the eighth player to reach 2,000 yards in NFL history, and on Dec. 25, Kamara ran for six touchdowns, which had not happened in a game since 1929.

In another statistical category, this season’s receiving leader was Stefon Diggs, who had the best season of his career with Josh Allen and the Buffalo Bills. This season, the top defensive players saw new faces across the board, as Xavien Howard, T.J. Watt and Zack Cunningham topped the charts for interceptions, sacks and tackles, respectively.

Along with the league leaders, this year’s rookie class brought immense talent to the NFL, especially on the offensive side of the ball. Justin Jefferson and Justin Herbert each had incredible rookie seasons in a tight race for Offensive Rookie of the Year. Jefferson broke Randy Moss’s Vikings and Anquan Boldin’s NFL rookie receiving record after securing 1,400 yards in 16 games. Herbert became the fastest rookie to reach 30 touchdowns, notched 379 completions for an NFL rookie record, and scored 36 touchdowns for another NFL rookie record. Jefferson and Herbert were not the only rookies to show off their immense talent. Rookie running backs all over the league gained attention with their exciting skill, including James Robinson, Antonio Gibson, Jonathan Taylor and Clyde Edwards-Helaire. Second overall pick Chase Young was another young player who impressed this season, helping lead Washington’s defense throughout the regular season and into a playoff spot.

The Green Bay Packers and Kansas City Chiefs earned the number one seed in their divisions, led by the top two Most Valuable Player (MVP) candidates, Aaron Rodgers and Patrick Mahomes. After the Packers decided to take a quarterback in the first round of the 2020 draft––passing on the numerous talented receivers despite Rodgers’ expressed desire for an additional receiver––Rodgers exceeded expectations and had one of the best seasons of his career. He was number one in touchdowns, completion percentage and quarterback rating while throwing only five interceptions through 16 games, which was less than any other quarterback. Rodgers was able to throw to the talented pass catcher Davante Adams, the clear best ESPN fantasy receiver, leading multiple statistical categories after having the best season of his seven-year long career.

The Chiefs continued their dominance with a 14-2 season led by the league’s best offense. Mahomes had another great season, finishing top five in yards, touchdowns and quarterback rating, throwing only six interceptions. Travis Kelce and Tyreek Hill led the offense alongside Mahomes, both scoring more than ten touchdowns and racking up over 1,200 yards. Kelce broke the record for most yards by a tight end in a single season with 1,407, previously set by George Kittle in 2018 with 1,377 yards.

The playoffs included some exciting storylines, such as the Browns’ first trip to the playoffs since 2002 and the Bills seeking their first playoff win since 1995. Each team won their first-round matchup, but both were beaten in the following two rounds by the Chiefs, the American Football Conference (AFC) champions. Tom Brady and the Buccaneers beat Drew Brees and the Saints in an exciting and historic game. This was followed by the National Football Conference (NFC) championship matchup between Rodgers and Brady, ending with a 31-26 score in favor of the Buccaneers and sending Brady to his tenth Super Bowl appearance. The Buccaneers became the first team in history to simultaneously host and play in the Super Bowl, which took place on Sunday, Feb. 7 in Tampa Bay.

Tampa Bay dominated the game in a 31-9 win over the Chiefs. The Buccaneers defense didn’t allow a touchdown in an outstanding performance against one of the league’s best offenses, racking up multiple sacks and interceptions. Brady took home his fifth Super Bowl MVP and scored three touchdowns, two of which were caught by longtime Patriots teammate Rob Gronkowski. This win cements Brady’s legacy as the greatest quarterback of all time and caps off what was one of the most eventful seasons in NFL history.