What does the future hold? The stars may show us 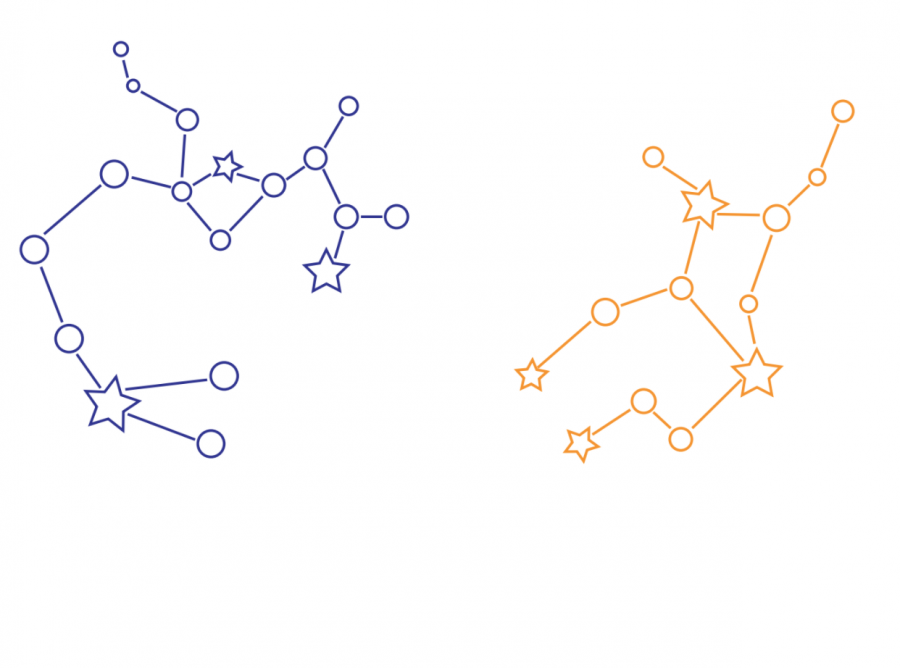 In a time of unpredictable isolation, people are looking for guidance in a place humans have turned to for 2,400 years: the stars. Business Insider reported in December of 2020 that the astrology industry was booming at $2.2 billion despite the United States’ pandemic-induced economic recession. It seems that isolated Americans have used this extra time to reflect on their past and attempt to predict the future.

Astrology studies how the positions of celestial bodies at a person’s time of birth impact their character and fortunes. Astrologers record which zodiac signs and planets were in relative positions to each other at the specific minute and place of birth. Each planet determines a different aspect of a person’s life and each zodiac sign has distinct characteristics; a birth chart lays out a unique prediction of which traits dominate each section of one’s life. Most people know their zodiac sun sign, which corresponds to the sun’s placement on their date of birth. However, astrological charts provide a more holistic examination when viewed as a combination of multiple planetary positions at the time of one’s birth.

Many Redwood students, such as senior Mady Gordon, have taken up learning astrology as a quarantine pastime through books, apps and conversations with friends.

“I feel like quarantine was super introspective for a lot of people… Having  a big concept [such as astrology] that you can really go in depth [with] and learn a lot about was appealing to me,” Gordon said. “Four or five months ago, my friend gave [a book] to me. It’s really interesting to read something like astrology in such a formal textbook. It seems to pretty accurately go super in depth [on different aspects].”

While many discovered their interest in quarantine, senior Natalie Pemberton has been intrigued by astrology’s inexplicable nature since middle school. She uses horoscopes as a source of inspiration and guidance on a day-to-day basis.

“Astrology won’t really tell you the future, but it can give you good predictions to guide your daily life…  If my daily horoscopes say I’m going to be struggling with something that day, usually I try to work on it. If it says I’m going to be unproductive, I’ll try and make time to get my work done instead of just doing it throughout the day,” Pemberton said.
Senior Lo Baker has also used astrology for fun and inspiration over the past year and says the relaxation and certainty of putting oneself in categories appeals to many. She uses apps on her phone to receive updates on what the stars predict for her.

“Obviously we’re isolated, and we’re looking for connections. This is something fun to get into when you can learn about yourself, and you can talk about it with other people. Ultimately it’s like [one big] personality test,” Baker said. “I’ve found that people like to put themselves into the boxes of personalities, and it’s fun to say, ‘oh, it makes sense why I’m like this, it’s because of this outside force.’”

The most commonly recognized sign, the sun sign, is said to describe the traits a person values most in themselves. Despite astrology’s seemingly random assessments, Baker believes her chart matches her personality.

“I’m a Virgo, and I do think it is very accurate. I am not sure if it is me growing up knowing that I’m a Virgo and subconsciously fitting the role, or perhaps it is [really] because I was born [under the sign]. Typically a Virgo’s traits are hardworking, dedicated, very detail-oriented [and a] perfectionist, which I think I fit pretty much to a T,” Baker said.

Beyond the sun sign, every person’s astrological chart has other components corresponding to the exact minute of their birth.

“A pretty common complaint [about] astrology is that a lot of [it] can translate to [most] people, and a lot of people will relate to the broader concepts… But beyond just sun signs, it does get a little bit more specific,” Gordon said. “The rising and moon are equally important.”

A person’s rising sign, determined by which sign is rising on the eastern horizon at the time of birth, is said to describe how others see them. The moon sign is said to describe one’s emotions. Gordon is a Libra rising and says that many have accurately guessed its placement in her chart.

“I don’t typically relate to it, but I’ve heard that some people see me like a Libra, and that’s why it’s a little interesting. One of the [traits] I do relate to with Libra is that I feel like I’m pretty balanced,” Gordon said.

Whether through the stars or their own minds, quarantine has provided people with ample time to change how they view themselves and the world around them. Though many are opposed to astrology due to its lack of conclusive proof, Pemberton isn’t bothered by its uncertainty. In fact, the opportunity to willingly embrace the inexplicable is something many appreciate in a time where unpredictability is unavoidable.

“It’s kind of fun and mysterious. It’s like magic in a way, [with] the same appeal to the unknown as a Ouiga board,” Pemberton said. “It’s comforting to [try to] know a little bit more about myself and the world.”