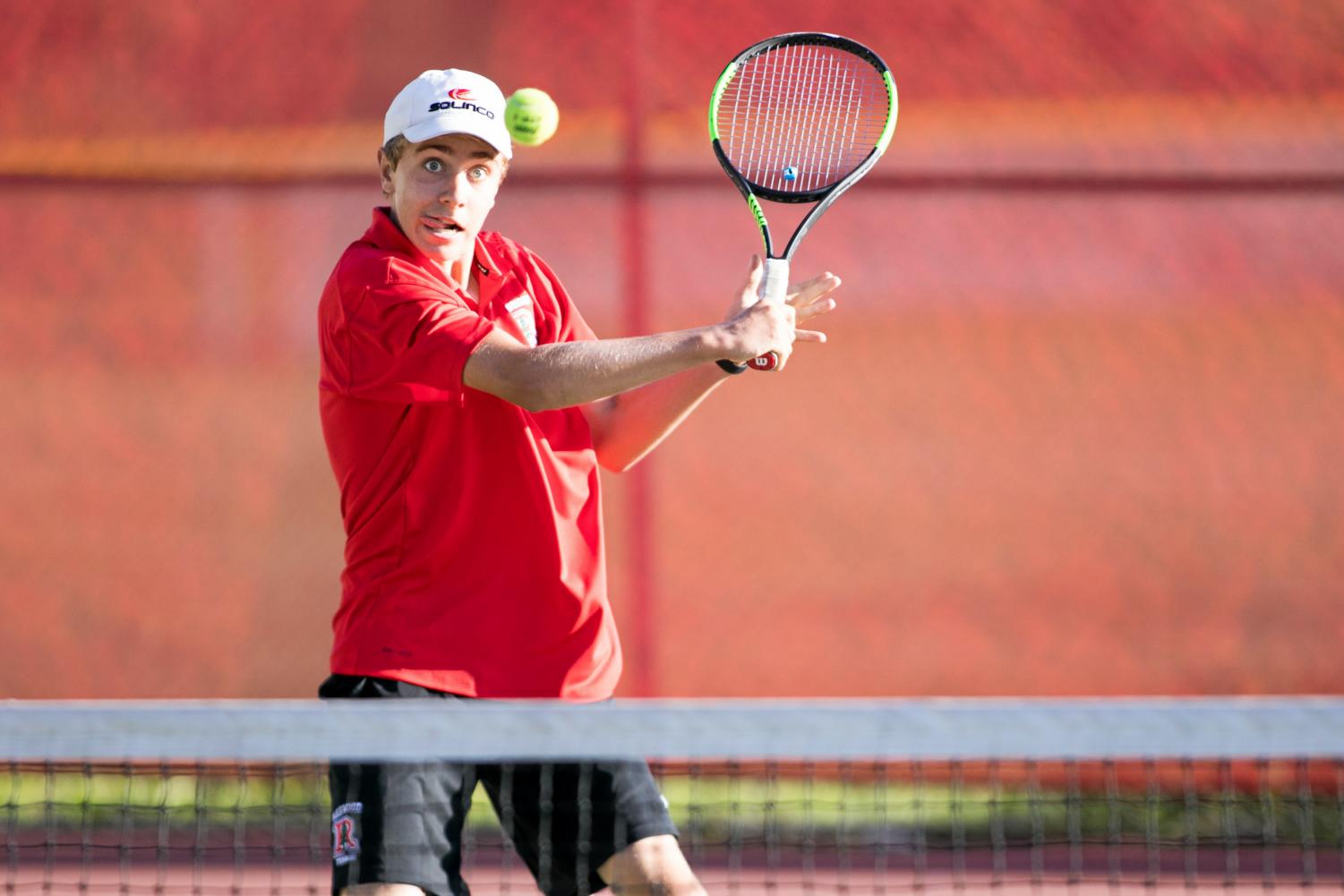 Playing against Tamalpais High School in the 2018 MCAL Tennis Championship, Luke Neal has his eyes on the ball. (Courtesy of Douglas Zimmerman/Special to Marin Independent Journal)

Playing against Tamalpais High School in the 2018 MCAL Tennis Championship, Luke Neal has his eyes on the ball. (Courtesy of Douglas Zimmerman/Special to Marin Independent Journal)

Heart pumping and nerves racing, Luke Neal shuffled to hit the ball as his team watched and cheered from the sidelines. The boys’ varsity tennis team was missing two of their top three players, but in a match that Neal describes as his biggest high school tennis moment, he led the team to victory in the CSF quarter-finals as a freshman.

Neal fell in love with tennis at four years old when his mom encouraged him to pick up a racket. At that time, he never would have imagined that he would eventually be ranked 24th in the country for his age group and have offers from several Ivy League schools by the time he was a junior.

“I just started hitting a couple of balls around and got signed up for some junior clinics. I thought those were a really fun experience and a great way to connect with friends,” Neal said.

Neal found this ability to socialize in many of the sports he played in middle school, including basketball and soccer, but ultimately decided to focus on tennis when he entered high school.

“I was just better at tennis comparably, and I also liked that I could choose when I could play. With tennis, you sign up for a tournament and you’re playing by yourself versus with team sports, the coach decides when you sit on the bench,” Neal said.

Despite Neal’s appreciation for the independence in tennis, Craig Flax, the head coach of boys’ varsity tennis at Redwood, says Neal has always been there for his teammates.

“For the higher-ranked guys like [Neal], it’s pretty easy to choose to disassociate yourself from the team. Just sort of show up and play. But [Neal] never did,” Flax said. “My favorite memory of him was actually in practice when he was playing with a friend of his, Zachary Gerstenfeld. They were out there having a really good time, and Zach was giving him a run for his money on a couple of points. Zach’s game when he was hitting with [Neal] was unlike anything I had [seen] before from him.”

Beyond his ability to push his teammates to play better and his outstanding sportsmanship, Flax admires Neal’s mental game and competitive spirit. Flax attributes these qualities to Neal’s power as a player.

“He’s a workhorse; he does whatever it takes to win. He has probably the strongest mental fortitude of anybody that I’ve ever coached,” Flax said.

Waking up at 6:30 a.m. to work out before school and then heading to practice for three to four hours afterward during a typical day, Neal’s strength doesn’t end with his mental grit. He makes sure that he is a force to be reckoned with on the court.

“I don’t want anyone to outwork me. So I’m putting as much effort as I can at each point and really trying to make it difficult on the opponent if they’re winning,” Neal said.

Throughout Neal’s entire tennis career he has had this iron mindset causing him to achieve constant success. He was named Marin Independent Journal’s tennis player of the year as a freshman and won the Daniel Scafidi Junior Sportsmanship Award in 2019, which is presented to an extraordinary youth player for great sportsmanship. With a 25-13 record, Neal has secured a spot on Yale University’s tennis team and plans to pursue environmental engineering in the future.

During his time playing for Redwood, Neal helped lead the team to victory in NCS two years in a row, ranking them top 10 in the whole country in the process. A friend and former teammate, Dylan Kapur recalls winning NCS alongside Neal.

“Winning NCS is my favorite memory with [Neal]. He was playing two singles, and he clinched the win for us. Everyone was so happy, and although we were expecting to win, [Neal] fought through it like any other game,” Kapur said.

Reflecting on his time playing alongside Neal at Redwood, Kapur believes –– similarly to Flax –– that it’s Neal’s mindset that sets him apart from other players.

“He’s a great player both physically and technique-wise, but also mentally. He’s really optimistic. He’ll set his mind to a goal, and he works super hard to achieve that, and that’s why he’s had so much success,” Kapur said. “It’s all about a willingness to work hard and stick with it.”