While some view creatine as a simple all-natural booster, others see it as the closest legal thing to steroids, with the NCAA even going so far as to ban collegiate athletic programs from giving it to athletes. 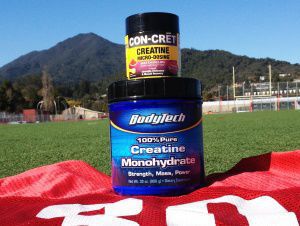 Ever since its introduction as a performance enhancer almost 20 years ago, the supplement has been surrounded by questions regarding its legality, safety, and effectiveness.

Creatine is a natural amino acid found in the body, but many athletes consume the compound in powder form to achieve short bursts of strength before workouts or to help recover from physical activity.

Because of the weight and muscle gains associated with the supplement, it is especially popular among bodybuilders, baseball players, and football players.

However, these muscle gains are far from instant as the beginning stages of creatine consumption usually involve a gain in weight, but not muscle.

The initial weight gain is due to the increased amount of water absorbed by the user’s muscles, according to Dr. Scott Hoffinger, the Chief Associate of Pediatric Orthopedics at Stanford.

Sophomore Mason Jacobs, a football player, took creatine in the powder form during his freshman year, and claimed he saw significant results.

“I gained a lot of weight while I was on it, and I didn’t lose any when I stopped using it,” he said.

Because of the supplement’s effectiveness and popularity, combined with what could be considered unethical performance-enhancing qualities, the NCAA banned colleges from supplying creatine to its athletes, although athletes can still take it independently.

“I understand why they’d want to ban it. It gives the people who use creatine such an advantage over those who don’t use it,” Jacobs said.

Dr. Hoffinger believes that creatine belongs in the same category as other protein powders and similar supplements.

“I think there’s a line between nutritional supplementation and hormonal manipulation,” Hoffinger said.  “I see creatine and protein powders as ways of augmenting a healthy diet, as opposed to drugs or steroids that can really mess up your body’s equilibrium,” Hoffinger said.

According to one study, an estimated 40% of collegiate athletes have reported using creatine.  The high numbers of users come at a time when questions remain about the safety of the substance.

Hoffinger said he thinks moderate use for athletic performance is safe, despite some uncertainty surrounding the supplement.

“I see more cases of kids overdoing it at practice, running or jumping, than overdoing it with creatine,” he said.

Much remains unknown about the long term effects of the supplement on teenagers, as no complete, reliable tests have been conducted on subjects under the age of 18. Yet doctors around the world continue to speculate about possible liver and kidney damage, as well as the dangers of creatine powder contaminated with steroids to give the user a bigger competitive advantage.

For example, 14 high school football players were hospitalized two years ago due to muscle swelling and dehydration that was believed to be caused by creatine.  Three of the players had to undergo emergency surgeries to relieve the swelling and pressure.

Jacobs, however, said he thinks the safety concerns are unwarranted.

“I don’t think it poses any health threats because it’s not synthetic,” Jacobs said. “It’s a naturally-occurring substance.”

Like Hoffinger, Dr. James Gamble, Professor of Orthopedic Surgery at Stanford, said he thinks that creatine can be used effectively for athletic training.

“Creatine coupled with a resistive exercise program can lead to a rapid increase of strength and endurance,” he said.

Although he believes in creatine’s positive impacts, he would not recommend it to someone looking for a boost in workouts.

“It doesn’t have any long term results.  It’s very short term, and a short term solution is often not the best solution,” Dr. Gamble said.