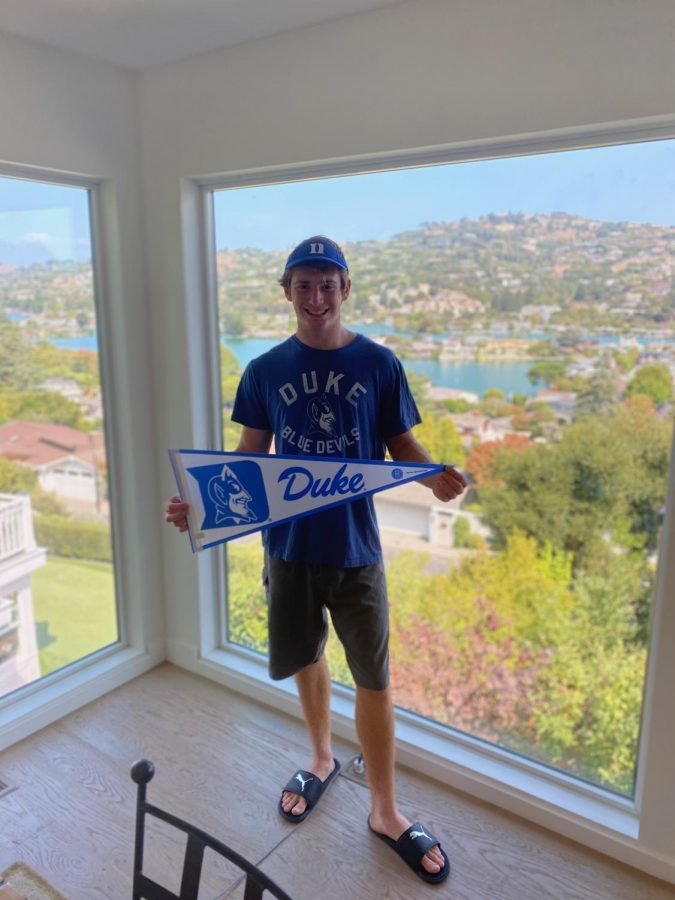 For many, participating in just one track and field event is challenging. However, senior decathlete Jackson Moseley regularly competes in a staggering 10 different events: the 100-meter dash, long jump, shot put, high jump, 400-meter dash, 110-meter hurdles, discus, pole vault, javelin and 1500-meter run. Since sixth grade, Jackson knew he was an exceptionally fast runner, but he never imagined that by his senior year he would have committed to Duke University as a Division I decathlete.

Jackson did not always run track and field growing up. According to his dad, Vince Moseley, Jackson participated in all sorts of sports when he was younger.

“He played basketball, soccer and ran cross country,” Vince said. “In those sports, he was fairly fast. That made him more interested in trying out for track and field and competing in some of the running events.”

Even with a variety of sports under his belt, Jackon’s parents knew he was going to be a natural at track and field since he was already outcompeting his opponents throughout elementary school.

“[Jackson] was actually in a running event at his school that was held once a year. He was in third grade or fourth grade, maybe even fifth grade. He won the championship, and so I think that’s when we noticed that he has a knack for being pretty fast and quick,” Vince said.

Unlike most, Jackson did not start training for the decathlon until his junior year. Throughout his underclassman high school years, he wanted to specialize in only two events: the pole vault and the 100-meter dash. However, after attending a practice meet and trying the decathlon, Jackson soon realized he was a natural. Shortly after his debut as a decathlete, he was contacted by several college coaches attempting to recruit him to their schools.

Due to the small number of decathletes and coaches specializing in decathletes in Marin, Jackson travels to Walnut Creek four days a week to train for the past 4-5 months. He trains with fellow decathlete and senior at Acalanes High School Lukas Xenakis.

Xenakis, who is committed to  Washington University in St. Louis, a Division III school in Missouri, has found that training with Jackson has been beneficial to both of their growth as decathletes.

“It’s really fun to be around [Jackson] because we play off each other,” Xenakis said. “I calm things down and focus on the more technical [side], and he goes so hard to push for more practice reps. We really complement each other and our workout and work ethic styles.”

Xenakis feels as though Jackson always brings a lot of intensity to training and is not afraid to go the extra mile to improve.

“[Jackson] is very highly energetic, optimistic and enthusiastic. If you’re on the track and you don’t want to do an extra 400 intervals, he’s the one who’s going to say you have to do it because you want to get better,” Xenakis said. “We joke with him. We call him the ‘Energizer Bunny.’”

Although frequently traveling all the way to the East Bay for training is difficult on, he believes his commitment to Duke makes the long haul worth it.

“My social life has diminished the more I have to practice,” Jackson said. “Committing to Duke was kind of a payoff. That was kind of the reward.”

As Jackson looks forward to continuing his track career in college, Vince concludes that Duke will be the ideal school for him as his future Duke track coach, Shawn Wilbourn, is a decathlete himself.

“Sean Wilburn has trained a lot of successful decathletes and Shawn Wilbourn’s past experience, his successful training, and past of being a decathlete sold Jackson to commit to Duke,” Vince said.

Jackson will continue his training in Walnut Creek until August of 2021 when his training will move to Durham, North Carolina to begin his college experience at Duke University.