Katherine Ritter makes a scene with her stellar acting 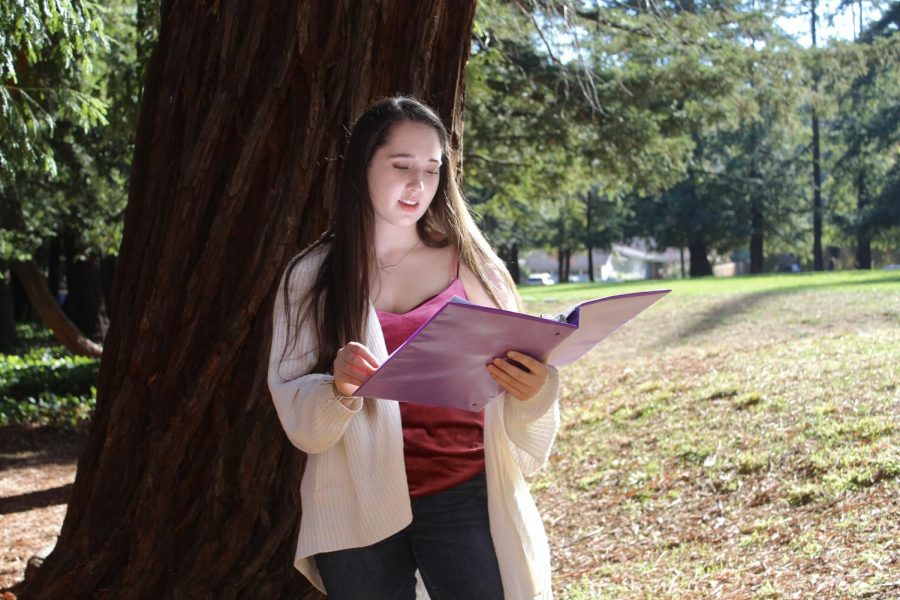 A wedding planner organizes her own impending nuptials. A young boy discovers what it truly means to be a “good man.” A realtor moderates a spelling bee competition she won years before. These three occurrences have something particular in common: they are all fictional roles played by junior Katherine Ritter, an actress and dancer.

Ritter began her journey performing onstage in elementary school, enrolling in dance classes and theater productions after being inspired by a showing of “Evita.”

“Watching [the] story unfold, especially at a young age, it was really magical to watch and to take in,” Ritter said. “I remember telling my mom after the show, ‘I want to do that, I want to make people feel the same way that I felt after I watched the show.’”

Since then, Ritter has been in about a dozen shows, many of which were produced or directed by Steven Hess, co-founder of 23 Elephants Theatre Company. Hess and Ritter first met when he was working at Throckmorton Theatre, and over the years, he has seen her grow as a person and actress.

“She’s always been a really sweet little kid, and she’s gone from there to being a genuinely good, nice person,” Hess said. “On top of that, she pursued acting and performing in the same [scrupulous] way, and [she has] gotten really, really good [at both].”

Hess was especially impressed by Ritter’s performance as Rona Lisa Peretti in the 23 Elephants production of “The 25th Annual Putnam County Spelling Bee,” a lively musical with audience involvement.

“When she did ‘[The] 25th Annual Putnam County Spelling Bee,’ she came alive. She was such a genuine performer, and her performance was so funny and heartwarming. It was a really wonderful performance. It was one of my favorite things that I’ve ever seen,” Hess said. “She just hit all the right marks and all those different acting moments throughout the show.”

Abby Arenberg, a sophomore at San Domenico High School and close friend of Ritter through dance and theater, also admires Ritter’s talent as a performer as well as her attitude about acting.

“Whatever role she’s in, she really dives into it, and she doesn’t hold anything back. When I’m in shows with her, she takes notes really positively and dives into her character and portrays it to the fullest, whatever that looks like,” Arenberg said.

Ritter is currently enrolled in three EPiC drama classes at Redwood: stagecraft, honors theater directing and advanced drama. Though they cannot do plays at the moment, Ritter participates in workshops to learn more about dancing and professional theater. In honors theater directing, Ritter introduces beginning drama students to acting through improvisation, games and short plays.

“[In the class, you are] just making the students feel more comfortable and excited about theater and making theater, and [you help them with] understanding the work that goes on behind the scenes and the depth of each character,” Ritter said.

According to Ritter, this work in theater, both behind the scenes and on stage, involves analysis and creativity.

“[Theater] is very much a creative process. A lot of the time we are [working on] understanding character motives, breaking down pieces of work and creating our own pieces of work,” Ritter said.

Ritter also stresses the importance of being completely vulnerable to connect with the audience and other actors. She feels that the camaraderie at Redwood creates the perfect place for this.

“I don’t think there’s been a single day that goes by [without us] bursting into laughter in drama. It’s a really supportive community,” Ritter said. “I just think everyone is super friendly and super accepting of each other, and it makes it a great environment for people to be really vulnerable and take risks in front of each other.”

Ritter’s lively and humorous nature, according to Arenberg, likely plays a role in the positive setting of EPiC. However, her ventures in theater have also had a beneficial effect on Ritter’s personality.

“I think she’s grown [into] her own self-confidence. She used to joke about not feeling good about herself, and so I think over the years, she’s really come into her own personality and just learned to accept herself and have fun with herself,” Arenberg said. “She has a ton of energy, and she always wants to make people happy and joke with them and laugh with them.”

During class, on stage and in her daily life, Ritter relies on the confidence and lessons she has gained through her time as an actress. Though she does not plan to pursue drama professionally, Ritter does see it playing an important role in her future.

“I think the main thing that drew me to theater was the magic that I felt when I first watched [a show] and a story unfold,” Ritter said. “I just really want to keep it a part of my life for as long as I can.”