Mountain Biking team races back into a new season 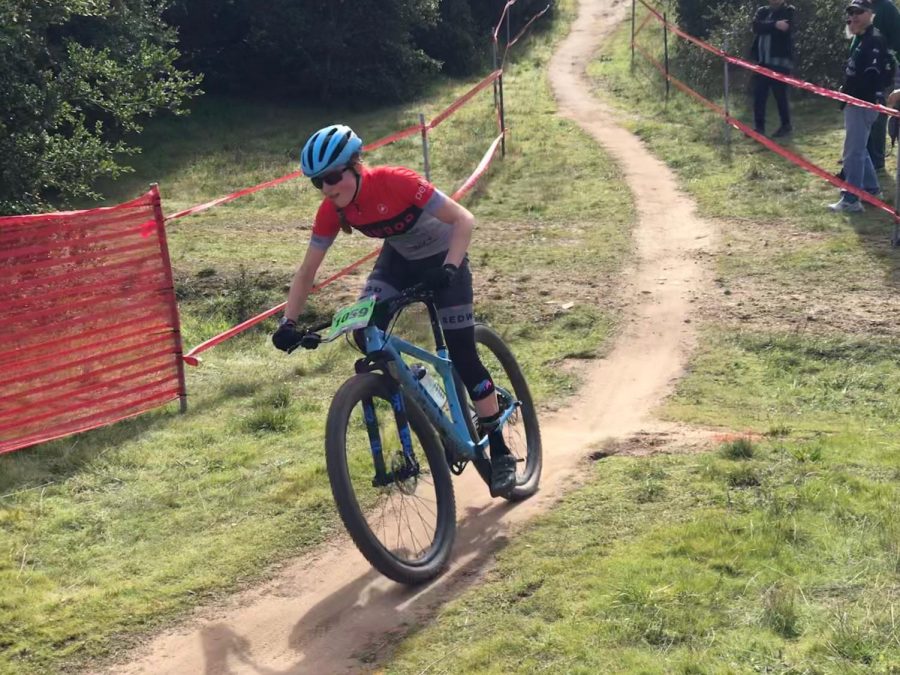 Pedaling as fast as she can, Isabella Heinemann embarks on her final lap at the first 2019 NorCal.

As the looming redwood trees create a shaded canopy over the various fire road trails connecting Larkspur and Ross, the Mountain Biking team members race down the gravelly road in a staggered formation to comply with social distancing rules and train for the 2021 competitive season after COVID-19 related complications. They have been practicing this way since April 3, when the National Interscholastic Cycling Association (NICA) made the executive decision to suspend all NICA related functions and competitions in response to the national pandemic. This was a disappointment for the Redwood Mountain Biking team, especially because they won the NICA NorCal league title in 2019. Redwood has placed in the top five for the past seven years, winning state championship titles for three of them.

While many Marin high schools have mountain biking teams, High School 1327 (formerly known as Drake), Tamalpais and Redwood are amongst the leading teams in the NorCal league. The Redwood team won the 2019 state championships with a combined score of 2,006 points; scoring is based on individual placement, receiving more points for a better position. Redwood’s highest scorers consisted of senior varsity racer Haley Randel coming in second place with 565 points, senior Isabella Heinemann scoring 540 points and junior Vaila Heinemann with 500 points. Because the top eight scores are counted, teammates such as senior Sean Middleton, junior Henrik Brockman and junior Katherine Stein were vital to the team’s success as well. Although the team has a male majority, the girls’ category dominates when it comes to wins and points scored.

The 2020 racing season started in March, but ended early due to COVID-19. Theo Northrop and the majority of the Redwood team that were not part of seperate national development groups only got to participate in one race, the Swasey Recreation race in Redding, where they placed second.

“There’re a lot of people that show up to the races, and when everybody’s out in the course, it can get pretty crowded. During the races, there ends up being groups of 10 kids riding pretty close together, which could be identified as a social distancing violation,” Northrop said.

With over 75 people signed up for the 2021 season, the mountain biking team is one of the largest teams at Redwood, according to Team Snap.

“We would love to get more girls on the team because last year Drake had 30 girls,”  Stein said. “The girls [on the Redwood team] really bond together just because there are so few of us and it creates a great community to be in.”

Because of large team sizes, NICA will need to start adapting to adhere to state-wide health directives. This includes time trials where individuals race against the clock independently instead of being alongside their opposition, which is more in line with social distancing regulations.

To follow these guidelines while practicing, the mountain biking team leaders have encouraged their members to continue biking while following social distancing protocols. Northrop and other members took advantage of the offseason to continue training.

“I rode with a couple of kids on the team, just people that I knew and that I hung out with before quarantine,” Northrop said. “We wore masks whenever we rode and staggered ourselves, but for the most part, it was fend for yourself.”

While the team has had to adjust to the most recent COVID-19 regulations, the change has not affected the 2021 competition season so far. Currently, the team is meeting virtually on Zoom and going on weekly rides preparing for the season.

For Vaila Heinemann, the Zoom meetings have been especially beneficial because she has not been able to attend as many of the in-person rides due to family health risks. She believes that making introductions on Zoom and educating members about biking and how exercising and staying healthy are important for the upcoming season.

“The head managers of the team are really stoked about trying to bring in more awareness about nutrition and the importance of different aspects on and off the bike and the mental parts of biking,” Vaila said. “Zoom time will hopefully become a pretty important part of the team this year.”

Because of limited social interactions in the past year, Stein appreciates and cherishes the weekly rides with her team.

“Had we actually been able to practice as if there was no COVID-19, there would have been much more team camaraderie, but it is what it is, and we’re making the best of it,” Stein said.