Trick or treat yourself to these Halloween TV show specials 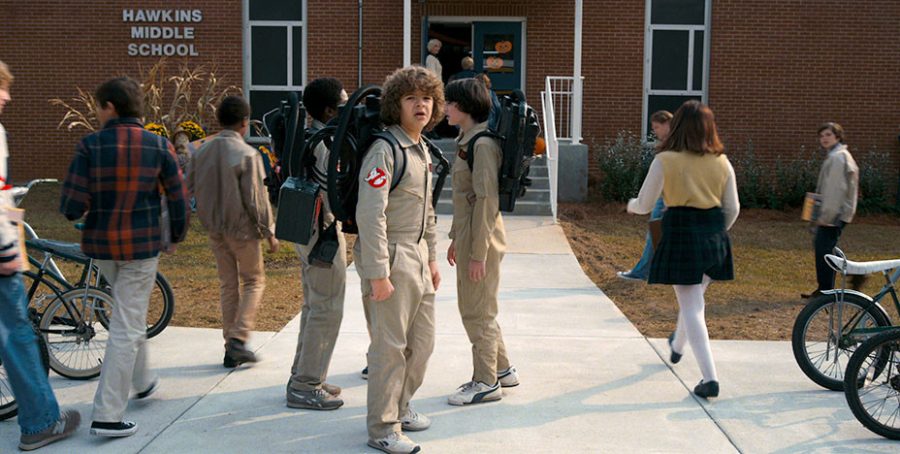 Realizing that none of their other classmates are wearing Halloween costumes, Mike, Dustin, Will and Lucas look at their peers in embarrassment.

As the fall season continues, little kids and teens alike look forward to Halloween, a day celebrated by trick-or-treating, going to costume parties and eating an ungodly amount of Twix bars. However, due to COVID-19 related health restrictions, Halloween is undoubtedly going to be different this year. Even if we cannot participate in traditional activities like trick-or-treating, we can still enjoy television’s take on the holiday; Halloween TV specials provide a great way to get into the spooky spirit. Whether you are in the mood for a sitcom special, a TV series scare or a feel-good fall episode, the Bark has got you covered. Here are some of the best Halloween TV specials.

The Office’s second season presents its first Halloween special, which takes place, unsurprisingly, in the Dunder Mifflin Scranton office. This special centers around the corporate office’s request that Michael Scott, regional manager at Dunder Mifflin, fires one of his employees by the end of the day. Throughout the workday, Michael brainstorms who he must fire by confronting his employees, which leads to hysterical bickering, an absurd role-play and chaotic office pranks. Complete with the characters’ various costumes choices, ranging from Michael Scott wearing a paper mâché head placed on his shoulder to Dwight Schrute, a serious salesman and assistant to the regional manager, as a Sith lord, this episode is sure to get you in the Halloween spirit. In addition to this episode’s costume festivity, Michael’s multiple failed firing attempts add to the ridiculous drama and are sure to get you laughing.

Friends – “The one with the Halloween Party” (season eight, episode six)

After eight seasons of iconic holiday episodes, Friends fans finally received the coveted Halloween episode, and it does not disappoint. In this episode, Monica and Chandler throw a costume party in their apartment. But, of course, the party does not go as planned. Each character deals with a personal struggle which all comes to a head at the party. Whether it was Ross’ confusing “Sputnik” costume (a combination of a potato and the Russian satellite) or a newly pregnant Rachel who gets tricked into handing out dollar bills and checks as a substitute for Halloween candy, this episode’s comedy does not fall short. The wacky costumes, seasonal party decorations and arm wrestling competitions will evoke some nostalgic fall feelings.

The Halloween episode in the second season of Stranger Things leaves viewers feeling eerie and full of suspense. Though this episode contains some light-hearted fall fun, like trick-or-treating and dressing up for Halloween, everything has a dark twist. Centered on Halloween night, each character has different plans on how to enjoy the holiday’s festivities. However, each character’s initial plans are interrupted by their personal fears and doubts surrounding the Upside Down, Eleven’s disappearance and Barb’s death. Although the episode’s spooky tone drives down the episode’s festive factor, the killer 80’s Halloween soundtrack and decorative set design make this episode a must-watch. If you are looking for something scary to watch this October, definitely watch this episode (or binge the entire series on Netflix).

In New Girl’s first Halloween episode, the main character, Jess, is hired as a zombie in a haunted house and invites her friends and casual hookup Sam, who she is catching feelings for. While Jess grapples with her serious feelings for Sam, her roommates find themselves battling new and unresolved feelings. Nick catches up with his college crush, Winston is struggling with his current relationship and Schmidt has a hard time accepting that his ex-girlfriend, Cece, is dating again. Though it seems like all of the characters are at different points in their relationships, when attending Jess’ Halloween event, everyone comes to the realization that they must be honest with themselves and their partners. The fun-filled set created a spooky atmosphere and only added to the Halloween excitement. This episode’s hilarious costume choices, quick-witted banter and haunted house scares will get you excited for Halloween night.